Please join us on Monday evening for our next History of Medicine lecture: 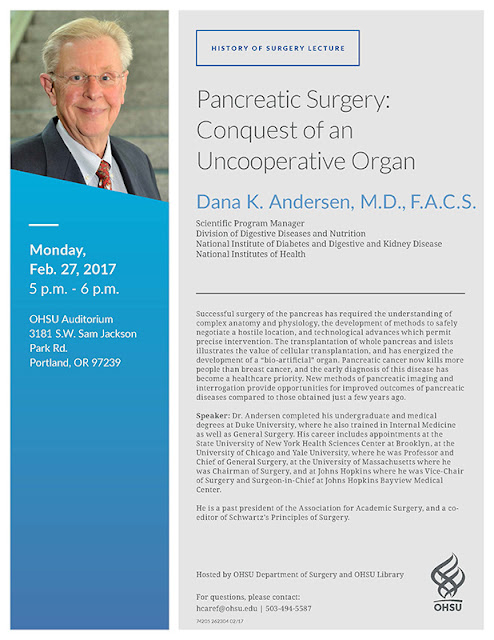 Successful surgery of the pancreas has required the understanding of complex anatomy and physiology, the development of methods to safely negotiate a hostile location, and technological advances which permit precise intervention. The transplantation of whole pancreas and islets illustrates the value of cellular transplantation, and has energized the development of a "bio-artificial" organ. Pancreatic cancer now kills more people than breast cancer, and the early diagnosis of this disease has become a healthcare priority. New methods of pancreatic imaging and interrogation provide opportunities for improved outcomes of pancreatic diseases compared to those obtained just a few years ago.

Dr. Andersen completed his undergraduate and medical degrees at Duke University, where he also trained in Internal Medicine as well as General Surgery. His career includes appointments at the State University of New York Health Sciences Center at Brooklyn, at the University of Chicago and Yale University, where he was Professor and Chief of General Surgery, at the University of Massachusetts where he was Chairman of Surgery, and at Johns Hopkins where he was Vice-Chair of Surgery and Surgeon-in-Chief at Johns Hopkins Bayview Medical Center. He is a past president of the Association for Academic Surgery, and a co-editor of Schwartz’s Principles of Surgery. He is currently Scientific Program Manager in the Division of Digestive Diseases and Nutrition at National Institute of Diabetes and Digestive and Kidney Disease, National Institutes of Health.

Light refreshments will be served before the lecture.

Sponsored by the Department of Surgery and OHSU Library.

Live stream of the event

In 1982, the Centers for Disease Control and the National Cancer Institute announced that what was then known as Gay-related Immune Deficiency (GRID) had "reached epidemic proportions and the totals probably represented just the tip of the iceberg."(1) To make matters worse, despite the reassurance of epidemiologists that no evidence had been found that the condition spread from person to person like influenza or measles, healthcare professionals were often terrified to treat HIV-positive patients.

In the midst of all this, Rosenstein was contacted by his immunologist to say that one of his HIV-positive patients was in need of dental work, but no one would treat him. Rosenstein states in his oral history that the level of homophobia was unbelievable. According to his interview: "patients were talking to me about how doctors would say, 'No, take the magazine. That’s for you to take home' simply because they had touched it."

Yet, Rosenstein and his staff were nonplussed. In fact, he describes working with these patients as a challenge he enjoyed. During one of the greatest highlights of his interview, Rosenstein describes his proudest moment in terms of selecting the right staff. Knowing they were about to receive their first HIV/AIDS patient, Rosenstein called in the county health officer to meet the staff and talk to them about HIV. In describing the meeting, Rosenstein states:

He came over to meet with our staff. And he talked about HIV. And you know, I think this is when it was called GRID. Gay-related Immune Deficiency. It wasn’t even called AIDS or HIV then. And he talked. And he said, “Does anyone have any questions?” And Colleen … she said, “What can we do to make sure that we’re helping them?” And that was the only question. There was no, you know, will I get it, how do I protect myself. The question was, what can we do for the patient?

In this manner, the Russell Street Dental clinic developed an expertise in treating HIV/AIDS patients, and they came from all over the Pacific Northwest including Montana, Northern California, and beyond.

Rosenstein thrived in his work with these patients despite being questioned on the issue by his university colleagues, including the dean. Rosenstein remembered a time when doctors were afraid to treat black patients out of fear of what their white patients would say and responded to these questions with: "the day will come when you can't get away with not treating AIDS patients." And so it did with the passing of the Americans with Disabilities Act in 1990. Rosenstein would go on to lead the establishment of the HIV/AIDS Section of the American Public Health Association.

Throughout his oral history, Rosenstein expresses his wish that the OHSU School of Dentistry would have given a chance to more students of diverse and under-represented groups, including the poor, saying "give them an education. Let them go out and help people." That simply wasn't a priority to the School at the time. Rosenstein predicts in his closing remarks that there will always be people who get left out in the cold in the private healthcare sector and, for that reason, public health dentistry will always be there as a place to care for those patients.

If you have any records relating to the Russell Street Clinic or its predecessor, the Fred Hampton People's Free Health Clinic, and would like to donate them to our archives, please contact Steve Duckworth, University Archivist, at 503-494-0186.