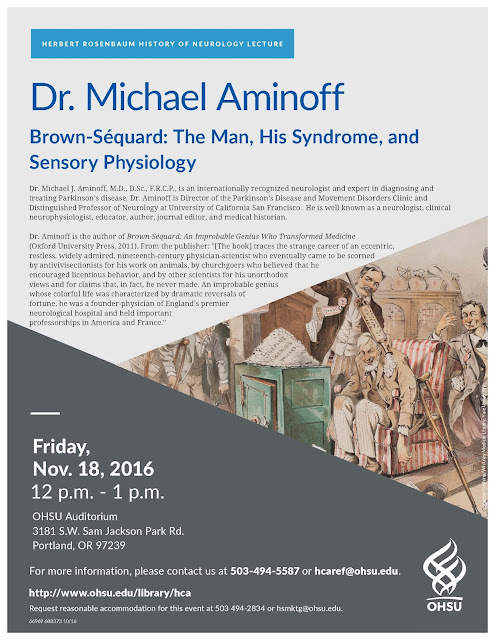 Dr. Michael Aminoff
Director of the Parkinson's Disease and Movement Disorders Clinic , University of California San Francisco
“Brown-Séquard: The Man, His Syndrome, and Sensory Physiology”
Sponsored by the Department of Neurology

Dr. Michael J. Aminoff, M.D., D.Sc., F.R.C.P., is an internationally recognized neurologist and expert in diagnosing and treating Parkinson’s disease. Dr. Aminoff is Director of the Parkinson’s Disease and Movement Disorders Clinic and Distinguished Professor of Neurology at University of California San Francisco. He is well known as a neurologist, clinical neurophysiologist, educator, author, journal editor, and medical historian.

Dr. Aminoff is the author of Brown-Séquard: An Improbable Genius Who Transformed Medicine (Oxford University Press, 2011). From the publisher: "[The book] traces the strange career of an eccentric, restless, widely admired, nineteenth-century physician-scientist who eventually came to be scorned by antivivisectionists for his work on animals, by churchgoers who believed that he encouraged licentious behavior, and by other scientists for his unorthodox views and for claims that, in fact, he never made. An improbable genius whose colorful life was characterized by dramatic reversals of fortune, he was a founder-physician of England's premier neurological hospital and held important professorships in America and France."
View the event on the OHSU Calendar

Can’t join us in person? A live stream of the event will also be available: View live stream
Posted by Meg at 8:29 AM No comments: