May 24th: Variola Vanquished? The Complex History and Legacy of Smallpox Eradication 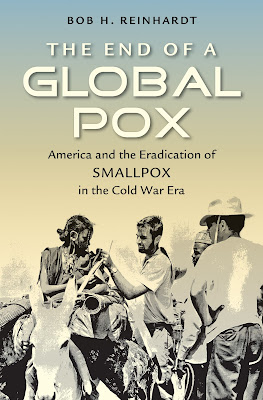 In May of 1980, the World Health Organization declared that smallpox had been eradicated.  But in July of 2014, three forgotten vials of the smallpox virus were found at a laboratory in Maryland.  How is this possible, and how worried should we be?  The End of a Global Pox: America and the Eradication of Smallpox in the Cold War Era explains the causes, development, and legacy of global effort to eradicate smallpox in the 1960s and 1970s—a remarkable transnational attempt to master the nonhuman world that both expressed and transcended the global Cold War and the American liberal state’s emphasis on modernization and development. The eradication program that evolved in this context ultimately produced a world free of smallpox as a disease, yet still haunted by the presence of the smallpox virus in high-security laboratories and in the imagination of people throughout the globe

Bob H. Reinhardt is the author of The End of a Global Pox: America and the Eradication of Smallpox in the Cold War Era (University of North Carolina Press).  He received his PhD in history from the University of California, Davis, and is currently the Executive Director of the Willamette Heritage Center in Salem, Oregon, where he works in the fields of environmental and public history, in addition to ongoing research in the history of public health.
For customized driving, biking, and transit directions to the venue, please visit the interactive OHSU map: http://www.ohsu.edu/map/?id=439&mrkIid=32204

We hope to see you there!
Posted by Meg at 8:51 AM No comments: Links to this post