National Public Health Week post: Firsts from the Oregon State Board of Health

In honor of National Public Health Week, I thought I'd share two items from the history of public health in Oregon, from our Pacific Northwest Archives collection! Here we have two "firsts" from the Oregon State Board of Health: On the left is the very first biennial report of the Oregon State Board of Health to the Governor of Oregon, published in 1905, and on the right is the board's first bulletin, "The story of small-pox in Oregon and its testimony to the value of vaccination", published in 1903.

These publications provide a fascinating window into the primary concerns of the state's early public health officials. According to the first Biennial Report, the Oregon State Board of Health was created by the Legislative Assembly of 1903, which is noted as the same year that the National Conference of State Boards of Health adopted a standard set of birth and death blanks to be used in vital statistics forms for the United States. As you can see from the numbered list below, infectious disease and sanitation were mainstays of public health activities one hundred plus years ago. 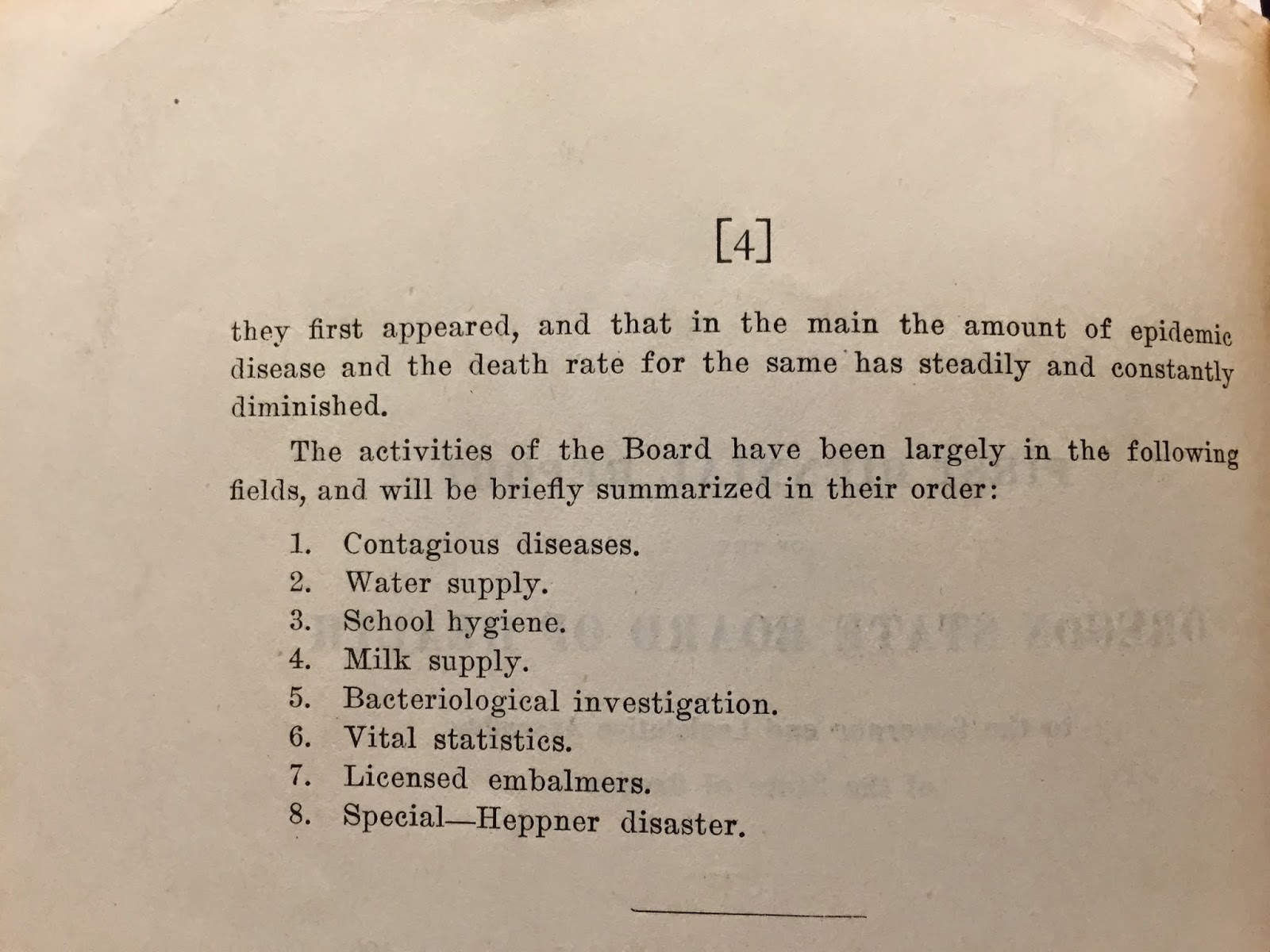 What struck me was the prominence of issues of simply ensuring clean supplies of water and milk to the population. Thinking about the date, I realized that milk pasteurization wasn't widespread in the United States until several decades later! 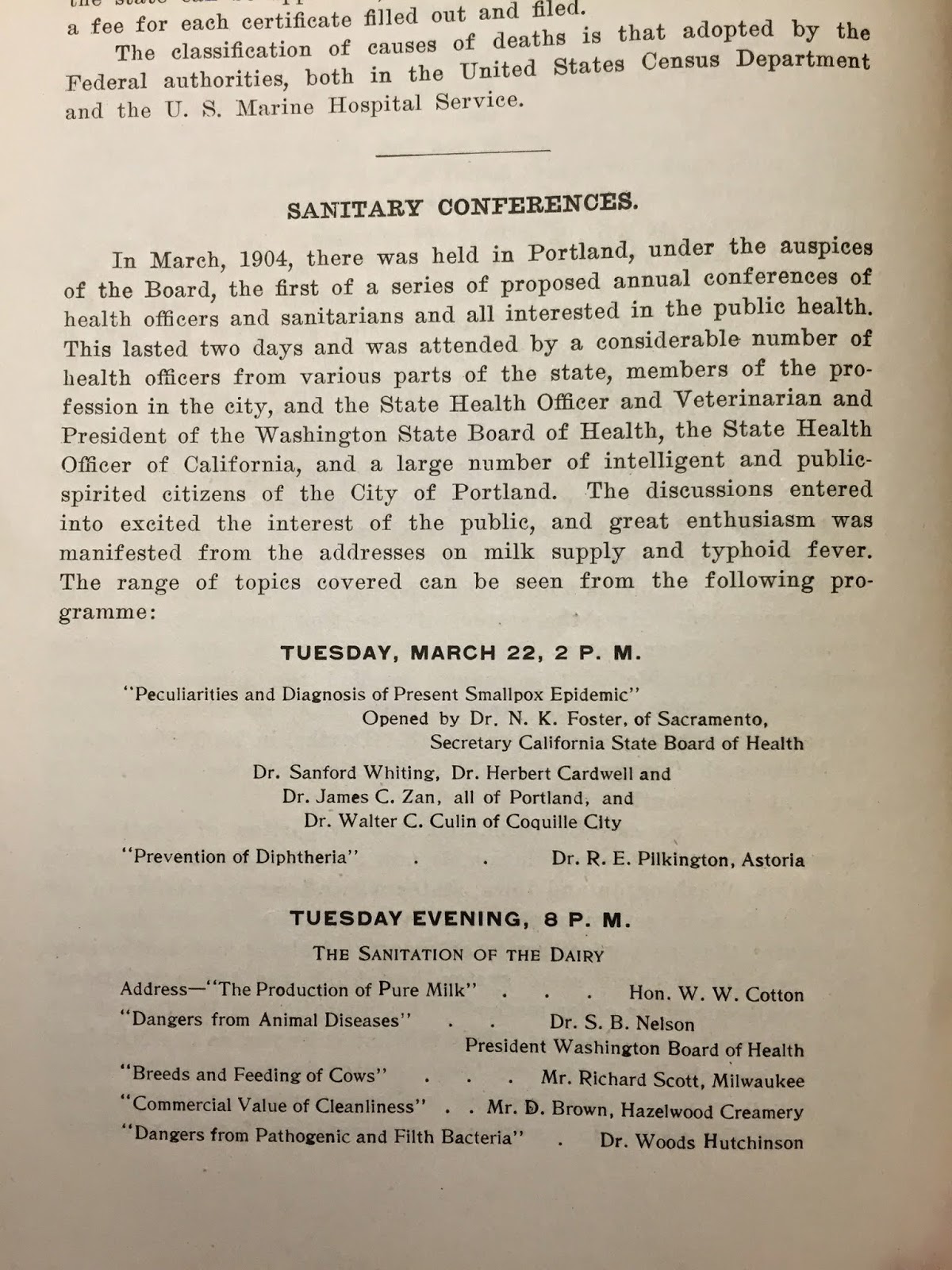 Bulletin No. 1 for the Oregon State Board of Health concerns what was then a continuing epidemic of smallpox in Oregon and in other states. 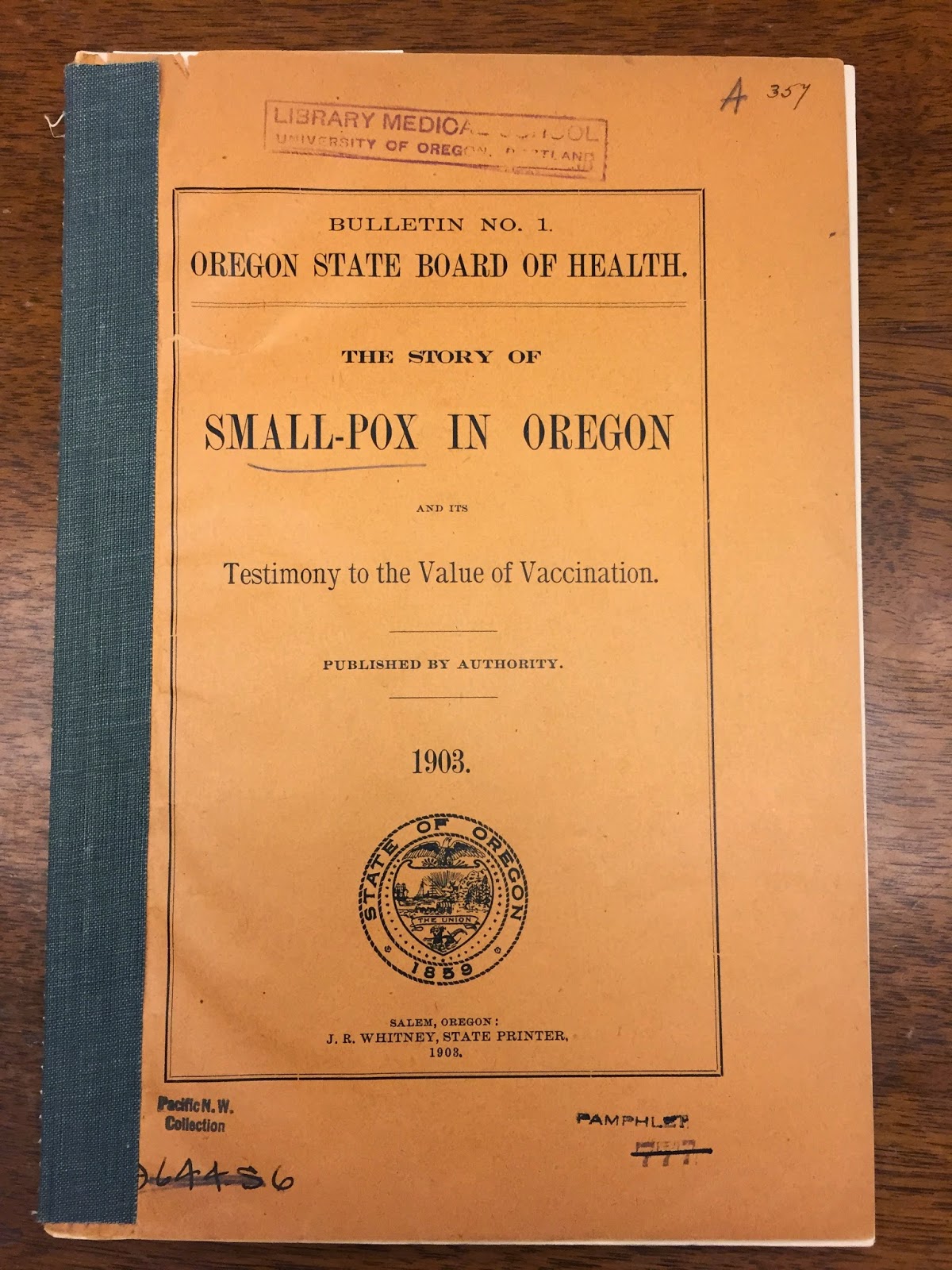 The bulletin focuses in particular on an outbreak that occurred in central Oregon, which the authors take pains to identify as "one vast sanitarium," owing to the "variety of diet, pure water, and magnificent air to be found there." Yet, ominously, "into this Eden comes the smallpox serpent, concealed in the body of a young Pennsylvanian farmer, bent upon that polite form of robbery of the Government which has made Oregon famous -- known as the 'timber claim.'" (If anyone thinks that historical public health bulletins make for dry reading, I invite you to investigate the dramatic flair of this report's authors!) Between Prineville and Shaniko, the young farmer was taken with chills and "some sort of an eruption," declared by the physician in the party to be the results of poison oak. This was, of course, an unfortunate misdiagnosis, and the young man died of smallpox several days later, after a local physician correctly identified the illness.

Local authorities moved quickly to report the incident to the State Board of Health and to vaccinate those who had made contact with the unfortunate young farmer. The bulletin goes on to follow the detail the three "crops" of resulting cases arising in Prineville and Shaniko, and reports with satisfaction that, "in a population of certainly not to exceed four thousand souls in the county, thirty two hundred were vaccinated within two weeks." The authors attribute the great success in containing the outbreak to successful vaccination: 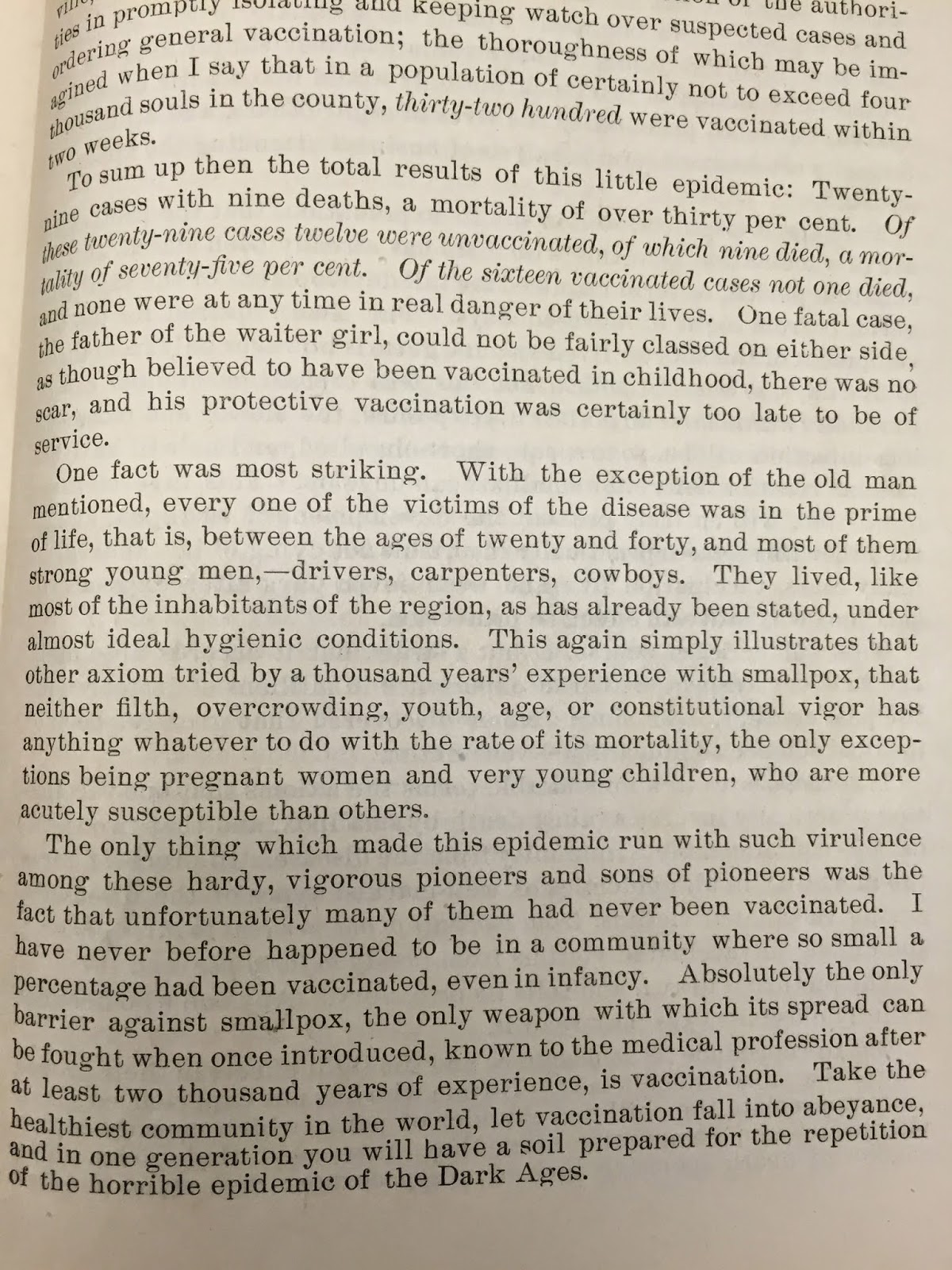 In the same vein, and, in my opinion, a slightly dramatic twist, on the next page they connect the Prineville and Shaniko outbreaks' origins to the young Pennsylvania farmer's resistance to getting vaccinated! 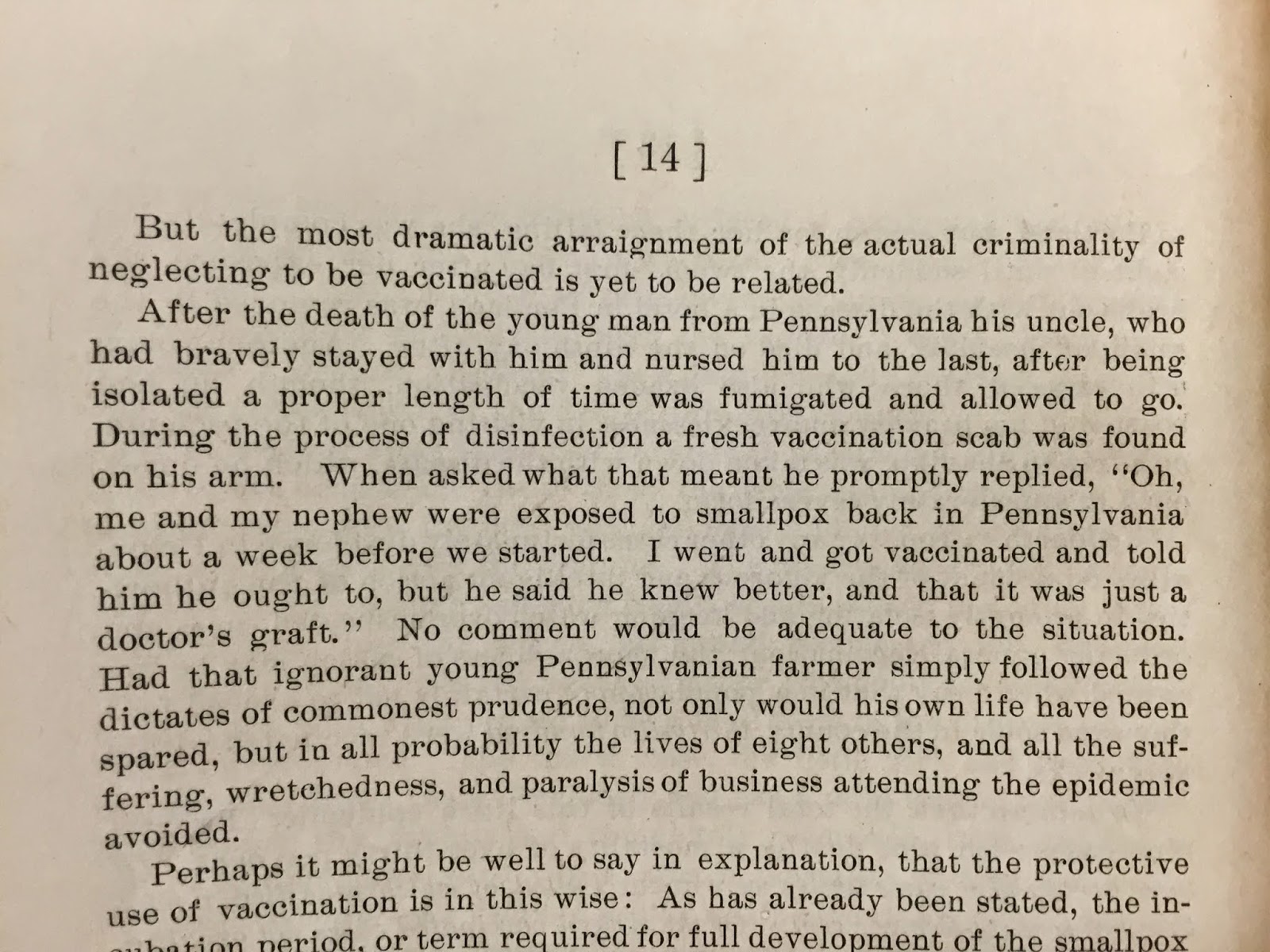 It's pretty interesting to note that two of the central issues that the Oregon State Board of Health was grappling with over a century ago, milk supply safety and vaccination against infectious diseases, are still pertinent today: A simple Google search on the history of milk pasteurization turns up numerous sites decrying pasteurized milk laws and exhorting the benefits of raw milk "as nature intended." Similarly, vaccine resistance and its effects have been put in the spotlight recently with high-profile outbreaks of diseases such as measles.

We have many, many more public health materials in our collections. The great news is that our LSTA grant project, Public Health in Oregon: Accessing Historical Data for Scientific Discovery (which Maija wrote about in October), will make these materials more useful and accessible for research! This project is just getting started, but everyone here at HC&A is quite excited about all of the possibilities it offers. Happy National Public Health Week to us, and to all!
Posted by Meg at 4:04 PM No comments:

"Narnian" journey in the Archives

While working with Crystal Rodgers, Student Assistant, on some flat storage of nursing uniforms I made a unique discovery.  We were removing the clothing rack of uniforms from the archives closet (Room 440A) when I noticed an electrical panel painted the same color as the wall.  Since archives work requires a dubious level of curiosity I decided to check out what controls this panel might hide.


I totally expected a series of breakers or some kind of ad hoc wiring scheme, instead this portal opened to another world, untouched by humans . . .

Crystal and I did some flashlight work to see if there was anything in the room, or whether it was your standard interstitial space.  The initial pass with the phone/flashlights proved intriguing, we could see various items, and to the archivist's delight, papers!!!!  Naturally, I had to don my safety gloves and explore.

Because this is one of the most bizarre things that we've uncovered, I told everyone I could.  Naturally, Meg Langford, Public Services Coordinator for HC&A, was the next to investigate what we had by this point dubbed "The Chamber." Here's a series of images Meg took:

All in all, the materials we found were of dubious archival value.  There were a number of blank forms for the US Army/Department of Defense from the 1940's, mainly Change of Dependency and Change of Address, all blank, but many covered in a soft blanket of choking dust.  We brought some of them back for further investigation.

Unfortunately, I did not find the trove of archival treasure I had hoped for.  We did however uncover a potential mystery that needs solving.  So, the whole find runs down like so, we found:

-A letter requesting a typewriter inventory from an Army Base to UOMS, Department of Military Science & Tactics.
-A burlap sack with a tag on it giving information on its destination.
-A massive amount of War Department forms, all blank.
-A pair of shoes, without laces.
-Old socks
-What could have been at one point underwear.
-A wooden doodad with a metal clip.

Here's the real info, and where I need your assistance, dear reader.  On the tag for the sack the following was written:

We also have a MEMORANDUM No. W700-11-42, dated December 26, 1942 and by Order of the Secretary of War J. A. Ulio, Major General, The Adjutant General, and by command of Major General Joyce issued by Chas C. Quigley, Colonel, A. G. D., Adjutant General.  This memorandum requests a survey of all typewriters.

So there's the info as retrieved from "The Chamber."  In addition, I spoke with several members of the library here at OHSU who recall tales told by former colleagues of people living in the Old Library "back in the day."

So, here's where I need your help.  Does anyone reading this have any information about the people mentioned here?  I plan to do some digging into the various names, requisition numbers and order numbers if those materials are still maintained by the National Archives and Records Administration.

Any information, ideas or theories?  Please contact Max Johnson, University Archivist and let's shed some light on this strange scenario!

Until next time, when I hope to bring you more information on new accessions and unique medical artifacts.
Cheers,
Max