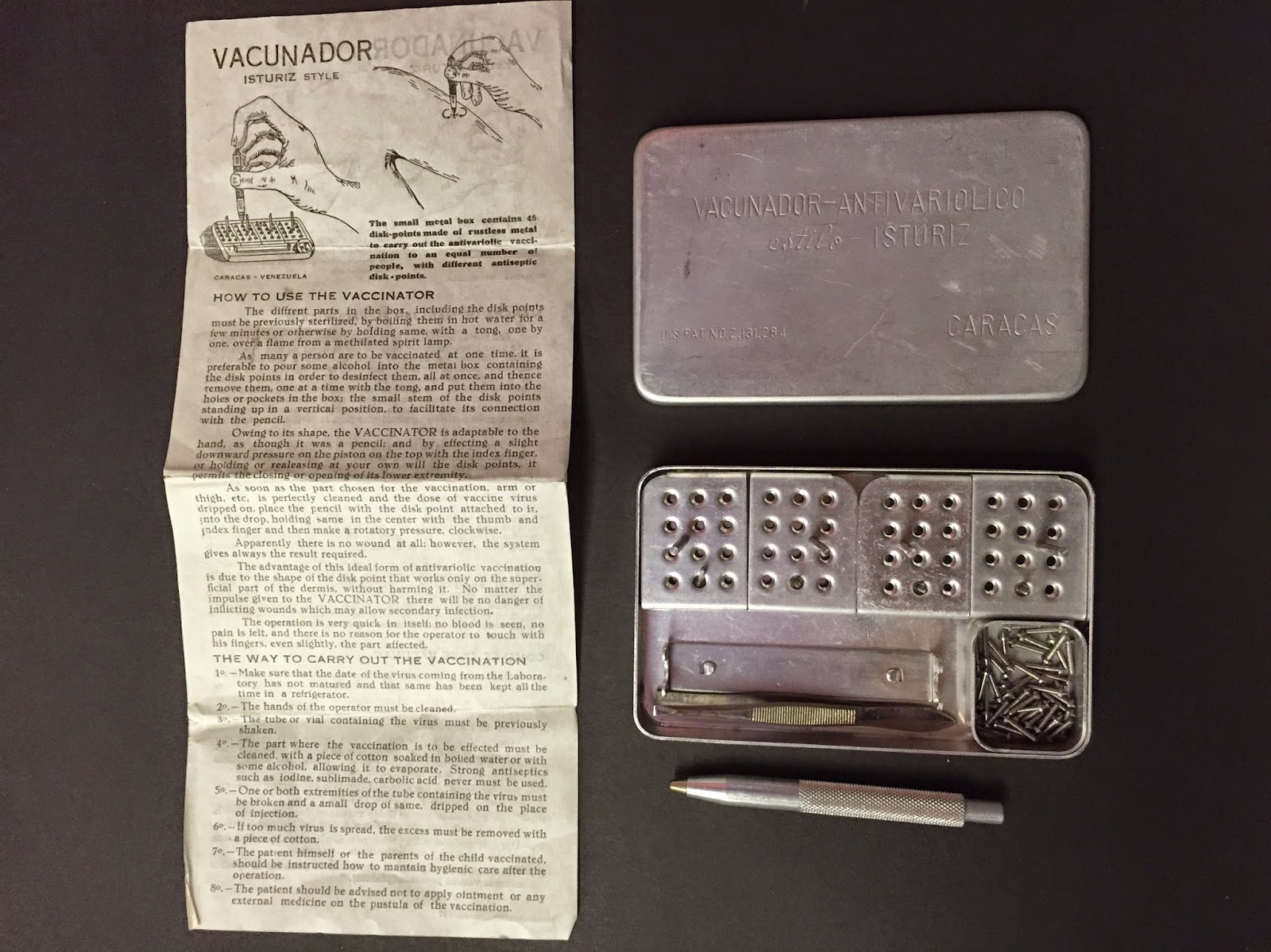 Today's artifact caught my eye while pulling items to display for a recent tour: It's a c. 1940s "Istúriz style" vaccinator kit, complete with vaccinator handle, tweezers, vaccinator tips and racks, as well as printed instructions in English and Spanish. The kit was designed to administer the smallpox vaccine in large populations.

The printed instructions emphasize the efficient, and relatively painless qualities of his vaccination process: "The operation is very quick in itself; no blood is seen, no pain is felt, and there is no reason for the operator to touch with his fingers, even slightly, the part affected."

Dr. Jesús María Istúriz was born in Venezuela, where he received his medical training at the Universidad Central de Venezuela in Caracas. In 1936 he was commissioned by the Ministry of Health to conduct a study of public health practices in the United States. He patented his vaccinator in the United States, Cuba, and Venezuela, where it was used for administering vaccines in both healthcare and agriculture.[1] Dr. Istúriz's 1937 U.S. patent application explains, "The object of the invention is to provide an improved technique and apparatus through which successive vaccinations against smallpox may be effected upon large numbers of persons, with great rapidity, without pain to the individual and with absolute safety against the infection of one person from another."[2]

According to the CDC, smallpox was eliminated in the United States in 1949, and the last naturally occurring case in the world was in Somalia in 1977. As a result, routine vaccination against smallpox was deemed no longer necessary.[3] Today, the United States currently maintains enough vaccine to vaccinate everyone in the country in the case of a smallpox emergency.

Thanks to vaccines, smallpox has been effectively eradicated from the world. But Dr. Istúriz's larger concern of providing efficient, safe vaccination of populations is still a matter of urgency for world public health officials: The World Health Organization's World Immunization Week 2015 is coming up on April 24-30, 2015, with the theme, "Close the immunization gap," a focus on providing equitable access to vaccines worldwide under the Global Vaccine Action Plan of 2012. Under GVAP, countries are aiming for vaccination coverage of ≥90% nationally and ≥80% in every district by 2020.[4]

In anticipation of the worthy objectives of World Immunization Week, in the coming month I'll be posting more materials related to the history of vaccines and the successful eradication of preventable diseases in Oregon and worldwide.

I was showing you, dear readers, our Scroll of Nursing Uniform Changes last week and wanted to bring to your attention some more materials which were donated alongside the scroll.

Above are the publications we received as part of the transfer which include a microfilm index, list of VD clinics, a history of Public Health in Oregon and a Multnomah County Department of Medical Services, Division of Public Health Annual Report from 1967-68.  All in great condition.  We also received a second copy of OPHA proceedings which I am excited to store next to our current copy.  I tend to keep at least two copies of publications that are somewhat more uncommon.
Included in the transfer was a packet of photos from an early 1960s State Board of Health Meeting.  The top photo includes Mike Gleason - County Commissioner, Julie Sheldon--Director of Nursing, County Health, and Dr. Hanson--also related to County Health.  The picture on the lower right contains the same individuals and the one on the lower left includes members of the Oregon State Lab and Dr. Adolph Weinzirl, who was faculty at the University of Oregon Medical School before becoming Chief of the Public Health Department.

We received two scrapbooks as part of the deal as well.  These scrapbooks mainly contain newspaper clippings related to public health initiatives and issues in Multnomah County.  While photographing this I noticed one of the articles, let's check it out in closer detail:
Dear readers, you know the faucet handles that are handle-like, long and narrow with an upturned end?  I had always figured that was simply to make grasping the handle easier.  Did you know that it was a public health measure?  According to this article, those handles, as opposed to the knob styled ones, were developed so that folks could turn the water on and off using their wrists or inner forearm.  And here I had thought they were because the knob ones could be hard to turn with wet hands!  You learn something new everyday.
Till next week when I have something "hot" to show you!
Best,
Max