Our next OHSU History of Medicine Society lecture is this coming Monday, November 17th! 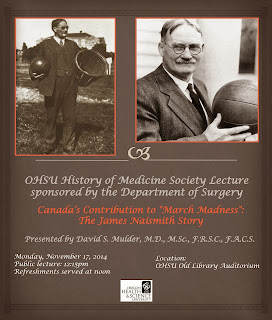 David S. Mulder, M.D., M.Sc., FRCSC, FACS was born in Eston, Saskatchewan, receiving his M.D. degree magna cum laude from the College of Medicine, University of Saskatchewan in 1962.  Following a year of rotating internship there, he received residency training in General Surgery at The Montreal General Hospital/McGill University in Montreal between 1963 and 1967.  During his residency, he spent a year in research and obtained a Master of Science Degree in Experimental Surgery from the Faculty of Graduate Studies and Research at McGill.  He then moved to the University of Iowa in Iowa City to complete two years of residency in Cardiovascular and Thoracic Surgery.  After another year in the Department of Physiology as a Research Associate at McGill University, he was appointed to the Faculty in 1970.  During his formative years as a surgeon, he was exposed to leaders in surgery as mentors that included Drs. H. Rocke Robertson, Fraser N. Gurd, and J.L. Ehrenhaft.

His talent and leadership qualities were recognized early and he became Surgeon-in-Chief at The Montreal General Hospital in 1977.  He was soon appointed Professor and Chairman in the Department of Surgery at McGill University in 1982.  Among the many other positions he holds, he is also the Medical Director of the McGill Sports Medicine Centre and Consulting Staff for the Montreal Canadiens Hockey Club and Alouette Football Club.

One of the significant contributions made by Dr. Mulder in health care delivery was the important role he played in the development of a trauma care system in Quebec as a member of the Trauma Committee of the Province of Quebec.  This system was based on regionalization of care, integrating four Level I trauma centers with more than ninety other trauma centers in Quebec.

The lecture will begin at 12:15 pm in the OHSU Old Library Auditorium. Light refreshments served at noon. Lectures are free and open to the public. For additional information or to request ADA accommodation, contact Maija Anderson, andermai@ohsu.edu, 503-418-2287
Posted by Maija at 11:52 AM No comments:

Our colleagues at Oregon Historical Quarterly are partnering with Professor Christin Hancock at University of Portland to organize a symposium that is likely to be of interest to many of our patrons and readers.

"Regulating Birth" will take place at Oregon Historical Society in fall 2015, but proposals are due this fall - November 30th, to be exact. They are looking for proposals for scholarly presentations that broadly address the regulation of birth. The goal of the symposium is


"to foster the production and public sharing of scholarship that explores themes and questions including, for example: how ideas of morality impact where, when, if, and how women give birth; how changes in scientific understanding (including genetics) affect the medicines, advice, and practices that attend pregnancy and childbirth; how professionalization of the medical field has affected the work, training, and regulation of midwifes and doulas; relationships between citizenship and birth; worker protective legislation (or lack thereof) and connections to women as child-bearers; relationships between religious beliefs and birth practices; impacts of pesticides, herbicides, and other industrial material on pregnancy, birth, and babies; and how experiences of stillbirth, miscarriage, and post-partum depression are regulated."

Scholarship presented at the symposium will form the basis of a special issue of Oregon Historical Quarterly. This promises to be a novel and engaging program that will bring scholarly attention to new areas of the history of health care in Oregon.
Posted by Maija at 1:01 PM No comments:

The past few weeks have seen some great acquisitions for HC&A and I'd like to share some details on one of them. 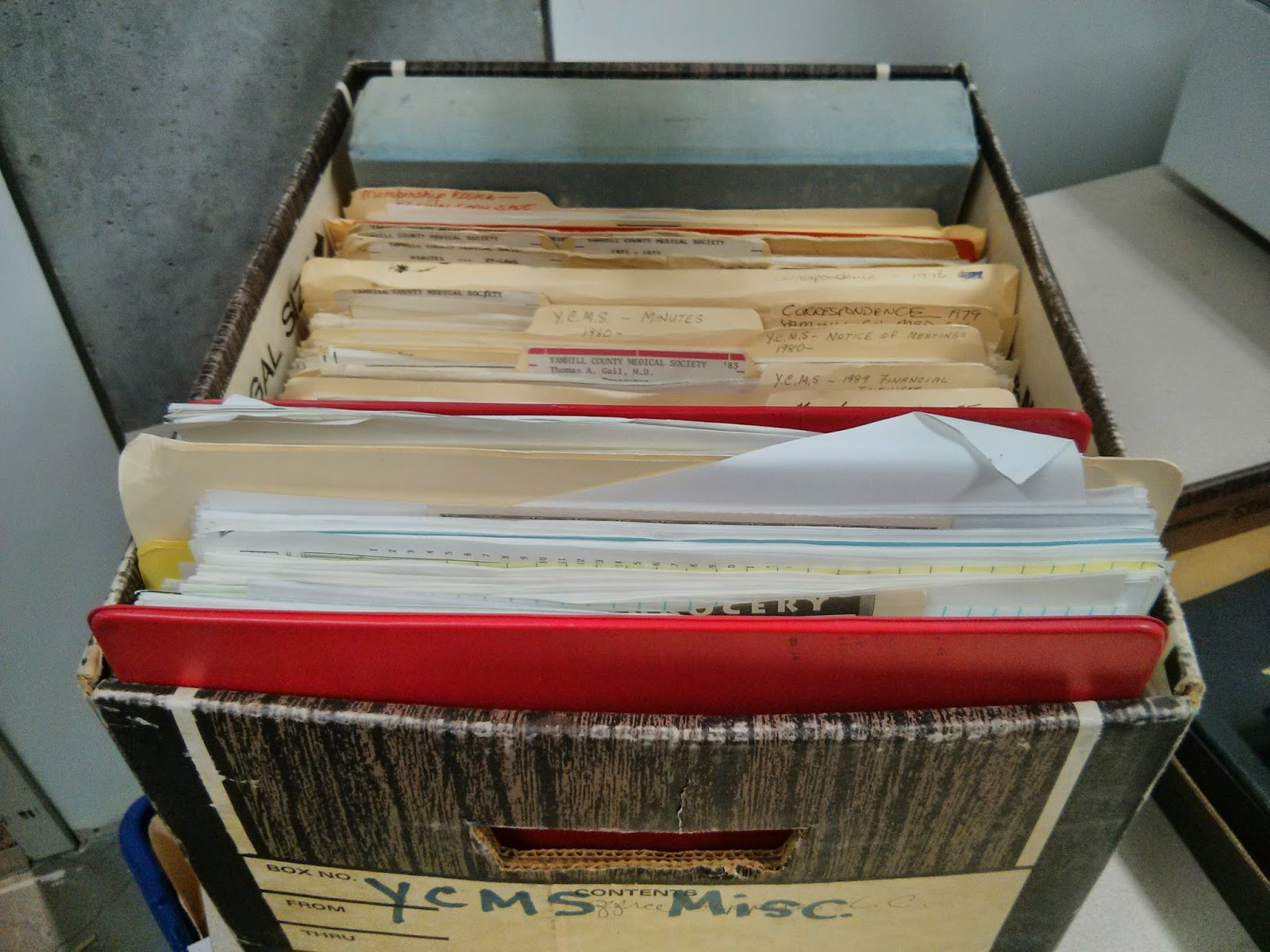 Pictured above is the box of records I received from George Barker, M.D. who served as the last secretary/treasurer of the Yamhill County Medical Society.  The records, which are currently unprocessed, cover the dates 1971 to 1998 and include meeting minutes, agenda items, correspondence and some materials related to published works by the membership.  The value in these records stem from their being evidence of how physicians collaborated and grew their professional standings as individuals and group practitioners.  If you are interested in medical societies in Oregon, please also check out our Edith Bolten MacCracken Collection on the History of the Physicians of Jackson County. 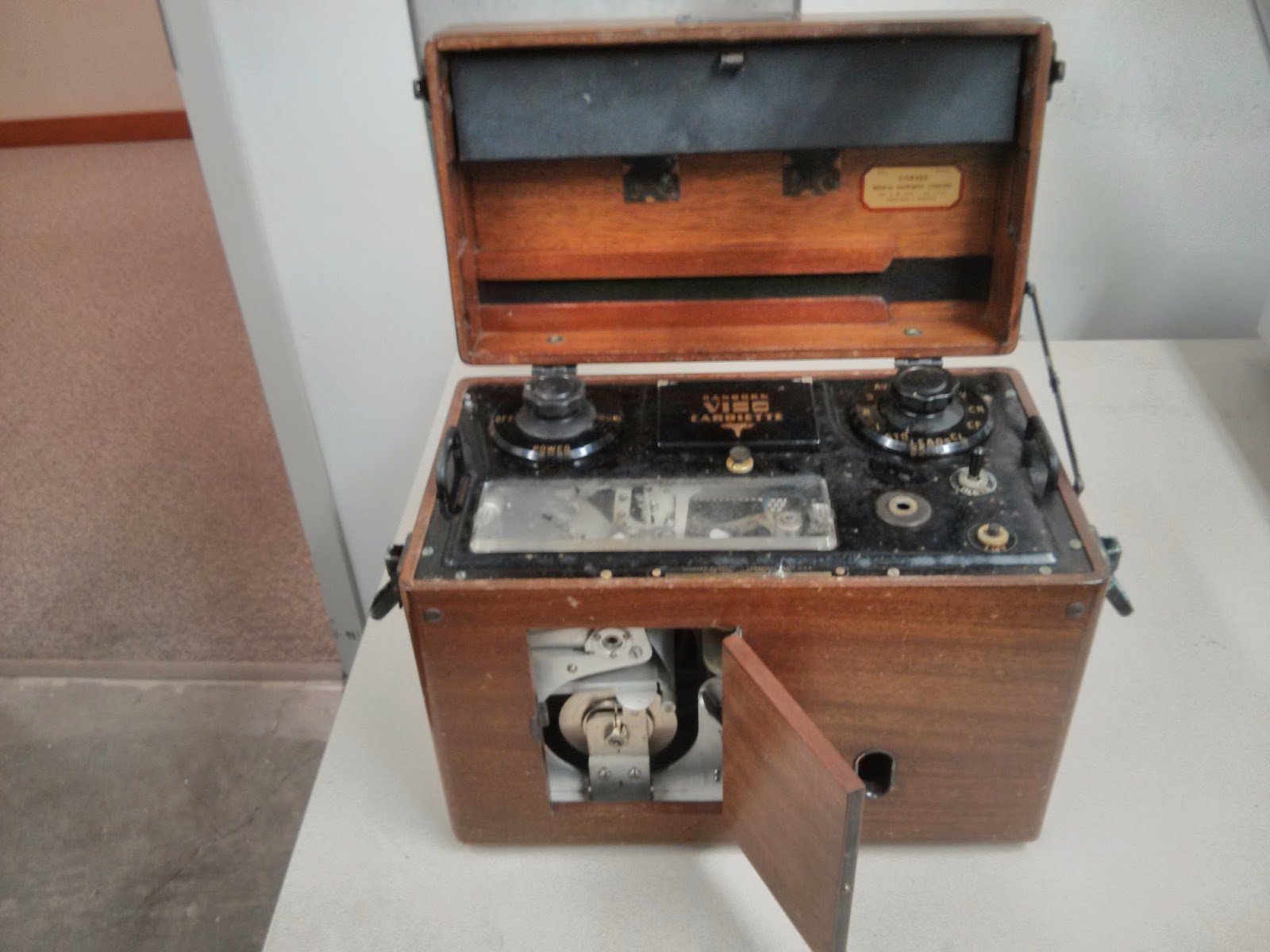 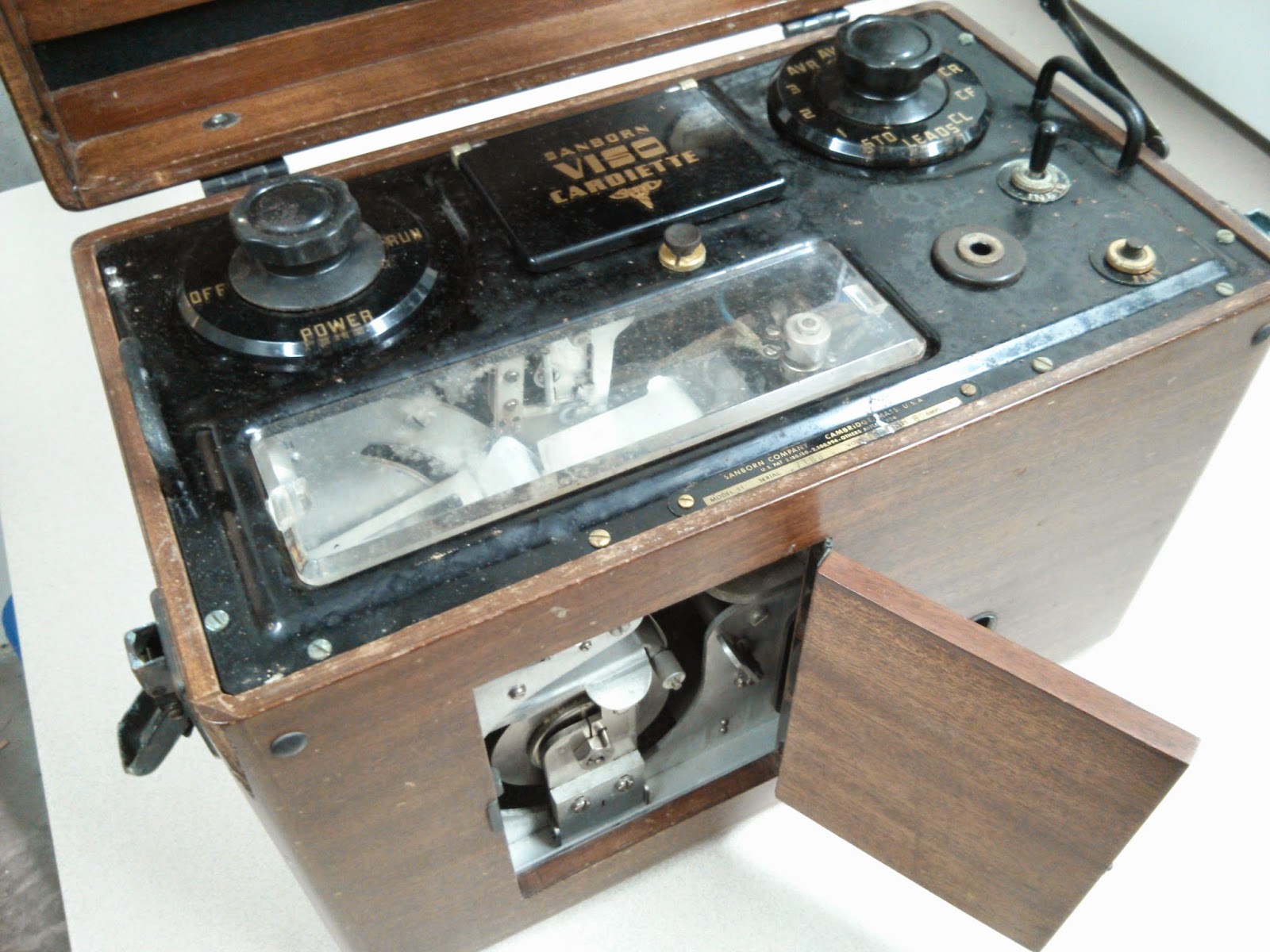 In addition to the records, HC&A also acquired the electrocardiogram machine that belonged to Henry D. Barker, the father of George Barker.  The machine comes in a standard wooden case with an overlaying canvas case which has zipper pockets for storing cords and other parts for the device.  The device comes complete with electrodes and wires and is loaded with graphing paper.  The device seems like it is a circa 1940's model and was used by Henry Barker in practice.

Lastly, HC&A is also home to the Henry D. Barker Papers, a 1-box collection of Barker's papers from when he was in the Army Medical Corp and materials related to the Physicians for Social Responsibility.

Until next time,
Max
Posted by Max at 1:33 PM No comments: