Monday! "Surgery 1881-1901 - Pistols, Presidents, and Pancreases: The Assassinations of Garfield and McKinley"

Our next OHSU History of Medicine Society lecture is this coming Monday! 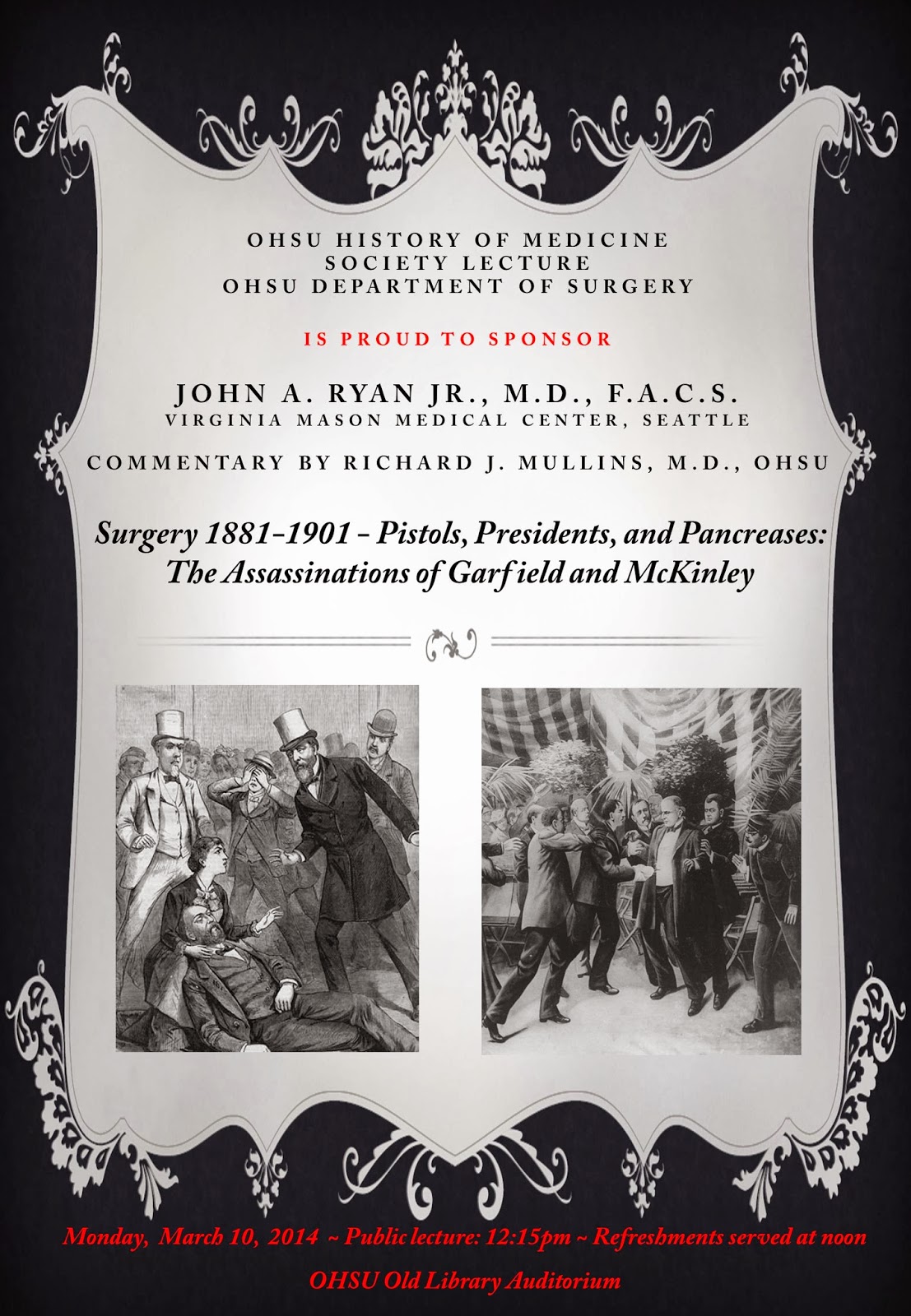 John A. Ryan, Jr., M.D. is a general, thoracic, and vascular surgeon at Virginia Mason Medical Center in Seattle, Washington. From 1991-2001, he served as Chief of the Department of Surgery at Virginia Mason. He directs the hospital’s General Surgical Residency Program, and serves as Clinical Professor of Surgery at University of Washington. Dr. Ryan earned an M.D. cum laude from University of Michigan Medical School in 1969, and completed his internship and residency at Massachusetts General Hospital. He is a Fellow of the American College of Surgeons, and a member of the Society of Parenteral and Enteral Nutrition, the Association for Academic Surgery, and numerous other professional organizations. He has published widely on surgical techniques and parenteral nutrition.
The lecture is free and open to the public. If you have a disability and need an accommodation to attend or participate in this event please contact Maija Anderson (503-418-2287) at least five business days prior to the event.
Posted by Maija at 8:22 AM No comments:

Laurel Narizny volunteered in HC&A for several months until she got a fabulous new job as a cataloger at Caltech. Before she departed, she wrote some blog posts to share with our readers:

A surprising variety of medical poetry, from humorous to heartfelt, can be found in OHSU’s Pacific Northwest Collection, demonstrating that the arts definitely have a place in the field of medicine.

“Quacks and Doctors,” an address delivered at the meeting of the state medical society by R. Glisan, M.D., the retiring president, pokes fun at the rivalry between doctors and those practitioners of medicine who are, shall we say, not so authoritative.

I shall, my friends, your kind indulgence ask
Whilst I in humble rhyme attempt to task
On subjects grave a little while to sing,
And hope ‘twill not on me your censure bring.
…
Thank God, we can for our Society claim
No ignominious, but a noble aim.
…
Protective tariffs, no! nor patient rights
We seek; protection only from those blights
The quacks, who, locust-like, infest the land
By thousands. They upon street corners stand,
With smooth and oily tongues, or blatant cries,
Retail their salves, their poisons, and their lies.
“Esprit de Corps,” by Nome Mann, is more decorous in describing the goals of the publication in which it is printed. Mann, the Portland Clinic’s record librarian in 1967, wrote in the Portland Clinic Stethoscope, vol. 1, no. 1:

Stethoscope, our Clinic publication,
was created like its counterpart
to hear the beat and rhythm of our hearts.

We’re united in the common bond
‘though divided by our separate skills
to aid in the healing of the ill.

Through the patients’ eyes we see
some jobs are big and some are small
centered ‘round the doctors; ten feet tall.

Pick up Stethoscope and be assured
each familiar-strangers’ heart beats for
the unconquerable esprit de corps.

Sanscript Magazine’s April 1941 issue, published by the patients of the Eastern Oregon Tuberculosis Hospital, contains a rhyming response to Ogden Nash, an American poet famous for his light-hearted works:

“Editor’s Note: Oh Nertz, this hurts to tell it. Well, it is Lois who pulls the Woolsey over our eyes. In fact, it’s a total Lois!

“It happened this way: Ogden Nash wrote a poem called “The Sniffle” which concerns Isabel, a gal who remains cheerful despite her cold in the head. Lois Woolsey, also with cold in the head, composed the following rebuke:”

Lois isn’t chiffle
When she has a sniffle.
She just feels mad
With a cold in her had. . .
Her nose gets all stuffy
Which makes her eyes puffy.
Her eyes may be bluier
But also they’re dewier.
She can’t see the fun
Of a nose on the run.
So “Isabel’s disposition’s sunny”
Sounds to Lois very funny.
In fact, dear Isabel seems
Like one of Nash’s dreams.
For the fact
That Isabel’s civle
When she has a snivle
I’m afraid
Is just pure drivle.
Therefore,
While I’m about it
I doubt it!

Found in The Datter, the gossip magazine of the Associated Students of North Pacific College of Oregon, in the March 1928 issue: 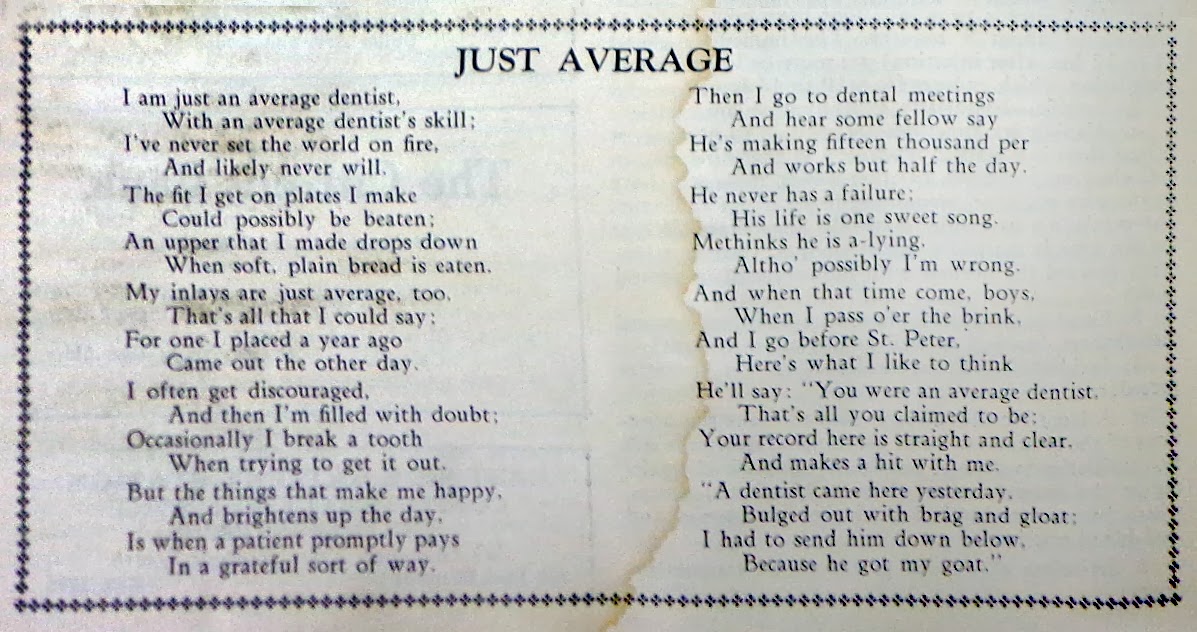 -- Laurel Narizny, HC&A Volunteer
Posted by Historical Collections and Archives Staff at 8:31 AM No comments: