Our latest additions to the Digital Resources Library include some great views of Mackenzie Hall through the ages. 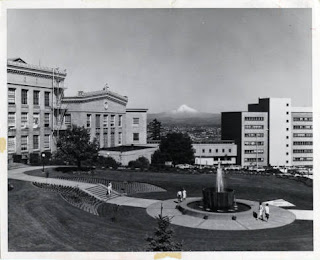 Mac Hall, Baird Hall, and the UOMS Hospital with the Alumni Fountain in the foreground, and Mt. Hood in the background, 1968 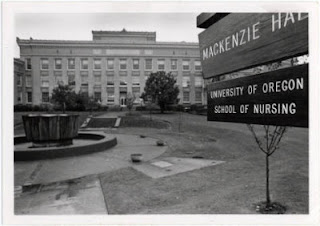 Mac Hall and the Alumni Fountain with signage in the foreground, circa 1960s 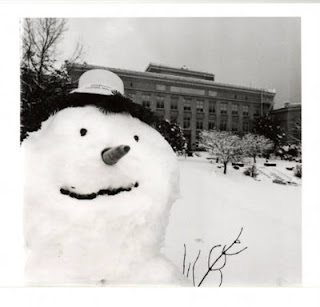 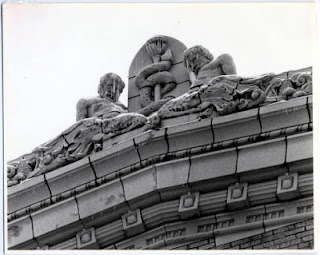 Mac Hall cornice sculptures with icicles, 1980
Posted by Maija at 1:57 PM No comments:

In November and December 2012, Richard and Betty Lyons of Des Moines, WA donated a selection of leaves from the1934 edition of Andreas Vesalius's De humani corporis fabrica. This edition of Vesalius is noted as the last to be printed from the original sixteenth-century blocks. One of the copies came to Robert L. Bacon, Ph.D, a UOMS professor of anatomy who is fondly remembered as a teacher and mentor.  Dr. Bacon passed along his copy to Richard Lyons, an alumnus of University of Oregon Medical School who shared his interest in books and medical history.

Dr. Lyons wrote a narrative of the book's history, which I've excerpted below. The story behind the donation attests to the dedication of collectors in preserving objects of historic and personal value.


In the final year of his life, Bob Bacon was sorting through many of his favorite belongings – especially his books – and during one of our visits to Gearhart, he decided to give us a number of whale and other marine biology books as well as some of his very valuable anatomy books.  He had once received a copy of [Vesalius] printed in 1934 from one of his former surgery colleagues as a special gift in recognition of some research they had done together many years before.  The marvelous book, bound in white calf skin, was printed [by[ the Bremer Presse in Bremen, Germany in a limited edition of 615 copies, with the fabulous illustrations being printed onto beautiful handmade paper using a hand operated letterpress from the actual pearwood blocks that were hand carved in the mid-1500’s.  Bob always kept the book in the living room and anytime it was mentioned, he would jump up, take the huge volume into his hands and page through it lovingly with anyone who seemed at all interested – all of us would marvel at the beauty, size (an "elephant folio"), craftsmanship, printing, and binding of the volume to say nothing of its fascinating history and significance to the study of human anatomy.

Tragically, those wonderful ancient blocks that had survived four centuries were subsequently burned up forever during the bombing of the Munich Library during World War II (stated by some to have occurred in 1943, which was a very intensive bombing year in Munich).  Therefore, the 1934 edition was the last time the original blocks would ever be used again.  It is similarly ironic that the wonderful copy of the 1934 edition of 615 copies given to us by our dear anatomy professor, was tragically smoke damaged during our own Des Moines, WA house fire on July 18, 2008 while we were on a trip to Corvallis, OR.  Miraculously, we discovered several days later that, though the covers had been burned completely off, many of the inside plates had only received minor smoke and water damage and might be partially restorable

After our fire, I was sadly cutting out those beautiful thick handmade pages from a dripping mess of rubble with a utility knife on the tail gate of our old blue truck at the [neighbors home] and strewing them out all over their lawn after it stopped raining; the huge lawn was almost covered by the hundreds of pages.  Suddenly, while admiring one of the large illustrations, I realized that the very ink from the plates had been placed there directly onto my page as it passed off from the original woodblock actually created about 465 years ago and we were only separated by those years and a few molecular layers of black ink that I gently ran my fingers across!

There I was, sifting about through the pages of that partially burned book trying to get those marvelous and very precious plates sorted out, restored by an expert, and ready for their next resting place.


They gave a few of the leaves to close friends, but most remained in their collection. In 2011, the Lyons' decided to donate their items to OHSU, wishing to see them preserved and used by others. The plates are now held in Historical Collections & Archives, where they join our 1555 and 1934 editions of Vesalius. The Lyons donation consists of 120 leaves of plates and text, including most of the famous anatomical illustrations. A selection of the plates will be displayed following restoration by a conservator. We are so pleased that the Lyons' chose HC&A as the new home for these items, where they will be preserved for a long future.
Posted by Maija at 10:09 AM No comments: