New exhibit: Take a Byte out of Time

Our new exhibit, Take a Byte out of Time, was curated by our departmental assistant, Max Johnson. Max is a student in San Jose State University's Master of Library and Information Science (MLIS) program. He brought together examples from over 100 years of archival collections to highlight the challenges of preserving research data. 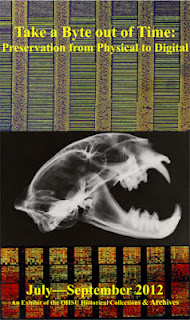 The exhibit is on view from July-September 2012, and is open to the public. It is located on the OHSU campus, BICC building 3rd floor, Main Library lobby.
Posted by Maija at 9:55 AM No comments:

Thanks to the generosity of Donald Blanchard, M.D., Historical Collections & Archives now holds a complete set of the 11-part series The History of Ophthalmology, published in 18 volumes by Wayenborgh beginning in 1982.

The core of this series is Frederick C. Blodi's English translation of Julius Hirschberg's monumental Geschichte der Augenheilkunde, first published in German between 1899-1918. The series also includes translations of Robert F. Heitz's research on the history of contact lenses. Dr. Blanchard contributed to the translation of volume11-3D in the series, Ophthalmology in the German Speaking Countries in the 20th Century. 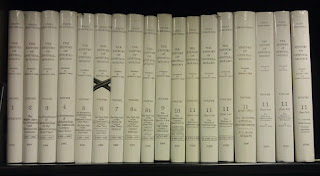 Last May, Dr. Blanchard donated a set of the supplemental series, History of Opthalmology - The Monographs. Through Dr. Blanchard's donations, HC&A is now able to offer access to complete sets of these resources in one location.