Historical Collections & Archives is participating in a new oral history project that will collect first-hand accounts of the development of the Starr-Edwards heart valve. We recently received DVDs of the first two interviews in this project: 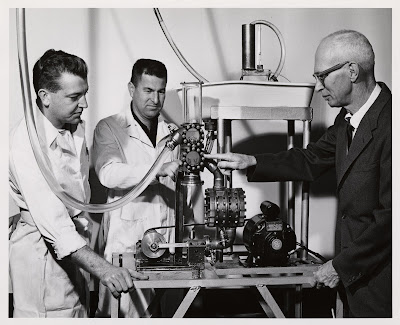 Arne Solberg (pictured above left, with Richard Farnsworth and M. Lowell Edwards), worked as a machinist for Edwards. Mr. Solberg discusses in detail the innovative technical processes that led to the success of the Starr-Edwards valve.

Jeri Dobbs is a perfusionist who began working for Dr. Albert Starr in 1966. In his interview, he shares vivid memories of working on Starr's research team.

Both subjects were interviewed by Rich Mullins, MD. I'm looking forward to working with Dr. Mullins and producer Matt Simek to add more interviews to this project. Historical Collections & Archives will preserve DVDs and transcripts of interviews, as well as administrative records of the project.

An interview with Dr. Albert Starr is also available as part of the OHSU Oral History Program. The recording and transcript can be checked out from the Main Library.
Posted by Maija at 12:46 PM No comments:

We heard last week that OHSU's own John Hunter, MD was made an honorary fellow of the Royal College of Surgeons of Edinburgh. 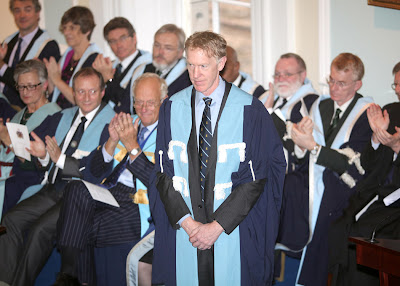 Dr. Hunter is Professor and Chair of the Department of Surgery, and is also an active member of the OHSU History of Medicine Society, which supports the lecture series managed by HC&A. As an honorary fellow of the college, Dr. Hunter joins an international group of over 17,000 Fellows and Members.

Tracing its roots to 1505, the Royal College of Surgeons of Edinburgh is one of the oldest surgical societies in the world. Since that time, it has been dedicated to maintaining and promoting the highest standards of surgical practice. The college is also committed to preserving its long history through the Surgeons' Hall Museums, which itself is historic - founded in 1832, it is Scotland's oldest museum.

HC&A joins the rest of the university in congratulating Dr. Hunter on this honor!
Posted by Maija at 10:35 AM 1 comment: