The unveiling of the Diversity Story Wall was a long anticipated event. It was back in 2008 when Sara Piasecki, former head of Historical Collections & Archives, was contacted by the Oregon Health & Science University Diversity Advisory Council asking what kind of records we might have on diversity at OHSU.

We have a plethora of historical materials about the University, its faculty and students and physicians in our region, but how to tease "diversity" from the records was a monumental task and we knew it would be. "It [is] often difficult to identify diverse pioneers, particularly before 1970 when educational institutions did not routinely maintain diversity demographics."

Back in 2008, DAC's Special Projects Coordinator, Alyson Evans, was first to be tasked to research the history of diversity at OHSU. Fortunately, she contacted us. Sara Piasecki, former head of OHSU Historical Collections & Archives, sent off transcripts of oral histories and a list of possible clues in the archival record, including the photograph and biography inventories.

Scroll forward to 2010. DAC formed a committee with more than a written history in mind, they wanted to tell the story on a wall that would be strategically placed, where all visitors to OHSU would pass and learn about the struggles, set-backs and successes on the path to a diverse medical community.

The committee was charged with hiring a contract historian to do the research: enter Morgen Young, LLC; to hire a photographer to create and feature two individuals who won the fight against prejudice in their own professional lives: enter Elijah Hassan; and to hire a design team to create the wall: enter Rapid Design Concepts; and lastly but most importantly, to engage the community in telling their stories.

I worked directly with Morgen, providing everything I could find in our collections that might lead to new avenues of research. Morgen spent months pouring over our materials and went out into the community of area archives and, as well, delved into local newspapers looking for anything that would fill in the history. She wrote narratives that went to the committee for approval and then on to the design team.

For the portraits, the committee chose to feature, tram namesake, Jean Richardson, BSCE, first woman to graduate from Oregon State University with a degree in Civil Engineering (1949), and Clarence Pruitt, DMD, first African American to graduate from the University of Oregon Dental School (1949). Both individuals worked throughout their careers to encourage young people, whatever their ethnic background, sexual orientation or gender, to persue their dreams.

Wednesday was a proud day for me. I happily served on the committee as the consulting Archivist. The committee members were engaged and dedicated to the project; I offered my opinions on the design and on the portraits and on the people featured on the wall. I thoroughly enjoyed working with Morgen, a skilled and capable historian. As I stood next to Morgen and listened to Norwood Knight-Richardson, OHSU CAO and Chief Diversity Officer, Joe Robertson, OHSU President, Leslie Garcia, Vice Provost for DAC and Charles Wilhoite, Chairman, OHSU Board of Directors, give their speeches, I swelled with pride. I had the opportunity to greet honorees that I knew and meet, for the first time, many of the luminaries that day. Honorees, Fran Storrs, Gus Tanaka and family, Barbara Glidwell, Andre (son) and Jill (wife) of Clarence Pruitt, Avril Gordley and Larry Betts, just to name a few. I had been part of seeing this come to fruition.

Members of the Library were there to support our work, and as you can see from the video, we had a large audience attending to view the unveiling. Because the wall is placed in the corridor directly exiting or entering the tram station, visitors were streaming through during the entire presentation, confirming what we knew: this would be a great place for the wall. 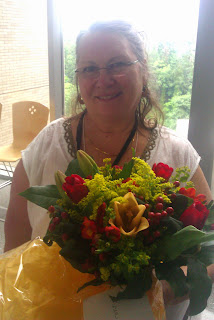 I was given a lovely bouquet of flowers and had my photo taken with the committe, the speakers and the design team. I was elated! But I knew that I did not deserve all of the praise. It took the team here in HC&A. Our assistants, Max Johnson and Jeff Colby paged and reshelved piles of materials, Max scanned mountains of documents and photographs, Maija Anderson, new head of HC&A, was here to give her support where ever it was needed, responding to emails and helping to set appointments and covering reading room supervision. And last but not least, I have to mention Sara. Her initial contact and work with DAC set the ball in motion.


I recieved the flowers and the accolades for a job well done, but I received these for our team, knowing that I could not have done this without each and everyone of them. Thanks guys, for everything.
Posted by Karen Peterson at 9:42 AM No comments: Links to this post

Yesterday's blog post was about highlights of the RBMS preconference, focusing on serious stuff like emergency management and innovative researcher services. Here are some photos of the not-so-serious stuff:

Below: LSU's Mike the Tiger naps in his luxurious new habitat near the football stadium: 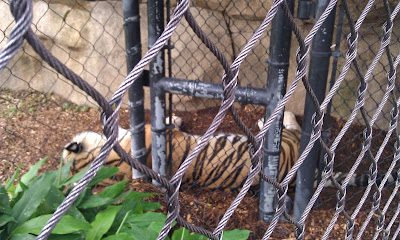 Below: The original Mike the Tiger (and friend) at the LSU Museum of Natural Science, where we got an amazing behind-the-scenes tour of one of the world's premiere collections of bird specimens. 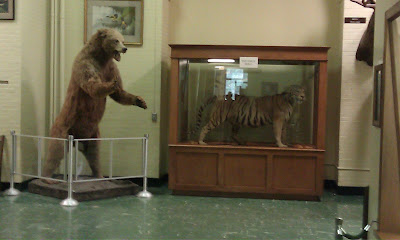 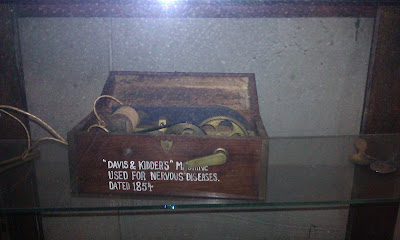 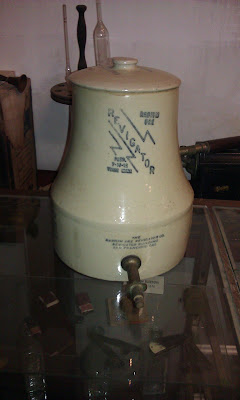 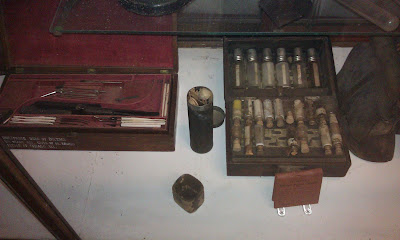 Just returned from Baton Rouge, Louisiana, where the annual preconference of the Rare Books and Manuscripts Section (RBMS) of the Association of College and Research Libraries took place last week. The meeting exceeded all my expectations for lively discussion, inspiring presentations, fun tours, and great food.

Unfortunately, I missed all of Tuesday's programming due to flight delays. No browsing the Booksellers' Showcase, sadly.

My favorite session on Wednesday was "Yes, We Scan: Innovative Approaches to User-Initiated Digitization." Speakers, including my former University of Chicago co-workers Julia Gardner and Anne Bahde, presented "innovative experiments with scanning and delivering digital copies of special collections materials at the request of users." It was fascinating to see that each presenter's department had developed a completely unique approach to "scan-on-demand" services, depending on their library's resources and patrons' needs. By the way, we here in HC&A have long experience with scan-on-demand services - always good to find out something you've been doing for ages is the cutting edge!

In terms of presentation, the most innovative session I attended was Thursday's pecha kucha on instruction and outreach with special collections materials. The presenters did an outstanding job with this format, using plenty of humor and inventive visuals.

Friday's final plenary was on emergency management and disaster recovery, drawing on the experiences of archivists involved in post-Katrina recovery. Their stories and slides were sad and shocking, but it was amazing to see how much of their collections they were able to save through preparedness, communication with outside agencies, and a ton of on-the-fly creativity.

Another RBMS update - including photos - is coming later this week!
Posted by Maija at 11:58 AM No comments: Links to this post