Raymond Hack, MD: An example to us all

Ray Hack earned his way through medical school making newspaper deliveries in a car that cost him $4.50 a week to drive. As a junior at the University of Oregon Medical School, the expenses of driving, tire shortages and gas rationing, Ray began to worry about how he could continue to pay for school. But Ray was not to be deterred. He wanted to become a doctor, and he wanted it bad.
In 1942, times were tough for a med student without a way to meet expenses. Ingenuity was Ray's only option. Determined to be a doctor, Ray built himself a tiny gasoline motor and mounted it on a bicycle and reduced his expenses to 2 cents a day.

Ray searched through second hand stores to find a small front tire that would make room for the motor below the handlebars. The throttle with a flexible cable to the carburetor was operated with his right hand. He used a kick starter to get the thing going and to stop? He slammed on his coaster brake with his right leg and drug his left foot on the ground.

To help his little motor, Ray pedaled up the steepest hills but came down like lightning. "Only thing that bothers me" he said, " is the dogs. They hear my little motor putting along and take after me in a flash."

Ray made it through school, graduating in December of 1943. It seems that he was not heard from again until an announcement came out in the Oregonian from the Brooke Army Medical Center at Ft. Houston, Texas, that Lt. Col. Raymond L. Hack had been made a diplomat of the American Board of Neurology and Psychiatry and was assigned to duties in Europe. After an internship at Seattle-King County Hospital, he served at Brooke and later at Fitzsimmons Army Hospital. He returned to Brooke in 1948 to become chief of the open psyschiatric section and co-chief of the closed neuropsychiatric section.

And what'd you say about "I can't?" Let's just be a little more ingenious, why don't we.
Posted by Karen Peterson at 2:50 PM No comments: 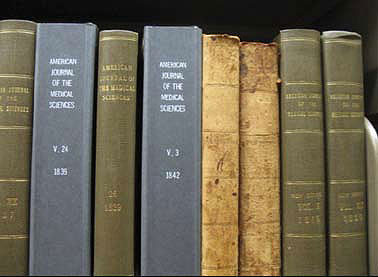 A search for articles by Fuller Albright reminded me that I've wanted to highlight an OHSU Library special collection that is not part of HC&A: The Classic Articles Collection consists of over 1500 individual journal volumes, containing over 2000 of the articles identified in Lee Ash's Serial Publications Containing Medical Classics and Morton's Medical Bibliography. While the library's main print collections have been aggressively weeded over the years, this special collection helps ensure that historically significant medical articles will be preserved permanently. Patrons can request the volumes online through our catalog and use them in the library.

The collection was built mainly through the efforts of Judith Norton and her staff in Access Services. Judith's 2010 OLA Quarterly article "Saving the Best to Last: OHSU's Classic Medical Article Collection" is an in-depth discussion of the collection's development. Library student assistant Turner Masland also presented a poster session on this collection at the 2011 Oregon Library Association meeting.
Posted by Maija at 1:39 PM No comments: 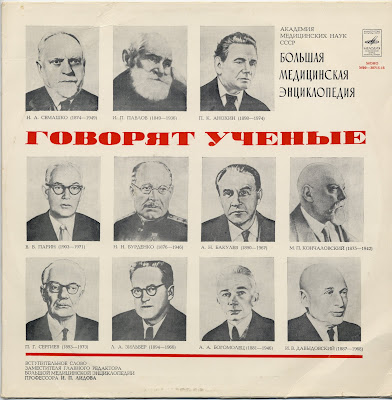 To continue with the Soviet Doctor LPs, I am posting about another of the three LPs we have, this one titled:

The series is the same as the previous LP. This record is part of the “Great Medical Encyclopedia” produced by the Academy of Medical Science, United Soviet Socialist Republics and features snippets of lectures given by (top to bottom, left to right):

To give an idea of who these speakers are, here are some quick points of interest:

N.A. Semashko was People’s Commissar of Public Health in 1918 and served in that role until 1930, effectively one of the organizers of the health care system in Soviet Russia.

I.P. Pavlov was a famous physiologist and Nobel laureate (1904).

P.K. Anokhin was biologist and physiologist known for pioneering concepts of feedback (published in 1935) in cybernetics and functional systems.

V.V. Parin was also a well-known researcher in medical cybernetics.

That’s all for this week. If you are interested in any of the other speakers that I didn’t provide details on, please let me know! 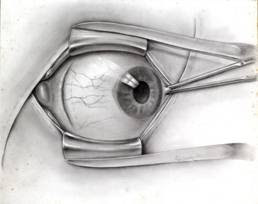 Above: Image from the Kenneth C. Swan Papers

May and June have turned out to be big months for ophthalmalogy-related research and collection development in HC&A. I already mentioned the donation of books from the History of Ophthalmology - The Monographs series. Last month, we also began receiving donations of papers of Earl Palmer, M.D., a leading researcher in the retinopathy of prematurity (ROP). Karen is working with Casey Eye Institute staff to transfer additional materials to the archives, just as her assistant Jeff is completing processing of the papers of Kenneth C. Swan, M.D.

The 20th anniversary of the Casey Eye Institute building is also coming up, and I've been delighted to help round up photos and factoids to mark the occasion. Materials in HC&A related to CEI include photographs, publications, faculty papers, and administrative records. A short history of the institute is available on the CEI Website.
Posted by Maija at 2:59 PM No comments: