Why not? What was wrong with Dr. Clarence O. Pruitt? He had graduated from the University of Oregon Dental School in 1954; he had served in the U. S. Air Force for two years as a dental officer; and when he was done serving his country, he was appointed as instructor in the dental school's crown and bridge department. Wasn't that enough? Then what was wrong?
Dr. Pruitt and fellow staff member of the dental school, Dr. Larry Lundeen (by the way, Dr. Lundeen was white) proposed to open a shared office in the building. When Dr. Pruitt made application, building manager, Gerard Macnamara, rejected his proposal on the grounds that it was building policy not to rent to a "negro". Yep. That's what he said.
The building had been built by a group of physicians and dentists who held, along with family, all of stock in the building and they had made this a policy. A black man had never asked to occupy a space in the building before, said Macnamara, and this was the first time that he had turned down an application on the basis of race.
The Portland District Dental Society heard about the incident and passed a resolution that condemned the owners of any building that refused space to any member of society based on race or religion.
The Urban League reported that Dr. Lundeen, who was anxious to get his practice started, opened his practice with another dentist.
Dr. Pruitt practiced in Portland for many years and was always a champion of diversity.
Posted by Karen Peterson at 3:20 PM 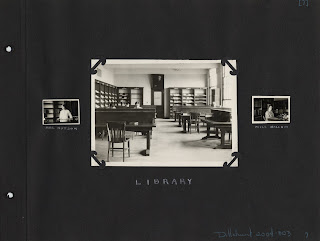 This image was scanned from the Richard B. Dillehunt Photograph Album, held in OHSU Historical Collections & Archives, Accession No. 2004-001, page 7. The photo album in general contains a wide variety of scenes from the history of OHSU during the time of Richard Dillehunt. The first page contains the text:

“Presented to Dean Richard B. Dillehunt with Love and Best Wishes for a speedy recovery – From – The Faculty and Employees of the Medical School – July 13, 1927”

Page 7 contains 3 photographs; the central one is of the Reference and Periodicals room at the library located in Mackenzie Hall. Flanking the central photograph are smaller images, one of “Miss Hallam” and one of “Mrs Notson.” 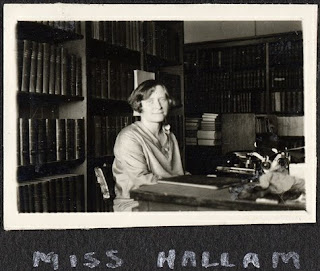 Bertha Hallam was the first Library Director from 1919 – 1965, and if you are interested there is an excellent painted portrait of Bertha hanging in the History of Medicine Room in the Old Library Building. 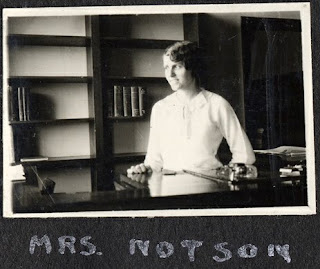 No details regarding Mrs Notson were found.

Dr. Richard B. Dillehunt was the third dean of the Medical School and Chief Surgeon of the Shriner’s Hospital for Crippled Children for 19 years

The past two weeks have brought some important new archival material to HC&A:

From the OHSU School of Dentistry, we've received much-needed issues of the Caementum newsletter, an invaluable source of information about the school. Many thanks to Sydney Clevenger, SOD communications guru, for making this transfer happen!

Another dentistry-related acquisition is the papers of Robert L. Anderson, D.M.D. Dr. Anderson was an alumnus of the dental school and practiced in Portland. He had a passion for art and culture, and was an artist himself: The collection includes his original artwork for illustrations in Merrill Swenson and Louis Terkla's Partial Dentures.

And just this week we recieved an initial donation of papers from Earl L. Palmer, M.D. Dr. Palmer is a leading researcher in retinopathy of prematurity (ROP). He is contributing correspondence, slides, and publications from national research projects in this field.
Posted by Maija at 10:44 AM

A hearty congratulations from all of us in HC&A to School of Dentistry student Kyle Malloy, who placed second/honorable mention for this year's Bremner Award for Pre-Doctoral Dental Students! Given by the American Academy of this History of Dentistry since 1958, the Bremner Award recognizes outstanding original pre-doctoral research on the history of dentistry.

Kyle's paper, "Conradus Victor Schneider and Nathaniel Highmore: Addressing the Confusion Surrounding the Maxillary Sinus Membrane," deals with two important figures in the history of otolaryngology in the seventeenth century.
Posted by Maija at 8:27 AM