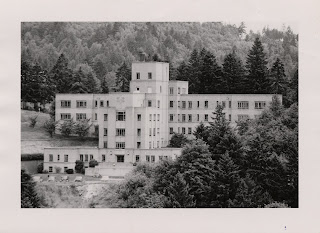 I found this while looking through the Historical Image Collection. The HIC holds a series of images of Places, and for this week I found a nice full view of the Oregon State Tuberculosis Hospital. The building is currently being used as the Campus Services Building (CSB).

According to Internet rumors, the building is haunted by a “friendly” ghost, the details of the haunting involve a nurse who lived on the 7th floor and died there.

The building was erected in 1939 and served as a Tuberculosis Hospital until the late 50’s and early 60’s when patients were then transferred to the Salem TB Hospital.

The HIC is a fantastic resource for photographs from OHSU’s history. The full inventory is 166 pages.

More information on Tuberculosis in Oregon can be found at website for the exhibit on TB that HC&A did in 2005.

Posted by Historical Collections and Archives Staff at 10:32 AM No comments:

For those of you who have not heard, this year is the 100th anniversary of nursing education at OHSU. Last night I attended a gala at the Portland Art Museum to celebrate with nurses, administrators and friends and family. It was a wonderful venue and we were treated to wine, micro-brews and hearty hors d'oevres.

There was a wonderful presentation in the Grand Ballroom where Barabara Smith Conrad, internationally acclaimed mezzo-soprano, gave a wonderful performance of spirituals, accompanied by her dear friend on the piano and a protege soprano (sorry, I didn't catch their names). We were enthralled, standing to applaud through-out the show. Ms. Conrad proclaimed her love for Michael Bleich, Dean of the School of Nursing. She descended the stairs from the stage to sing a love song to him; they gazed into one another's eyes and at times embraced. As the song ended, they kissed. After her performance, Dean Bleich, still flushed, confessed that he had never been sung to before and that his temperature was just beginning to cool down. This, to the applause and hoots and hollers from the audience.

From the brochure, we have short vignettes that tell the history of the school:

Education: "Multnomah Hospital Training School opened in 1910... On June 12, 1911, seven nurses graduated in a ceremony at First Congregational Church. In 1926, a four-year bachelor's degree was offered. In 1964, Eugene Mitchell was the first man to earn a bachelor's degree and the first African American graduate was Beatrice Gilmore in 1955."

Research: "1970: The first faculty with doctorates were appointed. May Rawlinson ,'43 and Maxine Patrick were the first Ph.D.s on the School Nursing Faculty. At the time, only 1 percent of nursing faculty nationwide held Ph.D.s. 1981: The first research conference was held. Dean Carol Lindeman, RN, Ph.D, F.A.A.N., was a nationally known researcher. During her tenure, the SBHE approved research as an official mission of the school."

The brochure goes on to say, that over the last 100 years, the OHSU School of Nursing has never lost their focus - "using their energy, skills and talents for the ultimate good of patients, families and communities."

Who doesn't love nurses. They take care of us and from an archivist's point of view, they're some of the best record keepers around. I felt so very proud to be there and to have been a part of providing materials to the researchers who spent time in our reading room, researching the history of the school.

As Dean Bleich was thanking people for all that they had done to make the School of Nursing a success, he had a long list of accolades and remarks of appreciation for those who had made the centennial celebration possible; I almost fell out of my chair as I heard him announce the Historical Collections & Archives' wonderful exhibit on Grace Phelps, RN that is now on display in the OHSU Library. I am still smiling.

By Monday, you are welcome to visit the online version of the exhibit here.
Posted by Karen Peterson at 10:07 AM 1 comment:

That's right, it's Preservation Week! ALA is asking librarians to use this time to connect to communities about the preservation needs and cultural value of shared and personal collections.

I'm feeling thankful today, so rather than offering my expert opinion about humidity control and archival supplies, I want to recognize some members of the OHSU community who make it possible for HC&A to preserve its irreplaceable collections:

Carl Gioia and the staff of OHSU Facilities and Real Estate, who came to the rescue when a roof leak unexpectedly recurred in one of our storage rooms. We were overjoyed to hear that a re-roof of the Old Library will be underway very soon.

David Bachman and Brad Page, campus locksmiths, who worked with me on a security upgrade that helps everyone in HC&A sleep at night, and patiently responded to all my questions about how those tricky key things work.

These staff members' contributions all point to the essential idea that preserving collections is a top-down process - beginning with a solid plan for control of your spaces, and then proceeding down the line to the nitty-gritty of item-level preservation. All the acid-free interleaving in the world won't help you when the roof leaks.
Posted by Maija at 10:14 AM No comments: