This One Will Kill You
Oregon's wet climate is a perfect environment for all kinds of fungi. Sadly, for many Oregon folks, the troublesome mushrooms grow in our lawns. But for others, they signify a treasure trove of dining pleasure right out their back door. But beware, people! If you are not forearmed with knowledge of which are edible and which are deadly you can find yourselves in a good deal of trouble or maybe even dead. And even with this knowledge, the worst can happen.
Today's article from 1953, reports that artists, Michele Russo and wife, Sally Haley, found out about the danger of those pesky lawn mushrooms the hard way. Michele Russo is a well known Northwest artist and it is said that he is renowned for bringing modernist art to the Pacific Northwest. He came to Portland in 1947 and taught for many years at the Portland Museum Art School, now known as the Pacific Northwest College of Art.
The mushroom, genus Galerina, insideously resembles an edible mushroom that is said to be delicious. Late in January, Michele and Sally went out to gather mushrooms from their neighbor's lawn and took them home to eat. They gathered 4 types of fungi and tossed the 3 that they recognized as poisonous. The fourth they identified wrongly from the color photographs and description of the Amanitopsis fulva in their guide to edible mushrooms. The couple cooked them up as the main dish for dinner. Their sons, Mike and Gian, did not eat with them, not having a taste for mushrooms.
About 12 hours later, both Michele and Sally were experiencing symptoms that Sally knew were those of mushroom poisoning. Their son Mike, called our good friend, Dr. Charles Grossman, then clinical instructor of medicine at the University of Oregon Medical School. Both Michele and Sally were taken to the hospital, while Dr. Grossman gathered mushrooms from the neighbor's lawn.
Even after consulting with local and nationally known experts, the specimens could not be identified. Dr. Grossman airmailed dried specimens and spore prints to Dr. A. H. Smith, professor of botany at the University of Michigan, and an expert on mushrooms. It was confirmed that the species had not yet been described nor photographed. However, Dr. Smith was preparing a monograph of the genus Galerina and declared this "a real find". William Gruber, photographer for the two-volume textbook on mushrooms by Dr. Smith, would plan a visit to Portland to photograph this obscure mushroom.
Fortunately, Sally had not fully digested the mushrooms and had vomited profusely. Michele, on the other hand, had fully digested his dinner. They were treated for their symptoms following examples of treatment of other cases of mushroom poisoning. A new drug - salt-poor albumin - was also used. Since this drug could not be had in drug stores, the Red Cross supplied what was needed. The county Red Cross also donated six whole blood transfusions for Michele. Russo was unconscious for days and was kept in an oxygen tent.
Michele, at the time of the writing of this article, was still very sick and no date for his release from the hospital had been given. But Sally was released after two weeks. I suppose we can say that they were lucky to come out relatively unscathed since the poison from mushrooms attacks the liver, kidneys and brain.
Few doctors had experience in treating mushrooms, the article says, and the Russo's poisoning led to conferences at the Medical School and Hospital.

Posted by Karen Peterson at 8:45 AM No comments:

The week everything broke

Over the past few days, our scanner developed a bad attitude, our printer stopped speaking to our computers, and our external hard drive snapped, "Don't even try to save one more tiff on me." After many phone calls, generous help from other library staff, and a visit from a self-described geek, we are almost back on our feet - just in time to solve the decidedly analog problem of "Where the heck is our run of Archiv für pathologische Anatomie und Physiologie und für klinische Medizin?" The library holds ten volumes of this important journal founded by Rudolf Virchow, who is celebrated as the father of modern pathology. One of the volumes is needed for an upcoming lecture, and "We can't find it" is not an option!

A few well-placed emails and phone calls later, we determined that these early volumes were re-bound under the title Virchows Archiv (the title by which the journal is known today), and shelved accordingly. 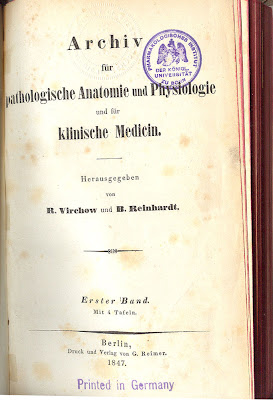 Our Volume 1 of Archiv für pathologische Anatomie und Physiologie und für klinische Medizin hails from the University of Bonn's Pharmacology Institute, spent many decades in the library stacks, and now has a home in the Classic Article Collection.
Posted by Maija at 3:12 PM No comments:

Many of the reference questions we get from the general public are about medical equipment, supplies, and other paraphernalia we archivist types call "artifacts." Some people have equipment they've inherited from a family member, while others are collectors, or just found something neat at a flea market and want to know more about it. While we try to help everyone as best we can, we aren't always able to perform the in-depth research these questions demand. In these cases, we try to refer our patron to some resources that will help get them started on their own.

Today I want to highlight just one of the terrific resources out there for researching medical artifacts.

The American Armamentarium Chirurgicum is a catalog produced by George Tiemann & Co., a leading 19th century manufacturer and retailer of surgical equipment. HC&A's History of Medicine Collection includes the weighty, 846-page catalog from 1889. The catalog's preface anticipates the reasons that the American Armamentarium Chirurgicum is a valuable resource to this day:

"In surgical works many of the instruments for performing operations are not illustrated. In illustrated catalogues, on the other hand, a description of the modus operandi is wanting. A good drawing of an instrument imparts an accurate conception of its form and construction. A description of the application added to this gives a clearer idea of its suitability to the end proposed."

Following are hundreds of pages of elegant technical drawings and descriptions of state-of-the art equipment, such as these medicine cases: 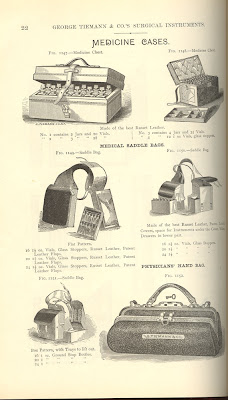 A contemporary reviewer even predicted, "The future student of surgical technics will find this work a rich mine for his explorations."

The 1889 American Armamentarium Chirurgicum is also available in a centennial edition facsimile, and the 1879 catalogue can be consulted free! free! free! via Google Books.

Watch for more posts on researching medical artifacts!
Posted by Maija at 11:41 AM No comments: