The Still Unsolved Mystery of the Provenance of our Sinhalese Olas

Strings of Pearls
This is how the good writing of Sinhalese olas has been described. The sharp stylus of brass or iron, covered in silver or copper, rests in a notch of the thumbnail of the scribe. He scratches first the inscription and then covers the leaf in ink made from oil and lampblack. Wiping off the excess ink, the letters appear as a perfect string of pearls.

These beautiful “books” consist of indigenous script written on immature Talipot palm leaves that are cut to a uniform 2 ¼ inches in width. The leaves are steeped in cold water, brought slowly to a boil and then laid in the sun for 3 days, after; they are arranged beneath the moon to bathe in the dew of 3 damp nights. Then after, a young monk pulls the leaves up and down along the length of a smooth, cylindrical Area nut palm branch until it is polished.

The painted and decorated wood covers, the red, white and blue plaited cords, the medallions, the knots, the inscriptions and the width and length are prescribed by customs that are century’s old.

The way in which the leaves are perforated and how the cords are to be wrapped round the ola follow traditional norm.

For those of you who read our blog, you will probably remember that Sara posted a mention of our three olas a few years back: “One of ours was translated in part a few years ago by a relative of a library staff member who could read the Pali Sinhalese”, she said. He reported that the first two leaves of the ola contain the recipe for "King Devil Oil," but that the following leaves (most of the text) are instructions for administering the oil to the patient, including the chants that should be recited during treatment. The whole document, including the recipe, is written in rhyming poetry. It was probably meant to be chanted or sung, and the spacing of the words, as well as decorative flourishes at the end of the lines, indicate the pace at which the words were to be chanted.”

We’ve been revisiting this old mystery this week as we add our collection of Sinhalese olas to Archivists Toolkit and prepare for an upcoming project in which they will play a crucial role. Again we puzzle, what is the provenance of these treasures? There is a cloth tag hanging on the cording of one, stating that it was presented by Casey A. Wood, MD, but to whom it doesn’t say. We believe that he may have given them to John Weeks, MD, but we can’t be sure.

The only clue to their provenance is a book in the Library with an inscription from Wood to Weeks. (Weeks donated a great deal of money to assist in the construction of our first library building in 1939.) So we know that they knew each other, most probably because they were both ophthalmologists and perhaps shared an affinity for history. Wood spent years collecting olas for McGill University in Montreal, traveling extensively in India and Ceylon, as well as in the West Indies studying indigenous medicine. The precious olas now reside in

the Library of the Medical Faculty at McGill, except for these three.

If you would like to read more about Sinhalese olas, man of the world, Casey Wood wrote a great article about medical olas from stunning Srinagar Kashmir, which was published in the Annals of Medical History, V8 1926.
Posted by Karen Peterson at 12:53 PM 2 comments:

Treatise on the Science of Muscular Action

Here's another one from our historic book collection. A reprint of the 1794 Treatise on the Science of Muscular Action by John Pugh, Anatomist.


Case III
From Col. Orchard, M.P.
Sir,
I cannot defer thank you for the benefit I have received from your excellent method of treating gouty persons who have been deprived of the use of their limbs.
I do with gratittude acknowledge that your muscular exercise has restored health, and the action of the muscles to myself and to many of my acquaintance.
If any persons are desirous of a more particular account, I shall be happy to be of any service to them and to you. I am, wishing you ever success,
Your obedient humble servant,
Paul Orchard
Chesterfield-street,

Yes-- parking. The word might incite feelings in anyone who works on the hill, from frustrating experiences trying to find a parking spot, to elation after having found the perfect place in someone's driveway that you pay for each month, or to the long walking distance from your single diamond parking across campus to Jones Hall. Whatever your emotions may be, parking is an institution on OHSU Campus.

A few years ago Sara blogged about re-housing some of the images we had acquired--of parking. (And yes, we now have these images in sleeves!) Personally I find these photographs fascinating and when I saw the folder labeled "parking" in our historical image collection, I knew I had to look. Yes, more treasures over here in Historical Collections & Archives.

Whatever emotion you have regarding parking, these are two images that got me emoting. 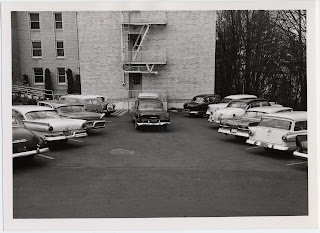 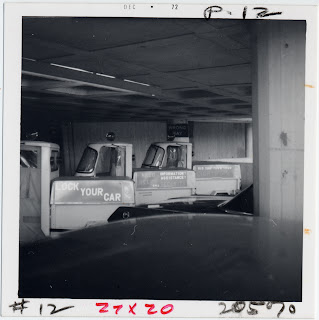 Again, just peeking in boxes I find many interesting items. Today I stumbled upon the George W. Tamiesie collection. The finding aid for this collection is even online. (pdf) It consists of three notebooks full of pencil notes; most of which would take a lot of time and concentration for me to read--namely because I'm unused to reading such beautiful script!

Pictured below are the cover and interior pages of one notebook. On the outside is written "general notes in gynecology." 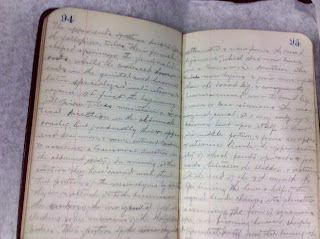 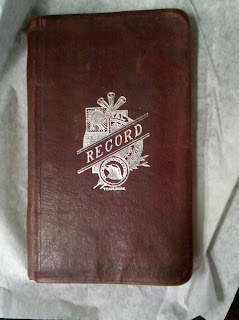 Perhaps my favorite page, however, is this one. 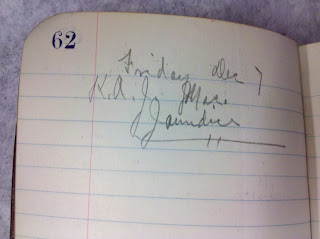 I am assuming that these are lecture notes, not notes on a patient named K.A.J. MacKenzie, with jaundice!
Posted by Emily at 8:56 AM No comments: