Diversity on Campus
Big News in the 50's
During the summer, OHSU students participated in focus groups just after a diversity climate survey was conducted by the OHSU Diversity Advisory Council. Just yesterday the DAC began formation of employee focus groups to continue their assessment.
According to the OHSU policy on diversity, diversity includes age, culture, disability, ethnicity, gender, national origin, race, color, religion, sexual orientation, diversity of thought, ideas and more. Further more, OHSU President, Joe Robertson, has been quoted as saying that "Diversity is vitally important to OHSU's evolution as a world-class academic health and science university. We seek to integrate diversity within all areas of the university and all parts of our mission. Enriched with the perspectives and experiences of a diverse community, we can realize our true potential for creativity and discovery, quality patient care, educational excellence, and outstanding service."
As I thought about our student and employee populations and how relatively diverse we are, I was reminded of two newspaper articles in the clipping folios from the early 1950's. There are lots of articles written about many firsts at OHSU. Two in particular caught my eye. I had written myself a note to include these stories in a blog post. Today seemed right since I had just read about OHSU's committment to continue the dialogue around diversity and cultural competency.

It was important enough and perhaps unusual enough in the 1950's for the newspapers to report in a tiny article that Samual Ojo from Lagos, Nigeria was the first African to enter UOMS. In 1953, as a first year student, he was elected to serve a two year term on the student-faculty committee. Here's a photograph of Sam as he graduates from UOMS in 1958.
The second of the two articles reported that, Yoo Bock Lee was the

first Korean ever to study at UOMS (1954). He took advanced studies in pathology as a resident in the University's hospital and clinics. After his studies here in the states, he would return to Korea to teach pathology at his alma mater, Severance Union Medical School, in Seoul. Dr. Lee had pointed out to the reporter that Korea had 3,000 physicians to treat 20,000,000 people.
Small seeds. Big trees.

Posted by Karen Peterson at 2:29 PM No comments:

A Retirement from the School of Medicine

Dr. Kenneth Burry, a fertility expert who has served at OHSU since 1976, announced his retirement. The School of Medicine announced this in their news headlines last week. After reading the press release, wherein I learned that Dr. Burry was instrumental in the founding of OHSU Fertility Consultants in 1982, and in the first in-vitro fertilization attempt occurring here in the Northwest; I wanted to see if he had any of this documentation.

You bet we do! Pictured below are some of the news clippings from February 16, 1983, when the news broke.

One headline is from The Oregonian, and the other from the Statesman-Journal.We have many more clippings that document this event and Dr. Burry's contribution to fertility medicine. We even have some of the first brochures from OHSU Fertility Consultants for anyone to come see over in the History of Medicine room. 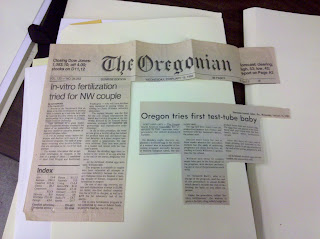 Congratulations to Dr. Burry on his retirement, and on being a pioneer for OHSU's adventures in fertility research and service.
Posted by Emily at 10:07 AM No comments:

Oregon State Board of Health

We've had a regular patron coming in this year, who is working on a Senior Thesis over at Reed College across the river. He's been viewing a lot of documents on the history of health in Oregon, and recently we pulled the Biennial Reports from the Oregon State Board of Health. 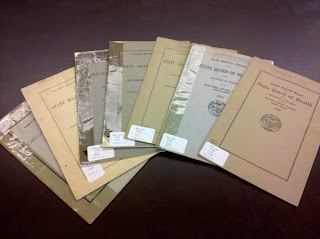 The first of these reports, dated January 1, 1905, outlines the creation of the Board of Health.


The Board was created by the Legislative Assembly of 1903, and immediately thereafter, in accordance with the act creating it, the Governor appointed Drs. Andrew C. Smith of Portland; C.J. Smith, of Pendleton; E. Barton Pickel, of Medford; Harry Lane, of Portland; E.A. Peirce, of Salem, and Alfred Kinney, of Astoria, members consisting the said Board of Health.

The Board was organized on March 14, 1903, and appointed Dr. Woods Hutchison, of Portland, its secretary and State Health Officer, and began its work at once, as will be observed herein; but owing to the fact that the National Conference of State Boards of Health was to adopt a standard of set birth and death blanks for the entire United States in June, 1903, it was deemed advisable by the Board to wait until this standard form could be secured before beginning its formal registration; hence July was the first month covered. As will be noticed, reports of contagious diseases were begun at once, and date from May.

Later on the in the report we see that the first of the contagious diseases discussed is the Bubonic Plague. It didn't seem a major issue and the report notes that, "Two cases of death from plague were reported in the Portland Chinatown, but prompt investigation and post-mortem examination showed the reports to have been entirely without formulation."

Other diseases mentioned in the report are smallpox, typhoid fever, scarlet fever and diphtheria, measles, and tuberculosis.
Posted by Emily at 9:15 AM No comments: