It is a very small book, just 14cm in length and 7.5 cm wide and 4 cm thick. It is the 1638 edition of Hippocratis coi Aphorismi. It is a marvel to behold and an amazing thing to hold. The soft, yellowed vellum binding is cool to the touch and completely unembellished, while the text-block edges are rough cut and stained tea brown. The cover of the spine is slightly separated revealing the narrow leather thong holding the stiff cover to the text block. In hand lettering, it reads: Hippocrates Heurnio. The paper has a slightly sandy texture and nary is a page torn. Hippocrates wrote Aphorisms in 400 B.C.E.

And how did it happen to come to us… this valuable and rare edition? There are only two clues left to us. Revealing the tiny manuscript's custodial history are two bookplates glued to the endpapers. One bookplate displays a coat-of-arms and a banner which reads: Prodess Quam Conspici, below in a lovely script is the name Peter Nouaille, Greatnefs. This I have learned is Peter Nouaille of Greatness, Kent, England, a breeder of silk worms who had built a silk mill on a tributary of the River Thames at Seven Oaks. "This mill was built in 1761. Peter came into the possession of the manorial watermill on marrying Elizabeth de la Mare of Greatness. Nouaille went bankrupt in 1778 but recovered, employing 100 people when he retired in 1800. It closed down after Nouaille's death c1828." The mills on the river's tributaries were immortalized in the poem Ode on the Silk Mills at Greatness by Joseph Harrison.

How Peter Nouaille came into possession of this charming little book, and how dear Peter was divested of it, we shall most assuredly never know. But on an auspicious (for us) but obscure date, another custodian came into possession; when and how we cannot divine. But we do know his name because we find the second clue… a book plate belonging to the Medical School Library with the inscription: "Presented by J. Ettelson, M.D."

Jesse Ettelson, MD, was born in Sprague, Washington in 1885, the son of Washington pioneers. He graduated from the Washington State University and the University of Illinois, gaining his Doctorate of Medicine from Rush Medical School in 1910. He went on to graduate studies at the Vanderhill Clinic in New York, where he studied dermatology, and studied also at the University of Vienna in Austria. He came to Portland and served his internship at Good Samaritan Hospital and was one of the first dermatology specialists in Portland. He taught for a number of years at the University of Oregon Medical School and practiced in Portland until his retirement in 1941. He died at his home on a Thursday in 1968.

How then can we imagine Ettelson coming upon this book? Was he strolling along the street of some city in Europe, or in New York or even in Portland? Had he entered a small dim book store and found the small volume of interest? Did he pick it up, examine it and found it as lovely as I have on this dark and rainy day? Perhaps.

You can find the exquisite poetic work in translation from the Latin and the Greek http://classics.mit.edu/Hippocrates/aphorisms.mb.txt You can see other copies that have been scanned at Google Books. But the real thrill to be found is beyond its content and lies within the context of the object and its history. Friday, Todd Hannon, reference librarian, will be carrying it to the History of Medicine class at 12:00 noon for the students to see and to handle. Oh! The joy of rare book collections.

Posted by Karen Peterson at 12:00 PM No comments: 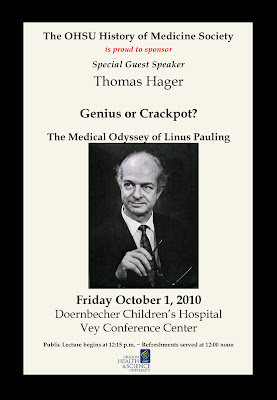 The OHSU History of Medicine Society invites you to the next presentation in the History of Medicine Society Lecture Series:
"Genius or Crackpot?  The Medical Odyssey of Linus Pauling"
Guest speaker: Thomas Hager, author, journalist, editor and publisher.
Friday, October 1, 2010
Public lecture: 12:15 p.m.
Refreshments served at noon
Location: Vey Auditorium, Doernbecher Children's Hospital, 11th Floor
Thomas Hager has written six books on health and science, and more than 100 feature and news articles in periodicals ranging from Readers Digest to the Wall St. Journal, Self, American Health, Journal of the American Medical Association, and the Medical Tribune. Reviewers have called his work “engaging” (New York Times), “fascinating” (Los Angeles Times), “magisterial” (London Times), and “authoritative” (Nature). Hager’s most recent book, The Alchemy of Air, a history of the discovery of nitrogen fixation, is a Kirkus "Best Book of The Year"; Borders "Original Voices" Selection; and was shortlisted for the National Academies Communications Award.
An Oregon native, Hager started his writing career after earning a master's degree in medical microbiology and immunology from the Oregon Health Sciences University, then a second in science journalism at the University of Oregon. He served as a communications intern at the National Cancer Institute, worked as a freelance medical writer, was a regular contributor to American Health, and was a West Coast news correspondent for the Journal of the American Medical Association. In 1983 he became founding editor of  LC Magazine, a trade publication for scientists. At the University of Oregon he edited the award-winning Oregon Quarterly magazine for a decade, and then served a number of years as the UO’s Director of Communications and Marketing, and director of the University of Oregon Press. He has spoken widely, to groups ranging from AAAS and the National Institute of Standards and Technology, to media including C-Span’s “BookTV” and National Public Radio’s “Weekend Edition,” “Science Friday,” and “Tech Nation.”
His most recent book is The Alchemy of Air: A Jewish Genius, a Doomed Tycoon, and the Scientific Discovery That Fed the World but Fueled the Rise of Hitler (Harmony/Crown 2008, Three Rivers Press 2009). His other books include The Demon under the Microscope: From Battlefield Hospitals to Nazi Labs, One Doctor’s Heroic Search for the World’s First Miracle Drug (Harmony/Crown 2006, Three Rivers Press 2007); Aging Well (with Lauren Kessler, Fireside Press, 1990); Force of Nature: The Life of Linus Pauling (Simon & Schuster 1995); Linus Pauling and the Chemistry of Life (Oxford University Press 1998); and Linus Pauling: Scientist and Peacemaker (ed. with Clifford Mead, OSU Press, 2001). He is currently researching a book on the problem of world hunger and approaches to its solution.
Thomas Hager lives in the hills near Eugene, Oregon, with his wife Lauren Kessler. They have three children, Jackson, Zane, and Elizabeth.
The lecture is free and open to the public. If you have a disability and need an accommodation to attend or participate in this event please contact Chris Shaffer (503-494-6057) at least five business days prior to the event.
Posted by Emily at 1:52 PM No comments:

I was remiss in posting that lovely snapshot of the ship model given to the School of Dentistry by its sister school,   the Hokkaido University School of Dentistry. Today Ian showed me this lovely image of former Portland Mayor Terry Schrunk with what one could only presume were representatives from Hokkaido University, sometime between 1973 and 1975. 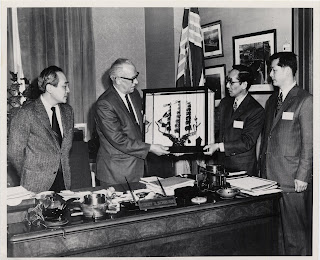 Although on the back of the photograph is penciled "ca. 1975," Mayor Schrunk's term of office ended in 1973, and the Agreement for Sister School Affiliation was effective January 1, 1974. 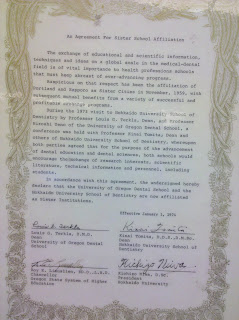 We have many other interesting artifacts from this continued relationship with the dental school's sister. Wall hangings, sculpture, and more.
Posted by Emily at 3:52 PM No comments:

Ahoy! What I Spied there Across the Way

Each day I've been here I've noticed this interesting ship perched elegantly among some other materials. It perches elegantly in our storage facility, and, being it is not a medical instrument, I find it intriguing as part of our collection. 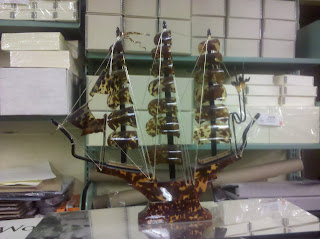 Not knowing much about nautical vessels, I wonder what are those spires near the stern of the ship?
Posted by Emily at 2:00 PM No comments: