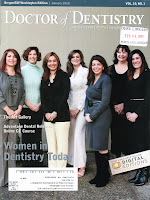 In another of those instances of serendipity that occur, it seems, whenever you make yourself alert to them, our post of yesterday is echoed in the cover of the most recent issue of Doctor of Dentistry (Oregon/SW Washington edition).

Short interviews with the eight dentists follow, with each addressing why they chose dentistry, how they manage work/life balance, and what they enjoy about the profession. In order to help support women in what remains a male-dominated profession, Motlagh hopes to organize "a study club for female dentists in the near future." To those women considering dentistry, Kharrazi offers this advice:

The most important thing I can tell people in any situation is never give up. If you want to pursue a career in dentistry, you can do it if you just do not give up. Will it be difficult? Most likely. Is it worth it? Immensely!

As we noted just about a year ago, women have been taking up that challenge in Oregon since the turn of the last century.
Posted by Sara Piasecki at 9:07 AM No comments:

Looking, as always, for something else, I came across something rather more interesting than what I was hunting.

The Fall 1968 issue of the University of Oregon Medical School Report to the Alumni contains a six-page article on "Oregon's Women: Bright, Attractive, and Determined." [Let's ignore for a minute the fact that the editors felt they needed to include a comment on the women's looks in the headline.]

The occasion for the write-up was the admission that fall of eight women in a class of 92, "the largest class of women medical students in its history." The reader then gets a brief history of women in Oregon medicine:

Women medical students and graduates seem to have found a minimum of antifeminine attitude in Oregon for many years. Setting a precedent, the Multnomah County Medical Society admitted 11 women to membership in 1903. The first woman physician to head a state medical association, Leslie Kent of Eugene, was elected president of the Oregon Medical Association in 1948.

In 1900 there were 27 women physicians in Oregon of which 14 were "local" graduates. Before 1900, the local schools had graduated a total of 44 women. Currently, there are 24 women enrolled as medical students in the UOMS. There are no women interns this year, but there are nine women residents and three fellows. The total number of women graduates from the institution since 1950 is 65 from a total of 1314.

The rest of the piece is made up of short interviews with each of the eight incoming freshwomen: Nancy Day Adams, Maureen Alice Connolly, Leslie Johnson Dillow, Ann Jensen Vanderheit, Eleanor Jullum, Karen Krebs, Regina Ross, and Cheryl Leslie Taubman. Each was asked the usual questions: why did you choose medicine? Have you encountered any antifeminine discrimination? Do you think medicine will negatively impact your ability to marry or have a family?

To the question, Why did you apply at Oregon?, Karen Krebs noted that:

When I was applying to medical schools one of the things I did was draw out a chart with tuition, fees, and the number of girls admitted as opposed to the total number in the class. Oregon ranked pretty high. I knew this was one of the better schools--but it was the number of girls accepted that was impressive. I also heard by the grapevine that Oregon really has a good attitude toward women as opposed to Washington for example.

The trend has been generally upwards since then; the OHSU SOM Class of 2010 entered in 2006 with 63 females and 56 males.
Posted by Sara Piasecki at 12:13 PM No comments:

I'll think up more trouble for you!

Another year, another rabble-rouser.

In April 1933, University of Oregon Medical School Professor T. Homer Coffen, MD, was moved to write a formal letter of protest to Ralf Couch, Superintendent of the Outpatient Clinics, about a "very annoying situation." It seems that the class held immediately before Coffin's cardiology clinic was run by A.J. McLean, MD, neurosurgeon and iconoclast. McLean, Coffen charged, "does not dismiss his class at 10:50 as he should" and so students were tardy to cardiology clinic. "If this happens again, I think I shall dismiss those who happen to be present and walk out!"

As if this were not audacious enough, Coffen has added in manuscript beneath the typed message:

What about a nurse for our cardiac clinic Wec. 1-3 PM?
What about a technician for the electrocardiograph? THC
(I'll think up more trouble for you!)

One wonders how persuasive this approach was, in contrast to McLean's tendency to write scathing satires and publicly decry what he deemed inadequate care. We can only imagine that Mr. Couch earned every penny he made. 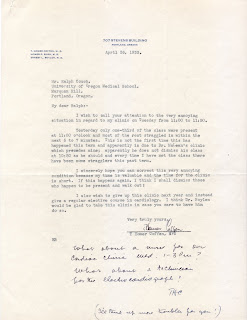 [From University Relations and Public Affairs Records, 2004-008, currently undergoing processing]
Posted by Sara Piasecki at 9:10 AM No comments:

Back in April of 1977, President Lewis W. Bluemle, M.D., announced a new program at the University of Oregon Health Sciences Center: "Constructive Concerns" was intended to allow employees an "opportunity to receive answers to questions about institutional activities as well as to make suggestions about Center operations."

In a memo to all staff (below), Bluemle noted that the blank forms "will be sent to all department and division offices and will be available in Personnel, Payroll, University Relations, Hospital Administration and Physical Plant offices." 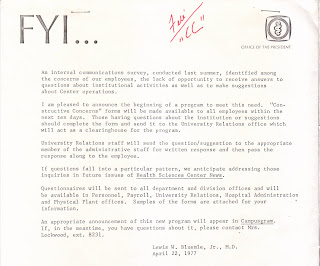 Well, it took only seven days for the colorful Charles T. Dotter, M.D., to submit his candid comment on "Constructive Concerns": 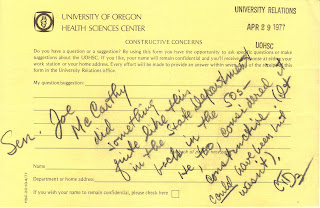 "Sen. Joe McCarthy did something quite like this in the State Department back in the 50s--he, too, considered it constructive. (It could have been but wasn't). CTD"
Posted by Sara Piasecki at 2:17 PM 1 comment: 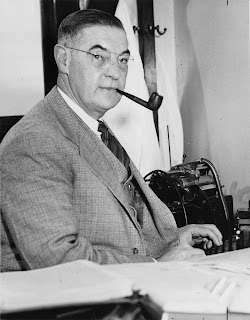 Uncovered in unprocessed materials this morning were two audiocassettes (magnetic reel-to-reel 90 minute tapes, for you in the iPod generation). Both are recordings of talks given by William K. Livingston, M.D., past chair of the OHSU Dept. of Surgery.

One cassette holds a lecture on pain presented by Livingston at the University of Mexico in March 1966 (approximately 50 minutes running time). Opening with the seemingly simple question, what is the definition of pain, Livingston draws on all he has learned over the course of his fifty years in medicine to convince his audience that there is no simple definition, and no complete definition as yet, of what pain is. He cautions the crowd to always "maintain a healthy skepticism" when conducting pain research, whether towards inferences drawn from animal models, the unexpected behavior of experimental controls, or researchers boasting of new definitions of pain.

The other cassette contains a circa 80-minute lecture on S. Weir Mitchell, delivered by Livingston at a Detroit conference in October 1964, which begins with an overlong but rather entertaining joke about a lion tamer. On Side B, we hear Livingston recollecting the event, telling us about the Concertone recorder he took along with him and about his great surprise when the attendees brought out a huge cake before the talk to celebrate his birthday. It's an unexpected, intimate contact with the great surgeon.

Livingston (1892-1966) was educated at the University of Oregon (BA and MA) and obtained his medical degree from Harvard (1920). He completed his surgical residency at the Mass General before coming to Oregon in 1922. He joined the faculty of the University of Oregon Medical School in 1925 and became chair of the Dept. of Surgery in 1947. He was named Emeritus Professor of Surgery in 1961. He was the author of The clinical aspects of visceral neurology (1935); Pain mechanisms (1943); and posthumously, Pain and suffering (1998).

Let us not think that an internationally known pain researcher must be dour and and serious. In a memorial oration delivered probably by Hance Haney (we have an unsigned transcript), we read:

Bill Livingston cared deeply. Nobody enjoyed more than he did levelling himself and others with laughter: he was caring for us and curing us with his balsam of stories for every occasion, and stories for no occasion other than the advantages of delight. His gaiety carried us all away from ourselves with laughter, and allowed us to take another look at our lives.

In a very sad, anonymous, typed note, included in Livingston's Biographical File here in the archives, we read: "Oct. 14, 1980...Bust of Dr. L. was given back to his family. After Margaret Hughes retired in 1965, we thought few would know about him. So, she had it returned." We remember! We remember! And we will remember.

A collection of his papers is available at the UCLA Louise M. Darling Biomedical Library.
Posted by Sara Piasecki at 2:47 PM 2 comments: