Celebrating a birth--with a skull

Recently, I had the opportunity to look through the Biographical File on Adalbert G. Bettman, MD, University of Oregon Medical School alumnus and faculty member, Oregon's first plastic surgeon, inventor of the first sanitary sugar dispenser, and all around interesting character.

One of the two folders in the Bio Files contained primarily archival material--certificates and degrees, a handwritten receipt book, and a collection of programs from alumni reunions. These materials must have become separated from his collection of papers somehow; luckily, it's easy enough to reunite them.

The reunion programs are particularly interesting, given that Bettman was instrumental in establishing the UOMS Alumni Association in 1913. Even cooler, the program from that first 1913 reunion of the Class of 1907 is one of those that were donated.

To celebrate their sixth anniversary, the alums met at the Hotel Oregon on April 29, 1913. A list of class members is included on page two and a photo of the late Fred Russell Chaney (1885-1908) is tipped in. Page three outlines the dinner menu, which begins with "Martini Cocktail" and ends with "Cigars. Cigarettes" and the penciled notation "Mumm's extra dry". I did a web search to determine what, exactly, "Margeaux Repsold" was, and the only hit was on a digitized copy of the 1913 Medical Sentinel in which Bettman published a notice about the event. (Anyone have any thoughts on this? Any culinary scholars out there?)

Page four includes a few lines from Thomas Moore's poem "Fly not yet":

Oh stay, oh stay
Joy so seldom weaves a chain
Like this tonight, that, oh 'tis pain
To break its links so soon. 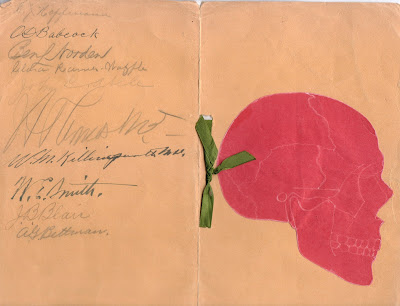 Posted by Sara Piasecki at 1:00 PM No comments: 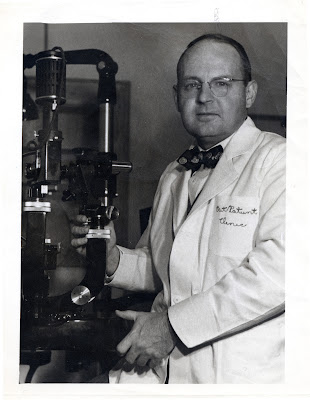 In celebration of the Pacific Northwest summer--i.e., a hiatus in the rain--we are pulling the exhibit cases back out from under their shelter (roof leak be damned!) and installing our newest exhibit, "Artifacts in the Kenneth C. Swan, M.D. Papers". While the papers themselves are not yet fully processed, the objects cried out for display; those small enough to fit into the exhibit cases are available for viewing in the third floor lobby of the OHSU Library in the BICC building on the Marquam Hill campus.

The title quote is one of Swan's many nuggets of wisdom, and certainly a truism of long standing (the modern formulation being, perhaps, "What have you done for me lately?")

The online component of this exhibit will include the full text of the brochure and some images from the collection. Since it is not yet up on our web site (but will be here soon), I reproduce here below the text (but not the images), written by Archivist Karen Peterson. Enjoy!

Kenneth Carl Swan, the father of ophthalmology in Oregon, was born in 1912 in Kansas City, MO. He moved to Portland as a boy where he attended Franklin High School and received his bachelor's degree from the University of Oregon in 1933. He went on to graduate with a medical degree from the University of Oregon Medical School in 1936 where he won a Rockefeller Student Research assistantship in pharmacology. He moved east to study at the University of Wisconsin but it was there that he made the decision to change his specialty to ophthalmology.

In 1938, Dr. Swan married Virginia A. Grone, daughter of Oregon pioneers and Portland native. They spent the following years at the University of Iowa College of Medicine while Swan completed his residency and subsequently he became a member of the faculty. In 1945, when he joined the faculty at UOMS, they moved back to Portland.

During the 1930's and 1940's, he conducted research that led to the creation of new drugs, for which he became internationally known, including the artificial tear, methylcellulose. Listed among his many accomplishments is his partnership with Dr. Leonard Christensen that led to the development of the world's first microscope for ocular surgery, his role in the development of new therapies for childhood glaucoma, binocular vision disorders and traumatic eye wounds and the Swan-White compound whose derivatives are still used in eye examinations today.

Dr. Swan also proved to be a brilliant and very successful fundraiser. In 1949, with the generous contributions from the Oregon State Elks, he was able to establish the first children’s eye clinic in an academic setting in the United States. The Elks have contributed millions of dollars and thousands of volunteer work hours to the Casey Eye Institute, working to establish and support the Elks Children's Eye Clinic.

During the 1980's, Swan partnered with Fredrick Fraunfelder, MD, who also succeeded Dr. Swan as chair of the department, to raise OHSU's first significant capital campaign, a $31 million effort to construct the Casey Eye Institute, which brought ophthalmic education, research and treatment into one center. In 2000-2006, he also helped to raise $16 million to advance Casey during OHSU's Oregon Opportunity campaign.

A respected and beloved physician and colleague, he was a teacher and mentor to more than 100 ophthalmologists, six of whom went on to chair departments at US medical schools. He was a member of many associations and a recipient of numerous awards and certificates, including the American Ophthalmological Society's prestigious award, the Howe Medal for distinguished service. At the time, Dr. Swan was only the 44th recipient in the Society's 112 year history. He received the Proctor Medal from the Association for Research in Ophthalmology and was also named the Governor's Scientist for Oregon. In addition, he received the UOMS Alumni Meritorious Achievement award, the highest honor granted by the school.

Undaunted by retirement, Dr. Swan continued to see patients and published papers into the 1990s. He died at the age of 95 on February 23, 2007, following his wife by just two months.
Posted by Sara Piasecki at 1:55 PM No comments:

Student records come to the archives

We're thrilled to announce that we have just today received from the OHSU Registrar's Office (medical/nursing) 16 volumes of early student records, from the Willamette University Medical Department, the University of Oregon Medical School, and the Multnomah County Hospital Training School for Nurses. Individual volumes are described briefly below, in this inventory created by the Registrar. The collection will be open to researchers with the caveat that some information may remain under FERPA protections.

Grey book (title not legible) contains what appear to be transcripts of student’s alpha order with start and grades dates recorded. Some of the start and graduated dates: 1919 – 1926

Donation to get the heart aflutterin'

For this week's visit, Charles Grossman brought us a working Sanborn Viso-Cardiette electrocardiograph (EKG) machine. This example of Model 51 (serial no. 3413) is a few iterations away from Sanborn's first portable EKG (you can see an early model here at the Sheffield Museum of Anaesthesia), and came with a power cord rather than a battery. Dr. Grossman's machine has a metal nameplate ("Made for Charles M. Grossman, M.D.") and a cloth cover to protect the wooden case. The electrocardiogram is recorded on paper--far inferior, to Dr. Grossman's mind, than the photographic paper used in an earlier machine he trained on as an intern in New Haven.

And yep, this one still works. 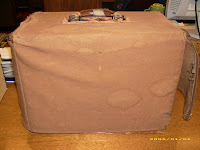 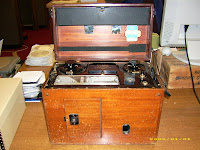 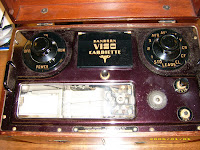 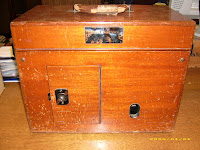