The collection includes financial ledger books from the 1970s to the late 1980s (when the society went digital for its accounting), member directories, meeting programs, updated by-laws from 2005, and a wealth of correspondence including... printouts of email! (It just warms my heart to see folks acting on archivists' advice to keep the really important documents in paper.)

Unexpectedly, the collection also contains a copy of an unpublished autobiography of Dr. S. Gorham Babson, M.D., known as "Gory" to friends and colleagues. Titled The Full and Wonderful Life of Gorham Babson, the memoir is short but sweet. The table of contents includes:

"European junket with the family--1924"
wherein we hear that Babson's father was so annoyed by the pigeons in Italy that he wanted to write to Mussolini to propose "a great pigeon shoot";

"Back to Oregon through the Panama Canal--1927"
wherein we find young Gory on a stopver in still-rustic Acapulco, watching cock fights;

"Again to Panama Canal, across South America and up to New York--1938"
wherein we get a glimpse of the locum tenens in North Portland that Babson took right out of medical school: it paid $200 a month, and came with a small office library but no R.N. to turn to for advice ("fortunately patients were not of litigious mind");

"How I married Ruth Lambert--1939"
wherein we hear that their first date was watching Sonja Henie skate at MSG, and that Guy Lombardo's orchestra provided the dancing music for their wedding day;

"How I started my practice--1940"
wherein Babson gets his start, even though "opportunities to practice the art for a living were not frequent" in Portland;

"Shirley Thompson: Supervisor of Doernbecher Hospital--1950"
wherein we hear of the efforts of "this innovative nurse" to establish the first nursery for premature babies at Doernbecher;

"How I became a professor of perinatology at OHSU--1961"
wherein we hear that the reason Babson gave up one of the leading private practices in Oregon was that his clinic was about to be demolished to make way for an expansion of the I-5;

"In search of Petra, our first trip around the world--1963"
wherein we hear of the ancient practice of the "open" airline ticket that allowed travelers to make up their itinerary as they went;

"Director of the OHSU Neonatal Center--1965"
wherein we hear about nurse Katie Simpson's technique for teaching staff to intubate neonates by practicing on cats;

"Epilogue"
wherein Babson thanks his daughter Jane for awakening in him an interest in creative writing, "restricted by years of inscribing medical manuscripts";

"World trips of the intrepid traveler"
which presents a chronological list of the highlights of a footloose life, one of the more intriguing of these being "An Eunoto, a jungle campsite where Maasi boys are admitted to manhood" (1979).

These materials, and the rest of the NPPS Records, are now available for research. But you'll have to wait until after July 4 to have at them; Historical Collections & Archives is closed Friday July 3 in observance of the federal holiday. Happy Independence Day!
Posted by Sara Piasecki at 8:02 AM No comments:

The life and career of Alberta Lucille / Dr. Alan L. Hart with collected early writings / [compilation and design, Jeremy Skinner ; exhibit and editorial, Jeremy Skinner, Doug Erickson, Paul Merchant].
Portland, Or. : Friends of the Aubrey Watzek Library, Lewis & Clark College, 2003.
We've shared some information before about Lucille/Alan Hart, a 1917 graduate of the University of Oregon Medical School. From the pamphlet:
"This introduction to the life and career of Alberta Lucille Hart/Dr. Alan L. Hart builds on two earlier sources: a 1999 presentation by Brian Booth and Thomas Lauderdale sponsored by the Oregon Cultural Heritage Commission, and a 2002 exhibit at the Aubrey Watzek Library at Lewis & Clark College, Portland, Oregon, presenting a number of items from Brian Booth's collection and the College archives."

Miller, Vern W.
Reminiscences and peregrinations / by Vern W. Miller.
[Salem, OR : The author, [1983?]
Dr. Miller was a 1930 graduate of UOMS, and a native of Scio and Aumsville, Oregon. This memoir contains the usual collection of anecdotes both humorous and instructive: "I finally was admitted to medical school in the fall of 1926. I knew no one, I was quite young, and unfortunately broke.... They gave me a box of bones, several big books and voluminous assignments. I went to my first class and we had an examination. My grade was a minus ten!"

Stern, Thomas L., 1920-
House calls : recollections of a family physician / Thomas L. Stern.
Wilsonville, Or. : BookPartners, c2000.
Dr. Stern, a 1950 graduate of UOMS, reminds us on the back of his book that he was Robert Young's role model for the character of Marcus Welby. Does this sound like Welby to you?:
"Medical school started with a bang. There were seventy-five of us, eight of whom were women--a remarkably high ratio for the times. It was the avowed purpose of the faculty to flunk out anyone who couldn't stand the pressure. My worst bang was in the Department of Human Anatomy; we didn't get along. The chairman of the department was a sadist who delighted in torturing the students he felt were inferior..."

Folin, Otto, 1867-1934.
Laboratory manual of biological chemistry, with supplement, by Otto Folin.
New York, London, D. Appleton and Co., 1922.[3d ed.]
No, it's true that Otto Folin was not a graduate of UOMS. However, this particular copy is extensively marked up with the notes of Dwight Hair Findley (as in the image shown here), graduate of the Class of 1931 . 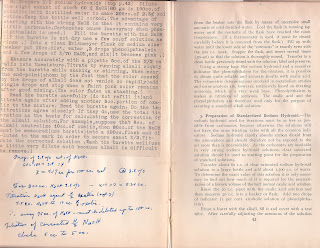 Boyd, Robert G.
Strong medicine / text by Robert Boyd, Curator of Western Heritage, and Vivian Adams, Curator of Native Heritage.
Bend, Or. : High Desert Museum , 1998.
This well-illustrated exhibition brochure, from a display mounted at the Brooks Gallery from May 1998-May 1999, provides a good overview of desert medicine from Native American remedies to the air ambulance.
Posted by Sara Piasecki at 1:01 PM No comments: 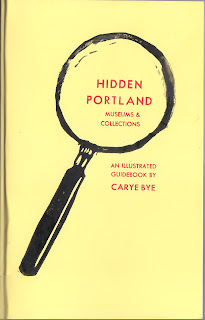 Last week, we obtained a copy of Carye Bye's new guidebook Hidden Portland: museums & collections during a visit to Reading Frenzy. The display of Bye's original artwork for the book adorns almost all the available wall space in the store, and includes her whimsical take on the Portland Aerial Tram. A rotating rack held more originals, card-sized sketches of points of interest from each of the museums and collections highlighted in the guide. Happily for us, one of OHSU remained for us to snap up: the foot treadle drill from the sixth floor of the School of Dentistry. 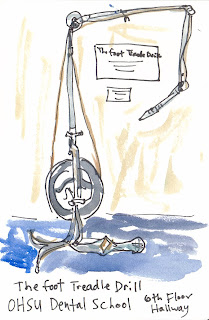 The guidebook really is a wonderful introduction to both well known (think Portland Art Museum) and lesser known cultural destinations in town. Our copy will be going into the collections here; if you'd like your own copy, you better act fast: as of last week, the limited run of 125 was already more than half gone.
Posted by Sara Piasecki at 8:10 AM No comments: