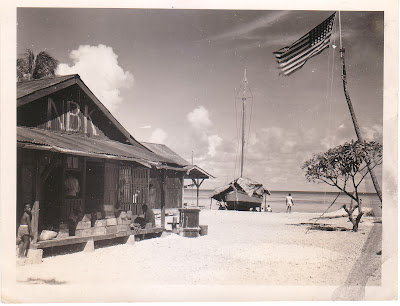 Flag Day is this Sunday, June 14. This photo, which was pulled today for different reason entirely, was taken by Lt. Comdr. Roger H. Keane, MD, on the Marshall Islands during his Naval service there in World War II. Enjoy!
Posted by Sara Piasecki at 2:48 PM No comments: 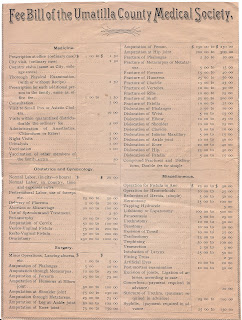 The June 1, 2009 issue of the New Yorker contains a really fascinating and well-written article by Atul Gawande, MD, author of Better and Complications, called "The Cost Conundrum." Gawande studies the practice of medicine in McAllen, Texas, "the most expensive town in the most expensive country for health care in the world".

About fifteen years ago, it seems, something began to change in McAllen. A few leaders of local institutions took profit growth to be a legitimate ethic in the practice of medicine. Not all the doctors accepted this. But they failed to discourage those who did. [emphasis added]

Greed has been a human vice since Moses came down from the mountain (and probably before that, too). Socialization into group ethics and norms should allow communities to maintain the desired standards of conduct.

Take, for example, this week's pet group, the Third Judicial District Medical Society of Oregon. In the summer of 1871, shortly after organizing, the society appointed a five-member committee to develop a fee bill. The fees would need to represent the "different points of practice in the several counties represented," and would (theoretically) be enforced by the group as a whole. Physicians charging more than the standard rate would be censured. Doctors were expected to police themselves, and they considered it a right and an obligation of professional practice.

Have patients, in their insistence on "shopping around" for doctors, contributed to this problem? Have physicians abdicated their professional responsibilities to police themselves? Or has the almighty Market overwhelmed both physician and patient in its cancerous growth? Whatever the cause, we can seek solutions in history.

In March of 1871, the newly formed Medical Society of the Third Judicial District of Oregon published its constitution in the Oregon Medical and Surgical Reporter. Article VI treats "Of the Differences Between Physicians":

"1. Diversity of opinion and opposition of interest, may, in the medical as in other professions, sometimes occasion controversy and even contention. Whenever such cases unfortunately occur, and cannot be immediately terminated, they should be referred to the arbitration of a sufficient number of physicians, or a court-medical, or, where both parties are members of the Medical Society of their county, to the Censors."

At their September meeting, the minutes of which were subsequently published in the Oregon Medical and Surgical Reporter in October, the group put its ethic into effect in what must have been a very spirited discussion:

"Dr. [Horace] Carpenter ... presented a case of gunshot wound, to which he had been called in consultation with Dr. [P.A.] Davis, in which the operation was delayed until the patient could be brought to a suitable place for treatment; stated that the delay was absolutely necessary, that no injury was received, and that the subsequent death was due to the extensive nature of the wound, not only freely lacerating the arm, but entering the chest. Reaction never took place from the first injury, and although a post mortem examination was not made, there was every appearance of serious internal complications. These remarks had been called up by some unprofessional remarks that were stated to have been made by some members of the Society, in reference to the physicians who had been first called to the scene of suffering. He could fully exonerate them of any want of judgment or attention, and he deemed it proper for the members of the Society to examine thoroughly any case of supposed improper action on the part of any of its number, and that, by so doing, we would find ourselves incited to more careful performance of our duties and more thoughtful regard for each other, while it would be an element of decided strength to the profession."

The formal minutes present an undoubtedly toned-down version of the discussion--which is only to be expected, given Section 2 of Article VI of the constitution:

"2. As peculiar reserve must be maintained by physicians towards the public, in regard to professional matters, and as there exist numerous points in medical ethics and etiquette through which the feelings of medical men may be painfully assailed in their intercourse with each other, and which cannot be understood or appreciated by general society, neither the subject matter of such differences nor the adjudication of the arbitrators should be made public, as publicity in a case of this nature may be personally injurious to the individual concerned, and can hardly fail to bring discredit on the Faculty."

A bevy of books relating to medicine in Oregon have recently landed in the History of Medicine Room. Some old, some new, some transferred, one blue (well, really more of a teal), they're sure to satisfy most tastes and interests:

Sheldon, Henry Davidson, 1874-1948.
History of University of Oregon / by Henry D. Sheldon.
Portland, Or., Binfords & Mort [c1940]
Putting our northern campus into the context of the growth and development in Eugene.

American Academy of Pediatrics. Committee for the Study of Child Health Services.
Child health services in Oregon : report of the American Academy of Pediatrics Study of Child Health Services in Oregon.
[S.l.] : Oregon State Board of Health, 1948.
"This study constitutes the first attempt on the part of practicing physicians to conduct a survey of this scope and magnitude. The physicians and dentists of Oregon cooperated wholeheartedly, and the pediatricians assumed leadership in obtaining their portion of the data required"--p. v.

Meeting the needs for nursing services in Oregon : a study of nursing resources, needs and educational facilities, 1948-1950.
[Portland, Ore. : Board of Directors, Oregon State Nurses' Association?], 1950.
Transferred from storage, this typescript report will receive better housing in PNW Archives.

Atwood, Kay.
An honorable history : 133 years of medical practice in Jackson County, Oregon / Kay Atwood.
Medford, Ore. : Jackson County Medical Society, 1985.
If only there were such a history written for every county in Oregon, with lists of practicing physicians, lovely illustrations, and ample references.

Pollock, Robert W.
The education of a country doctor / by Robert W. Pollock.
New York : Vantage Press, [c1978]
Written by a physician who practiced in eastern Oregon (and elsewhere), this book offers a bit of history, numerous colorful anecdotes, and advice on "How to Collect a Bad Debt" as well as other useful tips.

Dary, David.
Frontier medicine : from the Atlantic to the Pacific, 1492-1941 / David Dary.
New York : Alfred A. Knopf, 2008.
From Native American cures to medicine on the Oregon Trail to quacks and patent medicine, a nice overview--even if it does neglect to mention our fine institution.

Larsell, Olof, 1886-1964.
Morphological studies on the cerebellum. I. In Amblystoma. II. In chelonians and alligator / by O. Larsell.
[Portland, Or.] 1932.
Because one can never have enough Olof. This offprint from J Comp Neurol 56(2) was previously kicking around in the anatomy department at the University of Cambridge. Somehow, I think Olof probably had someone else wrassle the gators, although I'm sure he could have taken one himself.

Hoff, Clara S.
Gate on the hillside. [Poems].
[Portland Or., Sawtell, 1950]
Clara inscribed this copy to Adalbert Bettman, MD, who had provided her book with a preface. One of the poems is also dedicated to him, and another dedicated is to Ira Manville, MD. We decided to bring this one out of storage and into safer keeping.
Posted by Sara Piasecki at 8:41 AM No comments: 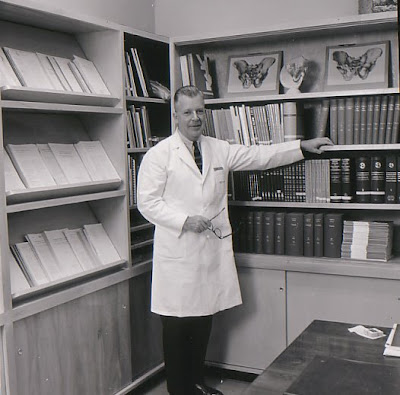 This weekend, the Oregonian ran a small obituary for Ralph C. Benson, M.D., who died in New Orleans on May 28, shortly after his 98th birthday.

Benson was born in 1911 in St. Louis, MO, and received his M.D. from Johns Hopkins School of Medicine in 1936. He interned at Hopkins and then moved on to the New York Lying-In Hospital for a residency in obstetrics and gynecology. After a year of private practice, Benson was called to serve with the US Navy from 1942-1947; upon discharge, he assumed a position as associate professor of OB/GYN at the University of California San Francisco Medical School. He joined the faculty at the University of Oregon Medical School in 1956, becoming the first full-time chairman of the Dept. of Obstetrics and Gynecology, succeeding Howard Stearns, M.D.

In 1961, Benson and his colleague Howard J. Tatum, M.D., were awarded a $517,000 training grant from the Public Health Service, which they used to create the broadest OB/GYN training program then in existence in the United States. Benson's national reputation served to draw trainees to Oregon, remembered Alfred Ono, M.D., in his oral history interview.

Benson's research interests included thyroid function, causes and prevention of abortion, female genital cancers, and gynecologic pathology. He was an honorary member of the International College of Surgeons, a director of the American Board of Obstetrics and Gynecology, and senior advisor to the National Board of Medical Examiners. Author of numerous publications, he was the co-author with Martin Pernoll of a Handbook of obstetrics & gynecology, which went through ten editions. In an oral history, colleague S. Gorham Babson, M.D., recalled his experience with Benson in writing the 1966 text Primer on prematurity and high-risk pregnancy:

ROSENWINKEL: Now, what I found most interesting was the various editions of the book you wrote on prematurity. When you published this in ’66, which was shortly after you became full time, it was called the Primer on Prematurity and High-risk Pregnancy, and then several editions—I think it was about five or six editions later, in 1986...

BABSON: No, the next one. The final one, the fifth, was published in 1986 with Dr. Pernoll, the lead writer.

ROSENWINKEL: The next one, yes. Well, you changed the title on the second edition; and then, in the eighties, it changed in its title to A Team Approach. So what I saw in that was an evolution from you and Dr. Ralph Benson, being two authors, to then a number of people collaborating on this book. So, how did the evolution of your book on prematurity parallel developments in the field of neonatology?

BABSON: That’s very interesting. Our first edition in 1966, Primer on Prematurity and High Risk Pregnancy, was a little simplistic. In 1970, we changed the name to indicate its perinatal coverage. Suddenly, we were aware of the entry into the perinatal age, with Diagnosis and Management of the Fetus and Neonate at Risk: A Guide for Team Care for our title in 1970. It was the first book on perinatal medicine, believe it or not.

ROSENWINKEL: Nationwide? Well, that’s a tribute to both of you.

BABSON: Yes. And interestingly enough, it went through five editions and was translated into four languages, which pleased me. My partner, Ralph Benson, was an able writer with better use of the English language than I.

Benson retired as chair emeritus from OHSU in 1976, and was succeeded by Leon Speroff, M.D.
Posted by Sara Piasecki at 11:57 AM No comments: