Our Historical Image Collection was completely categorized for the first time in early 2000. During filing, unidentifiable images were sorted into people, places, and subjects and left to sit in folders labeled "Unidentified".

Since 2000, the miracle of high-resolution scanning has come to our desktops and allowed us to obtain valuable new clues about some of the photographs.

One such tantalizing puzzle is the image here, of an unnamed physician bending over his male patient, stethoscope employed for the physical exam. The room houses a few pieces of furniture, including two cabinets cluttered with medical paraphernalia. The walls are decorated with documents. Could a 1200 dpi scan of this print reveal any new information about our mystery doctor?

Sadly, scans are only as good as the original photograph, and this print only yielded a few more clues--and no definitive answers. The calendar on the wall was courtesy of the "Commercial Club of Dallas, Polk County, Oregon, 'The Prune City'", but the year is too blurry to make out with certainty (or, I'm old and blind. It could be that.)

There is also a broadside for the United War Work Campaign, a map of Polk County, OR, and a certificate opening with the words "The President of the United States ..." (name of awardee illegible, alas). The War Work Campaign was begun in 1918, so the photo cannot have been taken earlier than that, but the wall calendar shows August 1 as a Friday. In 1918, August began on Thursday. So we have a tentative date of August 1919 and a potential location of Dallas, OR.

Our collection of directories from the Oregon Board of Medical Examiners only goes back to 1931, and this licensee looks like he might not have made it another 12 years.

Below is a 300 dpi scan of the photo. If anyone has further information on the identity of this physician, we'd love to hear from you. 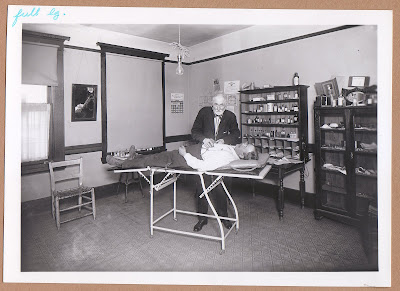 Posted by Sara Piasecki at 12:23 PM No comments:

An article in this month's issue of Academic Medicine (2008, 83:1162-1164) addresses the place of history of medicine classes in the medical curriculum and makes the argument that the study of history is a vital component of the education of young physicians. (Abstract free)

The piece by Daniel K. Sokol, "Should We Amputate Medical History?", is described in the abstract as a "cri de coeur"--and indeed it is, with the author suggesting cuts to his own area of specialty, medical ethics, to make room for history of medicine in class.

One example given by Sokol is of Semmelweis: "Indeed one cannot fail to be inspired by the astuteness of Ignaz Semmelweis, who in the mid-19th century discovered that unhygienic medical students were responsible for the high mortality rates in the maternity clinic and implemented hand washing before deliveries..."

Is the ethical lesson here that the physician should strive to improve patient care? Or is it that Semmelweis was subsequently hounded out of medicine by his contemporaries and left to die in an insane asylum? Either or both, it is a story well worth remembering.

In a similar vein, the life of Charles Thomas Jackson could profitably be used as a case study in medical ethics. A new biography of Jackson, available on this week's new book shelf at the OHSU Main Library, has been called "the first complete defense of this neglected scientist," "one of the most remarkable and maligned figures in the history of American science and medicine." A master at claiming prior discovery, Jackson promoted himself as developer of surgical anesthesia, inventor of the telegraph, and discoverer of copper deposits at Lake Superior. Like Semmelweis, the conflicts he engendered left Jackson mentally unhinged, and he died in an asylum in 1873.

The actions of men like Semmelweis and Jackson, and the reactions of their colleagues, provide cautionary tales for physicians young and old, in any era, who might seek to advance the principles and practice of medicine. Physician, read about thyself!
Posted by Sara Piasecki at 1:36 PM No comments:

The progressive physician and the medical school library

Who realized that the records of a library could reveal so much about the culture of a medical community? Not us--until we started processing the collection, that is. We knew that the first Librarian of the University of Oregon Medical School, Bertha Hallam, was a respected and valued member of the Portland medical community, as evidenced by her correspondence with various physicians. But the culture of medicine and the work of library are woven together in documents like one titled "The progressive physician and the medical school library," dated October 1, 1968.

Under discussion is a resolution by the Multnomah County Medical Society calling for the Oregon Medical Association to increase its support of the University of Oregon Medical School Library, the only health sciences library in the state (interesting that MCMS would call on another organization to do this, rather than resolve to increase its own support, but there you have it).

Herein, we find--among other things--that King County Medical Society in Washington was then assessing individual members $15 annually for library support, while the Spokane Medical Society assessment was up to $27.50 per year. MCMS is suggesting $3-5 per physician. Of course, the four-page document lays out several reasons why other physicians think this is too much.

Library services in support of continuing medical education are then outlined, and specific improvements to the UOMS Library are listed. Here's where we find the truly amazing statement that "Parking problems have been solved."

What??!! In all our years reading through documents, listening to oral histories, and thumbing through photographs of OHSU history, never, NEVER, have we encountered any claim by any individual or unit that parking was good, or even adequate, let alone solved! Truly, our predecessors humble us with their skill and power. 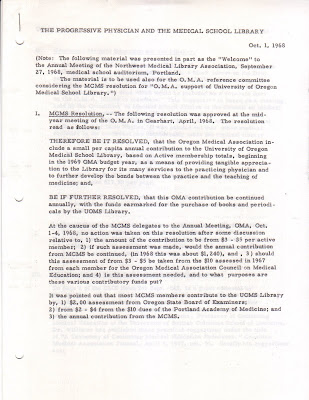 (Lest anyone question why we're spending valuable processing time--of any level-- on the library records, let us assure you that it really is necessary, since they have come to the archives, and continue to come to the archives, in complete and total disarray, making it impossible to locate any specific, requested information without rooting through every box.)
Posted by Sara Piasecki at 3:06 PM 1 comment:

OHSU Library and Historical Collections & Archives will be closed today due to inclement weather. We apologize for any inconvenience.
Posted by Sara Piasecki at 7:53 AM No comments: