As many of you are probably aware, this year marks the sesquicentennial of the publication of Gray's Anatomy, one of the seminal texts in anatomy. Its importance to medical education in America can be (literally) measured by glancing at our shelves here at the OHSU Library, where we have something like 30 editions and derivative works (that's a LOT, for those not familiar with the library's collecting habits).

An exhibit on display this month at the Royal College of Surgeons of England, highlighted recently by Street Anatomy, is focusing not on author Gray but on illustrator Henry Vandyke Carter. This is at it should be, since most everyone who has glanced at an anatomy text can agree that the illustrations hold the key to its success.

Here in Oregon, there was for many years but one medical illustrator: Clarice Ashworth Francone. I highlighted the collection of her papers which we hold here in the Archives back in September of 2007 when a catalog record was created from the finding aid. An exhibit of her work was also mounted by the library in the winter of 2002, shedding light on her crucial role in collaborations with faculty members such as Stanley Jacob, MD, and William Howard, DMD. Francone's drawings helped generations of students master Structure and Function in Man and the principles of operative dentistry, among other topics.

But the human body was not her only muse: she found beauty in buildings, and created this iconic image of the university's Mackenzie Hall (formerly called the Medical Science Building). 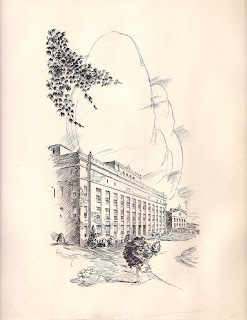 Those clouds! Is it just me, or do they resemble some diseased body organ...?
Posted by Sara Piasecki at 11:14 AM No comments:

Deans Past and Really Past

We received from University News & Publications this week a very large box containing all the news and image files for the past presidents and deans, back to the first president (Lewis Bluemle) and including all deans of the "modern era" (Terkla, Van Hassel and Turner from Dentistry; Kendall, Benson, Bloom, Cassel from Medicine; Lindeman and Potempa from Nursing).

I'm eager to see what the files hold, having noticed already folders labeled "speeches" and having peeked at the photos of Terkla (such a sharp dresser, that man). In these materials, researchers will be able to track high-level changes in mission, outlook, and initiatives from the consolidation of the schools into a university in 1974. And, now that we've pulled some of the older dean's office records from the Subject Files (per yesterday's post), we'll also be able to compare and contrast the deans of yesteryear with the deans of just-a-little-while-ago.

To get that project jumpstarted, I felt compelled to leaf through one of the Subject File folders marked "Dean's Correspondence, 1911-1925." A characteristic mix of the lofty and the prosaic: letters from Assistant Dean Dillehunt to Dean Mackenzie voicing concerns about the impending merger with Willamette University Medical Department (1913); petition from the associated students of UOMS to the Dean seeking support for their recognition as an official Students' Army Training Corps group (1917); letter from the Dean to Abraham Flexner explaining the funding constraints for the medical school (1925); and a memo from the City of Portland's Chief Electrical Inspector, E.F. Dunlap, explaining to a Dr. W.H. Norton that the medical school building at 23rd and Lovejoy "is in a very hazardous condition," with "lighting cords that are now tied in knots or twisted around pipes, etc." and declaring that "wiring must be done at once" to "make same safe"--dated 1914. Ironic, therefore, that the place burned to the ground in 1919, presumably after these improvements had been made.

Ah, heavy hangs the head that wears the crown. Through primary source materials such as these, we can show that most deans were no jeremiahs: most of their headaches were far from imagined.
Posted by Sara Piasecki at 3:07 PM No comments:

Well, I don't mind admitting that I am worn out. I have looked through, shifted, and assessed every folder within the Subject Files in the past two days, and hauled a dozen boxes down from storage for archival processing.

For some time, we've been aware that there was a great deal of material in the Subject Files that is more properly archival in nature. In much the same way that we removed all archival materials from the PNW Archives Collection a few years back, these small collections-within-a-collection will be accessioned into the archives as separate groups. Deselected in the overhaul of the Subject Files are materials which include:
and other materials, along with some publications which should really be cataloged. House cleaning always feels good when it's done--it's the doing that can be a bit of a drag.

For a little relaxation, I flipped through one of the publications I came across: Henry Sigerist's Medical History in the Medical Schools of the United States to see where UOMS ranked in 1939. I was a little surprised to find that in 1939 (which incidentally was the year in which the university's first library building was erected), third-year medical students at UOMS were required to take an 11-hour course on the history of medicine and an additional 4 or 5 hours of history of anatomy instruction. An elective class on the history of physiology, also 11 hours, was available to any student who had completed the required physiology course. Under the section labeled "Various", Sigerist notes: "Problem not solved; plans are nebulous; inadequate library facilities, crowded curriculum and so forth, make a well organized course in medical history difficult."

And so the wheel turns and nothing is new under the sun...
Posted by Sara Piasecki at 2:48 PM No comments:

Storage gems of the week

In this week's session of looking through materials at offsite storage, I came across two little gems.

The first is a fascinating little study titled End of the Oregon Trail: suicides: 1894 through 1974 by UOMS faculty members Jim Shore, MD, and Betty Arvidson, PhD. Although the first reported episode of self-injury in the Pacific Northwest was recorded by Lewis & Clark on October 5-6, 1805, the first written record of suicide in the area dates from 1894. Interestingly, the study found that the suicide rate in Multnomah County, OR, declined from 37 per 100,000 in the 1890s to 14 per 100,000 in the 1960s. While most suicides were Caucasians, there was apparently an "epidemic" of suicide among the Chinese population of the county in the first part of the 20th century; Shore and Arvidson postulate that some of these so-called "suicides" were in fact murders perpetrated during the "Tong Wars." This study of suicide in the Portland area has now been relocated to the PNW Archives Collection.

Below is a photograph which had been tucked inside one of the books in the H's. I'm not aware of any "lost souls"-type websites for pet photos, such as there are for photos of people, but someone out there might recognize these two playful puppies: 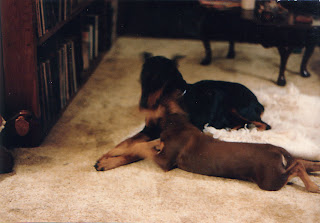 End of an era: Jim Morgan has left the building 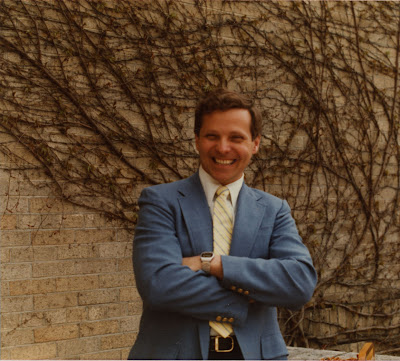 Today is officially the last day for Library Director James E. Morgan, third director in the history of the OHSU Library, who faithfully served this institution from 1976 to 2008.

Jim will best be remembered for his equanimity, his gentleness, and his almost pathological inability to remember peoples' names (seriously, Schnicklepuss isn't even CLOSE to Piasecki). 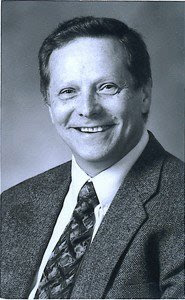 Posted by Sara Piasecki at 2:05 PM No comments: