A reminder that our next OHSU History of Medicine Society Lecture will take place at noon today in the OHSU Old Library Auditorium. Author and OHSU alum Tom Hager will present his talk, "The Gorgon's Blood: a Greek Myth, a German Doctor, and the Rise of MRSA."

Tom Hager has written or edited five books on science and medicine. His most recent is The Demon under the Microscope: From Battlefield Hospitals to Nazi Labs, One Doctor's Heroic Search for the World's First Miracle Drug (2006,). Hager started writing after earning a master's degree in medical microbiology and immunology from OHSU, then a second in science journalism from the University of Oregon. In 1983 he became founding editor of LC Magazine, a trade publication for scientists. He has spoken widely, to groups ranging from AAAS and the National Institute of Standards and Technology, to media including C-Span's "BookTV" and National Public Radio's "Weekend Edition," "Science Friday," and "Tech Nation." Hager's other books include Aging Well (1990); Force of Nature: The Life of Linus Pauling (1995); Linus Pauling and the Chemistry of Life (1998); and Linus Pauling: Scientist and Peacemaker (2001). His next book, Out of Thin Air, will be available next fall.

For more information on Hager, check out his web site.
Posted by Sara Piasecki at 7:01 AM No comments:

Following on the success of our first run of historic postcards showcasing photographs from the Historical Image Collection, a second series of images is now available!

There are twelve images in total, sold individually and in sets of six (women physicians and general OHSU images). 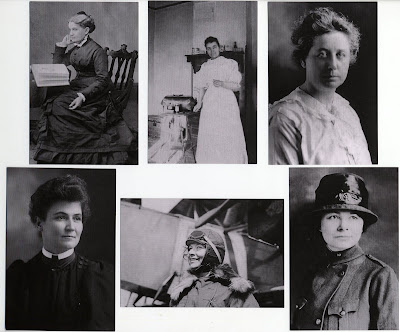 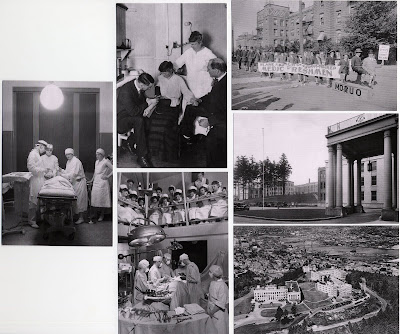 Posted by Sara Piasecki at 12:31 PM No comments: 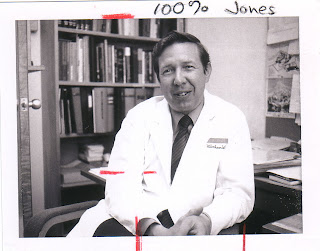 [Note: this post was revised on Feb. 4 per comments sent to me by Neil Jones.--Sara]

The Science section of this morning's Oregonian newspaper carried a notice of the January 23 university media release announcing the renaming of the Basic Science Building to Richard T. Jones Hall. (Another update to the campus buildings names list!)

The OHSU announcement recounts many of Dr. Jones' achievements and contributions to the medical school and the university as a whole. What it leaves out is that Dick Jones is part of a long and distinguished line of University of Oregon Medical School graduates and faculty, including his father Lester T. Jones, M.D. (1894-1983), a prominent ophthalmologist; his uncle Arthur C. Jones, M.D. (1896-1983), who was an expert in rehabilitation medicine; his brother Warren L. Jones, M.D. (1924-2007), a psychiatrist; and his son Gary R. Jones, M.D., a pediatric oncologist. Dr. Richard Beam, M.D., Dick's nephew, also graduated from OHSU (Class of 1984). 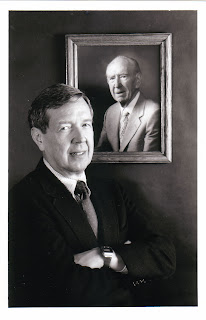 With such a pedigree, Drs. Dick and Gary Jones were natural candidates for the OHSU Oral History Program; tapes and transcripts of their interviews (Dick, Gary) are available in the Main Library as well as Historical Collections & Archives. Dr. Dick Jones has also been a supporter of the collections here, and has donated items including a sketch of former Biochemistry chair Ed West, Ph.D. drawn by Charles Dotter, M.D.

This is the second time in the history of the university that a building has been named (or renamed) for a living person, after the 2006 naming of the Peter O. Kohler Pavilion.

(Images of Dick Jones during his tenure as Chair of Biochemistry, and in 1987 with portrait of Dr. Lester T. Jones)
Posted by Sara Piasecki at 12:21 PM No comments:

On January 18, OHSU chief medical resident Madison Macht, M.D., delivered the OHSU History of Medicine Society Lecture "Large and noble lines: the life of Howard P. Lewis, M.D." For those who were unable to attend the presentation in person, the streaming video of the talk is now available on the lecture series web site.

Lewis, chair of medicine at the University of Oregon Medical School from 1947 to 1972, was a legendary diagnostician who expected his students to not only perform but to master techniques such as jumping percussion. A 1950s-era pamphlet from the Pacific Northwest Archives, On becoming a ward clerk, provides evidence that Lewis' techniques were practiced almost exclusively in the Medical School hospitals and clinics:

"The conduct and report of the history and physical examination should conform to the manner and standards outlined in the manual, "THE HISTORY AND PHYSICAL EXAMINATION", and should be comprehensive. It is strongly recommended that the manual be used at the bedside until its contents become so familiar that this practice is unnecessary."

Familiarity with the contents and ability to perform the techniques outlined therein were not necessarily the same thing, however. In that gap lies the art of medicine.
Posted by Sara Piasecki at 12:06 PM No comments:

Nursing history in the making

Just added to the Pacific Northwest Archives Collection is the DVD Working Together for Healthy Communities, a production of the Oregon Consortium for Nursing Education (OCNE).

The video examines OCNE's impact on nursing education in Oregon. According to its website, "OCNE is a partnership of community colleges and public and private university schools of nursing established in response to the critical nursing shortage and the 2001 Strategic Plan promulgated by the Oregon Nursing Leadership Council. OCNE is one mechanism by which Oregon nursing programs can dramatically expand their capacity and enrollment, and prepare graduates of these programs with the competencies to address the rapidly changing health care needs of Oregon's aging and ethnically diverse populations."

OCNE staff have already received inquiries from around the country about this innovative program, the development process, problems encountered and successes achieved. Historical Collections & Archives is proud to announce that we will be receiving a collection of OCNE records, including meeting minutes, drafts of proposals, and other documents illustrating the evolution of the consortium.
Posted by Sara Piasecki at 12:55 PM No comments: