A Look at the Present and the Past 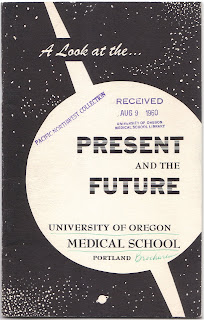 There's no denying that OHSU has been much in the local news lately, as ramifications of the ruling on the tort cap are made public. In times like these, I find it profitable to look at records of the past to attain some historical perspective.

What struck me today was this little pamphlet from December of 1957, just a shade more than 50 years ago, which was produced by the Research Committee and the Dean's Office of the University of Oregon Medical School in order to promote expansion efforts.

The jazzy cover captures the excitement and potential of the new space age; I love the way that cover image contrasts with the "sphere of influence" diagram: it looks like it's raining across Oregon, Idaho, and parts of Montana. (New state motto? "Oregon: we've got enough rain for three states!") 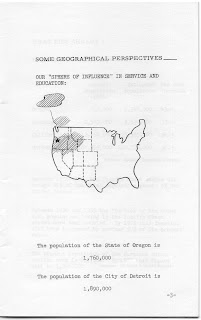 But the numbers presented along with the charts are telling:

And, we are told, the state population was expected to increase 43% by 1975 while industry diversified, leading to an increased demand--and increased support--for "the research, education and service functions" of the University. Recognizing this trend, the State Board of Higher Education had just "adopted the new policy of increasing the service and educational potential through the creation of a core of full-time faculty members in each of the clinical departments."

As the brochure dryly notes: "This decision had unforeseen secondary effects. GOOD FACULTY MEMBERS ARE ALSO INVESTIGATORS." So, the University began to run out of research space. The idea, supported by the argument presented here, was to increase the size of the facilities at UOMS to achieve a research population of 461 by 1967 and a research population density of 148 sq. ft. per investigator.

So we see that even in 1957, research was driving clinical innovation and more and more clinicians were conducting research and space was becoming an issue. Today, as we look at the NIH grant rankings and consider the enormous amount of clinical care still being conducted on this tiny parcel of land atop this Hill, we can see how a major event such as the loss of the tort cap sends ripples throughout the entire enterprise.

Just last week, a longtime faculty member was telling a group of listeners that Dean David Baird and the 45 or so full-time faculty on staff here at UOMS in the 1950s and early 1960s had decided that if they could not compete with the big medical schools in grants and research--and it seemed clear to them that they could not compete, with a state the size of the city of Detroit to support them--if they could not compete in research, they would become the best in clinical care. The Best. And for a time, they may very well have achieved that goal, with Howard P. Lewis in Medicine and J.E. Dunphy in Surgery molding a culture of caring that was nationally recognized.

Well, we have begun to compete with the big schools in research, and we still strive for clinical excellence (both of which then feed into the educational mission). The loss of the tort cap, representing indirect state support to the tune of about $30 million per year, represents a significant change in the university's fiscal landscape.
Posted by Sara Piasecki at 1:53 PM No comments:

Notable women in the history of Oregon

[Glad to be back after a bout of illness. Modern medicine, we learn the hard way, is of no use for about 90 percent of what plagues mankind.]

Several new additions to the Pacific Northwest Archives Collection have come in from cataloging, including Notable Women in the History of Oregon, a 12-page pamphlet from the Oregon Lung Association. Published circa 1983 and sold for a dollar, the pamphlet celebrates female movers and shakers in Art, Business, Community Service, Education, Law, Medicine/Science, and Politics, with a special nod to Saidie Orr Dunbar, first secretary of the OLA and "an outstanding humanitarian of her generation."

Not surprisingly (in our view), the short list of notable women in Medicine/Science includes Esther Pohl Lovejoy, M.D., 1894 graduate of the University of Oregon Medical School, physician, suffragist, and pioneer in international health efforts. Also recognized is Bethenia Owens-Adair, M.D., a controversial figure in Oregon medicine who lobbied successfully for the passage of legislation requiring sterilization of "the habitually criminal and feeble-minded."

The third and last named notable in the category is Grace Phelps, R.N. "One of Indiana's earliest registered nurses," Phelps was very active in nursing certification and education in Oregon and worked to establish the Dept. of Nursing Education at the University of Oregon Medical School (the forerunner of today's OHSU School of Nursing). She also founded the Oregon State Association of Graduate Nurses, serving as its president and on its board of directors. She is probably best known as the first Superintendent of the Doernbecher Memorial Hospital for Children, a position she held for seventeen years after the hospital's inception in 1926. Earlier in her career, she had served as Supervisor of Nurses at Multnomah County Hospital; Superintendent of the Portland Eye, Ear, Nose, and Throat Hospital; and as chief of nurses of Base Hospital 46 during World War I.

Produced in 1983, this pamphlet from the Oregon Lung Association postdated the final closure of the University State Tuberculosis Hospital by ten years. The fact that none of the three notable women in science and medicine were connected with any of the state's tuberculosis hospitals is telling: telling both that men physicians were the pioneers in tuberculosis treatment in Oregon (such as the Matson brothers, certainly), and telling that women who did spend their careers caring for tuberculosis patients, such as Barbara Hiatt Jacob, twenty-year superintendent of nurses at the TB Hospital, did not merit a mention.

Some parties at OHSU are currently engaged in a similar exercise, to identify and nominate a local legend for inclusion in the National Library of Medicine site celebrating America's women physicians. Working through that process has given me a new appreciation for the compilation of these lists of notables and the enormous amount of research, thought, and emotion that underlies the final product.

In many ways, the lists say more about the listers than those listed.
Posted by Sara Piasecki at 8:23 AM 1 comment: