Selling, a Portland native, received his undergraduate education at Yale University and graduated from Johns Hopkins Medical School in 1908. Returning to Portland, he joined the faculty at UOMS and began a private practice. In 1921, he and three other colleagues joined together to establish the Portland Clinic. He served as chair of Medicine at UOMS from 1926 to 1947, and held a dual appointment as chair of the Division of Neurology from 1940 to 1947. In World War I, he served with distinction as neurologist for Base Hospital 46 and achieved the rank of major.

The collection received today includes various certificates, awards, and honors, as well as a few pieces of correspondence. Also included are the exams, handouts and lecture notes from the neurology course taught at UOMS by Selling in 1947, and several boxes of glass lantern slides that he used in his presentations.

In its new home here in Historical Collections & Archives, this collection will join other materials associated with Selling: patient records of the first 100 cases treated by Selling (Laurence Selling Records, Accession No. 2004-017); several artifacts previously owned by Selling (including his percussion hammers, spinal tap needles, spinal manometer, and other pieces); a couple of books donated by Selling for the History of Medicine Collection; and, of course, photographs (a handful of which have been digitized).

A nice Christmas gift for researchers! Happy holidays to all--I'll be back on Boxing Day.
Posted by Sara Piasecki at 2:34 PM No comments: Links to this post

Image of the day 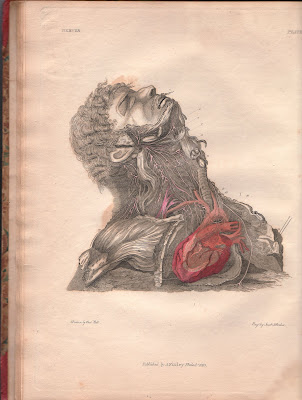 I definitely think this qualifies as an arresting image, since it stopped me in my tracks as I flipped through the pages of the book, Sir Charles Bell's A series of engravings, explaining the course of the nerves (1818). An 1811 publication of Bell's, Idea of a new anatomy of the brain, is widely considered to be one of the landmark works in neurology.
Posted by Sara Piasecki at 9:49 AM No comments: Links to this post 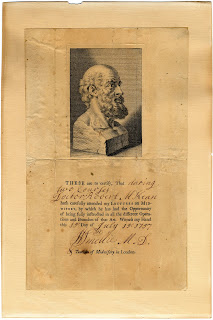 It doesn't actually smell like anything in particular, but this 1757 certificate awarded to Doctor Robert McKean upon completion of two courses taught by William Smellie is one of the more unexpected items in our collections. The certificate itself measures 31.5 x 19.5 cm, and is mounted on a board 38 x 25 cm. While many certificates from this period do survive, testaments to the authority of the graduate to practice medicine, the large format and illustrated nature of this certificate appear to make it somewhat unusual.
Posted by Sara Piasecki at 3:35 PM 3 comments: Links to this post

I read with sadness yesterday news of the death of Dr. Katsumi James Nakadate, M.D., in the obituaries section of The Oregonian (notice online here).

Born in Portland in 1914, Dr. Nakadate graduated from the University of Oregon Medical School in 1939. He entered active duty with the U.S. Army in 1942, training with the 442nd Regimental Combat Team; he also served with the 17th Airborne and the 82nd Airborne, the latter during the occupation of Berlin. While in Berlin in 1945, he wrote to the Oregon State Medical Society, in response to their request for a copy of his Bronze Star citation:

I carry now (inoperable) two pieces of metal -- souvenirs from the Germans and three clusters on my purple heart - doing occupation duty here in Berlin - sick call for civilian war criminals for whom I have very little sympathy - included among the prisoners are some doctors --!

The citation had been given "for heroic and meritorious action against the enemy near Hussmansdorf, Germany, on March 24, 1945" during a glider-borne maneuver. Wounded by flak, Captain Nakadate administered first aid to the men in his unit "working tirelessly throughout the entire day." The citation notes that "his devotion to duty while experiencing extreme pain was an inspiration to all men of his command." One wonders whether it was the memory of this experience that led Nakadate to choose a residency in anesthesiology after the war.

In July 2000, Dr. Nakadate sat for an oral history interview with Tadaaki Hiruki, M.D., and shared his memories of growing up in Portland, his experiences as a Japanese American during the war years, and his long career in anesthesiology at St. Vincent Hospital and the Portland Veterans Administration Medical Center. Recalling December 7, 1941, and the attack on Pearl Harbor, Nakadate said:

In that time we had Pearl Harbor in 1941, and I remember this very distinctly. I was in my second year of internal medicine, and Pearl Harbor was Sunday. Monday morning I went to go to work in the hospital, and they told me, “There’s a couple of people in the director’s office to see you, and you are supposed to go there.” And I go there, and who do you suppose it was? It was the FBI. Well, they were the ones checking Japanese Americans in that area, in the Detroit area. And they said, “We know all about you, Doctor, because we have a man here that’s in our service that was a Boy Scout, an Eagle Scout, with you in Portland, Oregon, in your same troop.” And they—the outfit is the federal—you probably know what it is. It’s the one that checks for problems here in the United States. They said, “We know all about you, so you don’t have anything to worry about. We just wanted to let you know that you’re okay.” And this fellow by the name of Kirby, Jim Kirby, was a fellow Eagle Scout in Troop 66 in Portland, Oregon, in the years, I would say, 1928 through 1931. A fellow Eagle Scout.

HIRUKI: So he vouched for you?

NAKADATE: He vouched for me before the group knew anything about me. He vouched for me. And so several times I went out and ate with the federal people, and they all knew I was just another fellow citizen. That was very interesting.

To hear more of Nakadate's story, check out his oral history interview, available in the OHSU Main Library.
Posted by Sara Piasecki at 8:02 AM 1 comment: Links to this post