While immoderate quantities of caffeine downed quickly might cause a coffee crash, that's not the sort of thing under discussion today.

Yesterday, I had occasion to look through the Biographical File of one John Vidalis Straumfjord, M.D., past president of the North Pacific Society of Internal Medicine and founder of the Astoria Clinic in Astoria, OR. A 1929 graduate of the University of Oregon Medical School, Straumfjord gained national recognition in the 1940s for his research on Vitamin A. All in all, a very interesting character; but the thing that struck me most when reading through an obituary notice about him was that he was a survivor of the 1933 plane crash that killed Robert C. Coffey, M.D., another important figure in Pacific Northwest medicine. Straumfjord had been working as an internist at the Coffey Clinic since 1930, and was on the plane with Coffey when the accident occurred.

In Elizabeth Winegar Molina's book, Doctor Gritman's hospital: from horse and buggy to helipad, we get a brief biography of Coffey, co-founder with Charles L. Gritman, M.D., of the hospital in Moscow, Idaho. Born in North Carolina in 1869, Coffey relocated to Idaho with his family in 1888. Exhibiting a wanderlust which was somewhat atypical for his time, Coffey headed back east to Kentucky to get his medical degree; he graduated in the 1892 class of the Kentucky School of Medicine at Louisville. After five years in practice with Gritman back in Idaho, Coffey moved again -- this time to Colfax, WA. He was there only three years before relocating to Portland in 1900. A vignette from Molina's work offers some clues to his peripatetic ways:

Moving to Portland, Oregon, in 1900, he continued his experimental work on dogs. Employing an assistant, anesthetist, and artist, he worked three days a week in a laboratory he had outfitted with a complete set of instruments and sterilizer. An out-of-town doctor, allowed to use the lab while Coffey was lecturing in Europe, disregarded instructions to the contrary, and published his work in a local newspaper. The Humane Society sprung into action and closed the lab; but Coffey quietly continued his experiments in the basement of the Medical School.

We have a lot of evidence which seems to show a high tolerance for "innovation" in the early years of the Medical School here, and I suspect that Coffey's retreat to the basement was just another instance of UOMS giving shelter to what it saw as a "creative mind." Perhaps that support system contributed to Coffey's settling; he practiced here in Portland for the next 33 years of his life.

Coffey went on to establish the Coffey Clinic in Portland, and to pioneer several abdominal surgical techniques. Molina reports that "Dr. W.J. Mayo of the Rochester Clinic rated Dr. Coffey 'one of the six great surgeons of his time.'"
Posted by Sara Piasecki at 2:08 PM No comments: 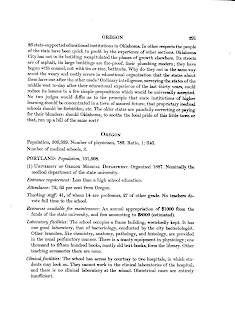 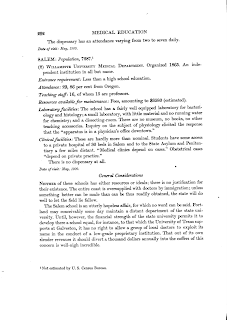 We've blogged before about the Flexner report, the 1910 assessment of medical schools in the United States and Canada delivered to the Carnegie Foundation for the Advancement of Teaching, and shared the results for the University of Oregon Medical School (A) and the Willamette University Medical Department (C). But what did Flexner have to say about UOMS and WUMD? Did he lavish UOMS with praise, while chastising WUMD for lax oversight of underdeveloped programs? As it so happens, he slammed both institutions -- as he did with most. Since the Flexner report, the original and later reprints, are all of such antiquity that they have been relegated to offsite storage, I here reproduce the text for ease of citation (this from the 1912 publication). Click on the images to enlarge.
Posted by Sara Piasecki at 1:26 PM No comments:

I recently had a conversation with a colleague about collecting multiple copies of similar images -- how many were too many; was there such a thing as too many; what constitutes similar, et cetera. I mentioned that here in the Historical Image Collection, we do often have multiples of the exact same image, same format, same print size, even. Typically, we keep any instance of an image that contains additional (or different) information about the image content, its use, or its provenance. So, we're always eager to see donations of photos, even if we think we may have some of them already, because it means we may get new information about the picture itself.

Take, for example, the photo below. We have a copy of this already in the HIC, and although it has no information on the back of the print, we know that these gentlemen are Dean David Baird (left) and Dr. Howard P. Lewis (right), both towering figures in the history of the Medical School during the first and middle parts of the 20th century. We recently received a second copy of this exact photo from University News & Publications. Copy 2 brought with it information that radically altered the way I -- or anyone else -- might look at and interpret this photo. On the back, written in pencil, is the small notation:

The 46th General was the all-volunteer unit based out of the University of Oregon Medical School which operated overseas, in Africa and Europe, during World War II. The photo notation took this image from one of two faculty members chatting in the Library foyer, to one of two men realizing that the war had finally come to Oregon. Even though I had seen this picture before, I saw Copy 2 with new eyes. 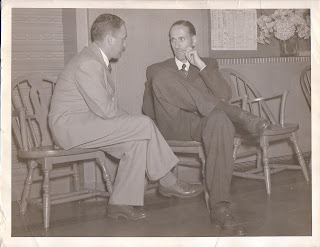 Posted by Sara Piasecki at 2:28 PM No comments:

A real benefit to having so many photographs of objects in our Medical Museum Collection available online is that we are contacted by people who know more about the items than we do -- and we are able to feed their expertise back into our collections.

Take for example item 77-35.1.5, donated long ago by physician E.H. McLean. Back in 1977 when it was accessioned, no one on staff here spoke or read Japanese. We accessioned it as a drug kit -- which certainly seems plausible, given the little vials and the spoon. Thirty years later, we still don't have anyone on staff who can read Japanese, but a helpful web searcher in the UK let us know that it is, in fact, a water purification kit. There don't appear to be many resources out there to aid in the identification of Japanese medical supplies and equipment from World War II -- at least not resources in English. Many thanks to our sharp-eyed British friend, and to any virtual experts (professional or amateur) who might be willing and able to help gather information about these pieces. We have over twenty collections of World War II-era Japanese medical items, so keep the suggestions coming!
Posted by Sara Piasecki at 11:56 AM No comments: 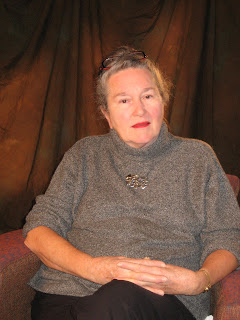 We have now successfully recorded our 100th oral history interview!

And while we won't have an edited transcript of last Friday's interview with Dr. Frances Storrs available in the Main Library for several months, here are a few teasers to build anticipation in the meantime:
As with the ninety-nine other interviews recorded for the OHSU Oral History Program, the transcript and tapes of the Storrs interview will be indexed, abstracted, and made available for circulation through the Main Library. You can browse a full list of interviews currently available by searching on OHSU Oral History in the library catalog. A complete Master Index of all processed interviews is also available on our web site.
Posted by Sara Piasecki at 9:00 AM No comments: