Public health in the Pacific Northwest

Yesterday, our fantastic and forbearing student helper completed an initial inventory of the Public Health Survey Records, Accession No. 2004-025.

The scope and content and arrangement information from the finding aid give an overview of the collection's contents:

These are Public Health Surveys of small Northwest towns, mostly around 1932. Two reports indicate that they are requirements of the course in Public Health with Dr. H.J. Sears. The bulk of the subjects are smaller Oregon towns near Portland and Salem, but a good portion discusses towns in Southern Washington. There are also three surveys of Central Oregon counties, three surveys of Idaho towns, one town and one territory in Alaska, and one town in Montana. Nearly all of the surveys have a similar table of contents or are divided up into these headings:

The surveys are arranged by state, Oregon in the first three boxes, Washington takes up all of the fourth box and the first part of the fifth. Alaska, Idaho and Montana take up the rest of the fifth box. Inside each state the towns are in alphabetical order. When there is more than one survey of a town, the surveys are arranged by date. The county surveys follow the towns.

But the really fun stuff is listed in the detailed description, where we find the unusual, outstanding, or otherwise remarkable individual items, such as:

While the inventory remains incomplete, we're happy to answer any queries about contents before the complete guide goes online.
Posted by Sara Piasecki at 9:42 AM 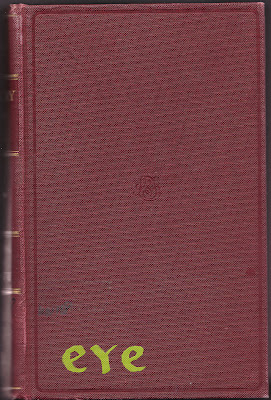 Hot on the heels of yesterday's blog post "Eye hook," here's another captivating cover with a much more literal eye hook! This great item came along with the Kenneth Carl Swan Papers, one of a handful of books delivered with his artifacts, personal papers, and photographic materials. This book has been used and loved: besides the catchy front label (part of a simple classification scheme?), it has the stamps of the Casey Eye Institute and the University of Oregon Medical School Department of Ophthalmology, and the bookplate of the "Kenneth Swan Library CEI," from which we learn that the book was "Contributed by Milton B. Steiner, M.D." (a mid-20th century Portland ophthalmologist).

As a special bonus, I got to scan this image on the new-to-me little Canon scanner now under my personal control. It's a very low-end (can you tell?) letter-sized flatbed scanner from the late 1990s, but it's always nice to get new toys.

Oh, so you want to know what the text is? It's the second edition of Torok and Grout's Surgery of the eye, published in Philadelphia by Lea & Febiger in 1925.
Posted by Sara Piasecki at 1:54 PM 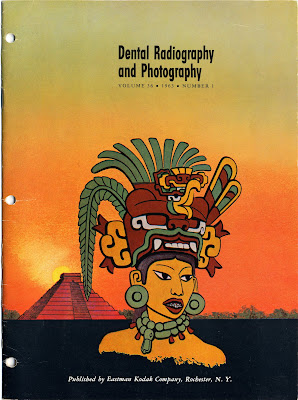 The cover made me look (see the braces on the Mayan Indian?), but the contents were the real find: the inside cover of this 1963 issue of Dental radiography and photography has an obituary of "Pioneer radiodontist" Henry Cline Fixott, Sr., D.D.S. Tucked inside the journal was a manuscript memo from Art Watson to H.C. Fixott, Jr., calling his attention to the article.

Fixott, Sr., was a 1906 graduate of the North Pacific College of Oregon (now our own School of Dentistry) and a longtime Portland practitioner. He began to specialize in radiodontia after reading the work of Edmund Kells, and soon established a course in radiodontia at the Dental School. He was one of the founders and the first president of the American Academy of Oral Roentgenology. Fixott, Sr., died in 1959 at the age of 80 (and we think the lag time between acceptance and publication is long these days! That's four years to get an obituary in.)

This journal issue and many others, along with issues of Medical radiography and photography, many glass lantern slides, copper plates, and radiographs, were previously owned by Dr. Douglas Barnett, an alumnus of the OHSU SoD and past chair of oral radiology here. Dr. J. Henry Clarke, OHSU emeritus professor of dentistry and dental historian, shepherded the materials into our care, and so provided us with some fantastic resources on early dental radiology.
Posted by Sara Piasecki at 12:28 PM

As I mentioned in yesterday's post, I attended the dedicatory lecture for the opening of the Rosenbaum Library last Thursday. Speaker Lilla Vekerdy showed images of the some of the highlights of the H. Richard Tyler Collection of neuroscience texts, and I decided to do a little comparison with our own History of Medicine Collection here at OHSU. What I discovered is that our editions are especially interesting for their provenance:

Tyler's library includes a 1496 edition of Albertus of Orlamunde's Philosophia pauperum, an early psychology textbook. Vekerdy showed Albertus' diagram of the ventricles of the brain, sort of a 2D version of a phrenological model, with three perfect circles neatly packed into the brain case. Alas, our earliest printed book is 1528, and we have no Albertus.

Next, Vekerdy mentioned Caspar Bartholin's Anatomicae institutiones, which is represented by a 1626 edition in the Tyler Collection. Here at OHSU, we do in fact have a version of this work: our 1677 edition of Thomas Bartholin's edition of the Institutiones was given to us by Dr. Robert S. Dow, the noted Portland neurologist.

Marcello Malpighi's Epistolae anatomicae was discussed as one of the first neurological texts to contain illustrations based on microscopic investigations; while we don't have this particular work of Malpighi's, we do have a 1697 edition of his works, published posthumously in London. This copy was purchased with monies from the George E. Burget Memorial Fund.

Lastly, Vekerdy mentioned the great Charles Bell and his work on cranial anatomy. His 1802 text is considered by some to be "the Magna Carta of neurology." While we currently only have a reprint of the 1811 brain anatomy, we do have several of his other neurological works, including an 1833 edition of The nervous system of the human body donated by the Portland neurosurgeon John Francis Ortschild, former student of Harvey Cushing.

For more information on these or other neurosciences titles in the History of Medicine Collection, search our online catalog or contact us directly.
Posted by Sara Piasecki at 10:08 AM

On Thursday evening last week, I was privileged to attend the dedicatory lecture and reception for the newest library space at OHSU, the Herbert Rosenbaum Library of the Department of Neurology. Located on the 12th floor of the Hatfield Research Center in space formerly occupied by a waiting area for neurological surgery, the library is intended primarily as a study space for residents in neurology, and will contain some journals and monographs, as well as at least one computer workstation. Funding for the new library, and many of the materials it contains, were donated by Medical School alumnus Herbert Rosenbaum, M.D., now emeritus professor of neurology at Washington University in St. Louis.

Dr. Rosenbaum invited Washington University's special collections Librarian Lilla Vekerdy to deliver a talk on "Neurology and Rare Books" in honor of the event. Vekerdy began with a lengthy quote from Arnold Klebs to Harvey Cushing, extracted from one letter in the three-way correspondence between Klebs, Cushing, and J.F. Fulton which led to the formation of the Yale Medical Library Historical Library in 1941. She then talked about two issues affecting would-be collectors of neurological classics in particular: the comparatively late start of neurology as a specialty, and the relatively high cost of neurosciences titles in the rare book market. Washington University's Becker Library has been fortunate enough to have recently received a major donation of rare neurological texts from H. Richard Tyler--which they are still working on processing; they're at "S"--and so have one of the best collections of neurosciences titles in the country. If you'd like to check it out, you can read about their collections online here.
Posted by Sara Piasecki at 2:07 PM