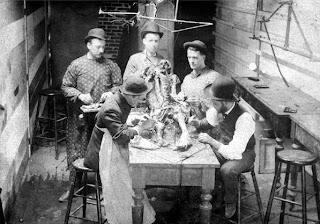 I love it when little pieces of loose information all flow together suddenly and serendipitously to create that perfect moment in time: aha! And finally, it all falls into place and a "lost" document is restored to its rightful location in the information universe. Such a confluence of data happened just today.

We received a query from the Dittrick Medical History Center and Museum about a photo in their collections, which just happens to be a copy of one we have here in the Historical Image Collection. The Dittrick has put together a fantastic little online exhibit, "Haunting Images: Photography, Dissection, and Medical Students," showcasing some of their images of what you might call "fun with cadavers," a popular turn-of-the-century pastime for medical students. In the course of researching their photos, they came across the one we also have, and wondered if we could complete the names of the men shown.

Well, as it turns out, they already had a lot more information included on their copy of the image than we had--or, certainly less misleading information. Ours, dated 1927, has last names of four of the men, but one name is clearly uncertain. This, coupled with the date, led us down the garden path to our own door: we assumed that 1927 was an accurate dating, and then looked for names of men associated with the school in the 1920s who had the same or similar last names.

The Dittrick copy, however, is clearly dated 1887. This was a major new piece of information, which allowed us to make the ultimate paradigm shift: maybe this wasn't the University of Oregon Medical School, maybe it was the Willamette University Medical Department!! Oh, Willamette, with whom we had such a love-hate-love relationship. We broke from her in 1887, merged with her in 1913, and the history of the schools during that period remains sketchy at best--primarily because many of the records appear to have been lost somewhere along the road.

Paradigm shifted, we can now see our way to the facts in this case: the gentlemen shown are all grads of Willamette's medical school class of 1887, so this must be the dissection room or anatomy lab at the Portland campus of WUMD in 1887. We can identify the men correctly as: Otis D. Butler, John J. Sellwood, Herbert W. Cardwell, Curtis Holcomb, and Frank S. Wright.

I blame OD Butler for part of this confusion: as he was wrapping up his studies at Willamette, he was working as demonstrator of anatomy at the just-formed University of Oregon Medical School. He must have been sympathetic to the cadre of men who broke ranks with the Willamette faculty to establish their own school, but maybe he was warned that his credits would not transfer. In any case, pieces of the puzzle are now back together, and we can include this information with our copy of the photo for future researchers.

Another small triumph! Time for a well-deserved weekend...
Posted by Sara Piasecki at 1:26 PM No comments:

Measure twice, cut once, but Read the Label Three Times

A great little donation came into our collections today: Read the Label Three Times, a collection of anecdotes on nursing. Written by former Doernbecher Hospital Superintendent of Nursing Shirley Thompson, the vignettes are presented as letters from a student. As the preface explains: "This is the story of Ann Bartlett, a student nurse in Southern California, who later worked as a young graduate nurse in Detroit, Michigan during the 1920s and 1930s. The events recorded here are based on the author's experiences, with names changed and some situations telescoped in time."

Here's a snippet from one of the "letters":

The other evening I ran headlong into one of those rules which hover over us. "Never sign any kind of legal paper for a patient."

An elderly woman patient on my unit was very ill, in fact, near death with pernicious anemia for which there is no cure. Her lawyer was at her bedside when I stopped to check on her and he asked me to help hold her up in bed long enough for her to sign her will. She could barely hold the pen but managed to make an X on the signature line. When she finished the lawyer handed me the pen and asked me to sign as witness of her "mark." I frantically explained to him that it was against the rules, but he insisted it was essential and assured me I would not get into trouble. I felt caught in a steel trap but I realized this was about the last effort the patient could make. With great fear I signed my name...

This book is recorded in OCLC's WorldCat, with only one holding institution: the book vendor Baker & Taylor. Since B&T isn't in the business of lending books, I guess that makes us the only library to own a copy. It will be added to our Pacific Northwest Archives Collection and be available to any one who wants to know the rest of the story...

For more information on Shirley Thompson's role in the history of the OHSU School of Nursing, check out Barbara Gaines' great History of the School, 1910-1996, freely available in its entirety from the SON website.
Posted by Sara Piasecki at 1:38 PM No comments:

Shockingly enough, today is the one year anniversary of this blog. It came to life on a Tuesday--because, really, isn't Tuesday one of the more inspirational days of the week? In that time, 241 posts about Historical Collections & Archives activities, events, and materials have made it to the web. It may not be great literature, it certainly isn't art, but August 22nd does happen to also be the birthday for a number of great writers and artists, such as Ray Bradbury and Dorothy Parker, Henri Cartier-Bresson and Jacques Lipchitz. Who knows, maybe a little inspiration will flow from our Leonine siblings--and no cracks about our nascent resemblance to Dorothy Parker or a Lipchitz, thanks very much!

Enjoy some cake for us, and let us know how it was.
Posted by Sara Piasecki at 12:18 PM No comments: 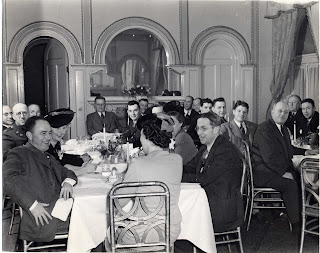 It's been a pretty image-heavy past few days here, as we begin to incorporate all of the photographic materials from the massive OHSU News & Pubs donation into our existing Historical Image Collection.

By default, the pictures we received with this latest donation are categorized by person (since these were the UNP faculty files). But not all of the images are simple head shots. This one was filed under David W.E. Baird--former dean of the medical school, who can be seen smiling, hand to right coat pocket, in the foreground at the far left.

The photo was taken, according to the note on the back, at the Oregon Conference on Social Hygiene, sponsored by the Brown Institute, held February 5-6, 1943. Social hygiene never looked like so much fun! (Well, ok, maybe it did look like a lot of fun, even back then. Check out all the posters in the University of Minnesota's digital collection.)

If you'd like to find out more about what these people are smiling about, check out some of the publications of the Oregon Social Hygiene Society and the Social Hygiene Society of Portland in our collections and in Summit. We also have a history of the Brown Institute, which had a prominent role in the development of the Department of Public Health and Preventive Medicine here at OHSU. Even more information can be found in the (as yet unprocessed) Harold Osterud Papers (Accession 2004-004).
Posted by Sara Piasecki at 2:41 PM No comments: 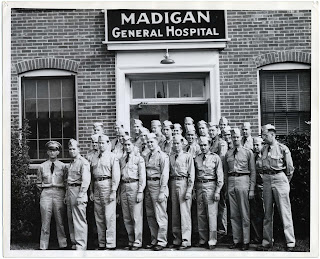 Looking further for information on veterans and medical education in Portland in the 1950s, I was flipping through the photographs categorized as "Military Science: Miscellaneous" when I came across this great image. The caption on the back reads (in part):

One of the first ROTC groups to receive training in Army General Hospitals, men from the University of Oregon Medical School Portland, Oregon are currently on a six weeks training period at Madigan General Hospital, Tacoma, Washington. ... Monday, 8 Aug. 1949

The medical trainees were themselves all veterans of the war which had just ended.

Photo by the Dept. of the Army
Posted by Sara Piasecki at 1:14 PM No comments: