A few weeks ago, a faculty member here at OHSU was in the History of Medicine Room and mentioned to us that his current office was the site of an old death: the head of toxicology had "keeled over at his desk," according to the story. Who was it?? we asked--but the name of the deceased wasn't known by this particular faculty member. Mostly, he wanted to know who else might have inhabited that office over the course of the last 100 years, and whether anyone else had met their demise in its confines.

Well, this morning, I stumbled across the name of the dead toxicologist, all unexpectedly, going through the materials from the News & Pubs faculty files donation we received last month. In the folder labeled "Aitchison, John P., PhD" I found the following typewritten document:

with the handwritten note:

found in his office at approx 6:20 this morning by a lab technician

There are also some mysteriously vague phone message notes included in the folder, and the entire obituary page from the Wednesday, April 6, 1983 Oregonian--which makes NO mention whatsoever of Aitchison's death. Hmmmm...

As it turns out, Aitchison had been born in New Westminster, BC, and educated at UBC, UC Berkeley and UC San Francisco. He joined the University of Oregon Medical School in 1969 as an assistant professor and had achieved the rank of associate professor in 1973. He had been considered an authority in industrial and forensic toxicology.

He is buried in Crescent Grove Cemetery in Tigard, Oregon; the cemetery register lists him as a Mason.

I can only begin to wonder whether he was the victim, inadvertent or intentional, of the substances he studied. The mystery lingers for the next researcher...
Posted by Sara Piasecki at 9:35 AM No comments: 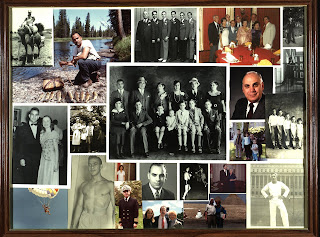 If a picture is worth a thousand words, we just received a nice, long essay from two emeritus professors here at OHSU, Drs. Joseph and Ruth Matarazzo. Preparing for a celebration to mark Joe's official retirement from the Dept. of Behavioral Neuroscience, the duo had several photographs from their personal collection digitized. Afterwards, they kindly agreed to donate these files to the Historical Image Collection, to be available in perpetuity for future historians (well, in relative perpetuity--after we print them all out onto paper, of course).

Shown here is a collage of some of the photographs showing Joe at various times in his life, as sailor, fisherman, family man, parachutist. We have very few photo collections that illustrate in any meaningful way the lives that our faculty and graduates lead outside of medicine--Herbert Merton Greene's Collection really being the only other that comes to mind--and we are delighted to have this new addition!

When Dr. Joe Matarazzo was named the year's Outstanding Scientist by the Oregon Academy of Science in 2003, it was noted that:

Matarazzo established the nation's first medical psychology department, serving as the OHSU department's chairman from 1957 to 1996. His primary research interests are behavioral cardiology and neuropsychology. Matarazzo's research on the Wechsler Adult Intelligence Scale has had "an important impact on this venerable and still-leading instrument for measuring intelligence," according to the OAS.

Posted by Sara Piasecki at 11:34 AM No comments:

A quick notice to those of you who were unable to attend the May 18 History of Medicine Society Lecture: Michael Bliss' talk "An American Epic: Harvey Cushing and the Founding of Neurosurgery" is now available as a streaming video on our lectures website.

There, you will also find the complete schedule for the 2007-2008 season of lectures, which will start off with a bang on Friday, October 12, as J. Bruce Beckwith delivers his talk on the history of descriptive teratology. Beckwith is credited with, among other things, being the first to define SIDS, or Sudden Infant Death Syndrome.

Now, back to our regularly scheduled daily madness here....
Posted by Sara Piasecki at 1:11 PM No comments:

We have just received from cataloging a set of video interviews exploring the history of the OHSU School of Medicine, originally created for the School's centennial in 1987. Available in DVD, VHS, and (for those tech museum folks out there!) U-Matic, the three-part series Centennial interview, 100 Years: Reflections includes:

Working in an archive of materials which are, by definition, historical in nature (read "dated"), I tend to forget that the issues recorded were once, perhaps, front-page news. A stark reminder today as I unfolded an original, typed, anonymous letter filed in the News & Publications faculty file for Dr. William S. Fletcher, M.D. (expletives herein replaced with asterisks):

You dogmatic, disparaging, dispassionate educated bunch of a******s some one should put a stick of dynamite up your a******* for releasing a statement, wholly with out cause, only with the intent to reduce the stock in price of G.D.Searle & Co.--Syntex Corp.
Thru this dogmatic statement, you have cost the stockholders millions of dollars. With the market already in a sensitive state of mind, has been bid up high in recent months, as investors see a large market for contraceptive pills, particularly the shares of Searle & Syntex. This is the oldest gag in the world, only a breath of cancer scare was needed in this case to drop the stock so you could benefit by buying in at the dropped price.
I believe the search is in order on the rats in oregon, instead of the search of effects of hormones on rats. If your search had been carried out over aperiod of time, instead of going off half cocked with an assign uproar, After all we have the Government's Approval for this hormone to be placed on the market, If you are right the Government's wrong in approving the product and if any one is interseted in getting it off the market it should be the government.
You dirty b******s cost five of us over $10,000.00 loss.
A retraction of this dispatch had better be retracted.
[Signed] 5 friends.

The letter refers to a statement issued by Fletcher, J. Engleburt Dunphy, M.D., and E. Douglas McSweeney, M.D., to accompany publication of their paper "The effect of various hormones, isotopes and isotope tagged hormones on induced breast cancer in the rat" published in JAMA (1965 Jan 11;191:116-8). One of the brand-name contraceptives implicated in the study was Enovid, the very first oral contraceptive approved by the FDA. The statement (also filed in the folder) reads:

The discovery of synthetic estrogen-progesterone-like drugs which are effective when taken by mouth is one of the major medical advances of our time. Like all potent drugs, they must be treated with respect. Millions of people are taking them for good reason and to discontinue their use arbitrarily would cause untold hardship, if not outright tragedy. It is, therefore, mandatory that all of us be entirely responsible in any reporting of any information on the subject. Such information must be kept in context and in perspective.
The findings reported herein are only one tiny facet of a broad front attack on the enormously complex problem of the biology of cancer. In fact this investigation was conceived and carried out by Dr. McSweeney because of published reports that some breast cancers do respond to treatment with progesterone-estrogen combinations and with the hypothesis that the use of oral contraceptives might be prophylactic treatment for breast cancer. The results were the reverse of those anticipated but are consistent with other observations in the field and indicate that much more work needs to be done on the relationship of hormones to cancer.
However, rats are not people and it must be kept in mind that the reported experiments were carried out in a biological system which is highly sensitive to the effects of hormones on breast cancer.

This being such a measured statement, I have to wonder whether the anonymous letter writer was responding, not to the doctors' statement, but to the crude representation of the study in the popular press. It certainly would not have been the first time that the media had exaggerated or misrepresented scientific studies, and it was, sadly, not the last.
Posted by Sara Piasecki at 12:26 PM No comments: