I've been doing some collection development work on the History of Medicine Collection lately, assessing our strengths and weaknesses in key areas like cardiology/cardiothoracic surgery and physical diagnosis. These two areas in particular come together quite nicely in one volume on our shelves: Henry Bowditch's The Young Stethoscopist, or, the Student's Aid to Auscultation. (Our copy is actually the New York Academy of Medicine's reprint, since the original 1846 edition can't be had for less than $2500 these days.)

As we learned last week in Dr. Madison Macht's presentation on Howard P. Lewis, M.D., the art of auscultation and percussion was being practiced with astounding skill and adroitness on this campus during the middle years of the 20th century. But writing in 1846, Bowditch was breaking relatively new ground: although Laennec and Auenbrugger had established the foundations at the turn of the 19th century, their techniques were not fully embraced by the medical profession for another fifty years. Bowditch notes in his preface that "Fifteen years ago, [physical signs] were sneered at by many persons. Now, very few would be foolish to do so..."

But medicine then was just gathering its momentum, starting to show its own signs of rapid advancement, technological innovation, and the rush of new discoveries. Patients, too, have played a role in the move away from the art of medicine to the science behind it, demanding state of the art imaging and assays. So, the art of the physical examination has waned almost unto extinction among younger practitioners, who would be wise to heed Bowditch's advice, as salient now, surely, as it was 160 years ago:

"Amidst the niceties of our physical examinations we are apt to neglect the rational signs. The truth is, that he who scoffs at either must necessarily be a child in the diagnosis of not a few diseases; and he who cultivates both with the clear, keen-sighted eye of a true observer, and then notes their mutual relations, is the truly wise physician."

Let us hope that physicians embrace again the art of their profession, and let us hope that patients again begin to trust them in doing so.
Posted by Sara Piasecki at 10:50 AM No comments:

Score One for the Good Guys 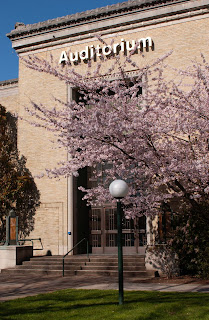 After sixteen years as the OHSU Auditorium, the building we all know (and love) as Old Library has been renamed Old Library Auditorium!

And the local flora is celebrating.

Additional information on building history, significance, and construction is available online (PDF ; go to p. 157) from the Lawrence Building Inventory in the UO Scholars' Bank.
Posted by Sara Piasecki at 12:27 PM No comments:

Several new books in the history of medicine have made their way onto the New Books shelf in the OHSU Main Library this week:

Jack El-Hai, The Lobotomist: a maverick medical genius and his tragic quest to rid the world of mental illness (Wiley, 2005), tells the story of neurologist Walter Freeman and his development of this controversial procedure. See Amazon reviews of it here.

John Aberth, The first horseman: disease in human history (Pearson Prentice Hall, 2007) describes diseases and their impact on society, from the medieval Black Death to the modern scourge of AIDS.

Systematically working my way through the WZ portion of the NLM classification in the book stacks of the Main Library yesterday afternoon, I came across several medical history gems that bear dusting off, not the least of which was Camilla: Montana prairie pioneer. This two-volume memoir (with another two volumes planned, but apparently never published) tells the story of Camilla M. Anderson, M.D., graduate of the University of Oregon Medical School Class of 1929 (making her a classmate of Asahel Hockett of recent blog fame).

Dipping in to this autobiography, we find Dr. Anderson's reminiscences of her medical school years, including this vignette:

"The women students were harrassed to some extent by the fellows and by some instructors, but this was not the general rule. I recall only once our cadaver was decorated with a condom and a red ribbon, and everyone waited to see how Cornelia [Robertson] and I would respond to this, but it was no major event."

Since Camilla "had a reputation for being religious, and she [Cornelia] did not," I suspect that this prank was more for Camilla's benefit than Cornie's.

This anecdote about the cadavers used for dissection in anatomy class reminds me of a similar story in Esther Pohl Lovejoy's memoir:

We often ate our sack lunches right at the dissecting tables. I'm sure it was to demonstrate how hardened we were. When time came for dissecting intestines, some of the students used the intestines to jump rope, but mostly, there was little disrespectful behavior. On a couple of occasions I had dreams of talking to our cadaver, and getting his reassurance that what we were doing to his body was OK with him. There was one unusual episode, however: One morning all of us students were requested to leave the dissecting lab and go to the classroom. Shortly thereafter, a young man and young woman were ushered into the lab, and soon left. We students were permitted back in the lab, and were told that the guests were the son and daughter of one of the cadavers. They had recently learned their father was one of our specimens and they had come to appropriate his body. However, they did not press their rights because the school had offered to pay them money for the privilege of retaining it.

It's probably a telling sign that Camilla was dreaming about the mental state of the cadavers: she later went on to become a psychiatrist. She wrote several books on psychiatry and mental health, as well as on the challenges of raising a brain-damaged child.

The OHSU Library copies of Camilla's memoir are signed by the author, who donated them to the school in 1998. I find no record online of her death, so Camilla may still be out there at the P Diamond Ranch in Sidney, Montana, entertaining folks with her tales.
Posted by Sara Piasecki at 7:45 AM No comments:

This morning's Dept. of Surgery Grand Rounds featured an historical talk by resident Dr. Laszlo Kiraly on the "Evolution of Blood Transfusion." Studies of the efficacy of transfusions and papers on best practices abound in the contemporary literature, and Dr. Kiraly's talk reflected this pace of development: nearly two thirds of his presentation discussed the history of the field since the 1980s.

Kiraly started at the beginning, though, mentioning the literal blood baths once taken by the ancients as remedies for a host of maladies. He traced the first transfusion to 1492, when Pope Innocent VIII reportedly received blood from three young boys before he (and they) died. (Kiraly admits that this may be a legend dating from a slightly later time period, but notes that the story shows that at least the idea of blood transfusion existed early on.)

Zipping through the intervening centuries, Kiraly brought the audience to the brink of World War I, emphasizing that wars and medical breakthroughs often go hand-in-hand. By 1918, preserved blood was being used successfully on the battlefields of Europe, but it was really the Spanish Civil War (according to Kiraly) that saw widespread use of transfusions for casualties, primarily because civilians began to be tapped as donors for blood banks. In WWII, America developed the "Blood for Britain" program, and started checking blood for bacterial contamination. Germans, meanwhile, began paying civilian donors while the Russians used cadaveric blood with some success.

The next advance came with the development of plastics for storage (see, they're not all bad!) and by 1979, shelf life had increased to 42 days. The 1960s and 1970s were the golden days of transfusion, and there was little thought devoted to disease transmissibility. That all changed, of course, with the appearance of HIV/AIDS on the world scene; in 1983 the FDA mandated the first donor screenings.

These days, the public perception of blood transfusion is that it is a very high-risk procedure. Kiraly notes that while perceived risk from viral infection is actually quite low, there is some moderate risk from misidentification (being addressed now with plans to individually barcode all blood containers), and risk as well from bacterial contamination. He focused on complications from transfusion-related acute lung injury (TRALI) and transfusion-related immunomodulation (TRIM)--the latter actually being of possible benefit in patients in whom a depressed immune system may be favorable to a positive outcome (such as transplant recipients).

After touching on a few of the blood substitutes used over the years, from milk to PolyHeme, Kiraly ended by describing the current state of transfusion science as perched on a balance point between skepticism and enthusiasm. As research progresses, the history of blood transfusion will only get more interesting...
Posted by Sara Piasecki at 12:16 PM No comments: