TGIF: another history of medicine class, and another reason to be thankful for modern medical care.

Today's lecture to the second-year medical students was delivered by Dr. James Cereghino of the OHSU Dept. of Neurology. His talk, on the history of epilepsy, outlined how far humankind has come since, well, the dawn of civilization--which is how long epilepsy has been with us. However, no one wrote about the disease until 400 B.C.; that's when Hippocrates wrote his treatise, On the sacred disease, which actually debunked the prevailing theory that epilepsy was a divine gift.

From divine disease, epilepsy was downgraded to demonic possession by the Romans and others after them. When patients were treated, they were given, according to Cereghino, pretty much "anything that could be swallowed" (and not nice things like champagne, either). Other options included witchcraft and castration or hysterectomy (since most patients were women, epilepsy became associated with general hysteria). With those as alternatives, some patients were probably glad to hear that their doctor had opted for the more scientific treatment by trephination.

These modes remained in wide use until the 19th century, when bromide came to the fore. Alas, everything has its downside: bromide caused boils. Phenobarbitol, introduced in 1912, has been found to lower IQs. And the side effects of thalidomide ultimately resulted in changes to the way medicines are developed and tested.

Cereghino noted that he's not sure how long the term "epilepsy" will continue to be used. Like "fever," epilepsy is an umbrella term for a number of subcategories of syndromes. Once the data has been gathered and analyzed, will it still be classified as a disease? Or, like fever, will it be recognized as a symptom of a larger problem? Only time will tell.

In the meantime, if you'd like a comprehensive look at the history of epilepsy, check out Owsei Temkin's book The Falling Sickness, which remains the standard in the field 60 years after its initial publication.

And final note for you romantics out there: Saint Valentine is the patron saint of epileptics. Slip that into your loved one's card this year!
Posted by Sara Piasecki at 2:03 PM No comments:

In the course of arranging and describing our University Relations & Public Affairs Records (Accession 2004-008), we uncovered a letter from faculty member Dr. Ivan Woolley outlining his hestitation in hiring a certain candidate for a position in social services. The comments are, themselves, a bit wooly (in the sense of being a little rude in nature) and perhaps not quite appropriate for reprinting in the 21st-century blogosphere. Suffice it to say that it made us a little more interested in Dr. Woolley, whose papers we also have here in the archives (Accession 2002-004).

Taking a look at the guide for the Woolley Collection, we learn that Dr. Woolley, a 1919 graduate of the University of Oregon Medical School (the last year before the move to Marquam Hill) was the founder of both the Oregon Radiological Society and the Pacific Northwest Radiological Society, and served as vice-president of both the American College of Radiology and the Radiological Society of North America. His book, Roentgenology in Oregon: the first fifty years, remains the only work on the history of radiology in the state.

Taking a look at the inventory for the collection, though, we see some things we might not expect to see in the papers of a radiologist, such as the "old style phone shoulder rest" (old as of when? It was hard to get good help in the early years). More interesting are the physician's patient register and the early photographs of the Medical School. Also of potential value to researchers is the correspondence with the various organizations with which Woolley was affilliated, including the Multnomah County Medical Society. Having seen, in the URPA Records, how Woolley was wont to express his opinion in writing, I'm guessing that there are a few more howlers lurking in these folders!

Posted by Sara Piasecki at 11:55 AM No comments: 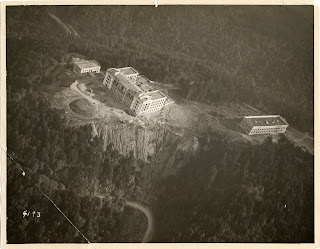 For those who have not visited the Story Wall yet, a visual teaser...

Today, working on another project, I had occasion again to utilize this image, one of the more stunning aerial views of campus from our Historical Image Collection. This shot, taken in the early 1920s, shows the first two buildings on the Marquam Hill campus: Multnomah County Hospital (right) and the Medical Science Building (left), which was later renamed Mackenzie Hall.

The sheer walls of the surrounding canyons, heavily eroded, vividly illustrate the engineering challenges that were faced--and overcome--by the builders of our most recent buildings, such as the Biomedical Research Building and the Kohler Pavilion.

Small wonder that geologist Warren D. Smith delivered this opinion to Dean Dillehunt in 1931: "This is an engineering job from now on. The time to consult the geologist was before the Medical School was built and it is now like calling in the doctor after the appendix is broken."

So be it. But who better to look after a patient with a ruptured appendix than a medical school?
Posted by Sara Piasecki at 1:29 PM No comments:

When too much is still not quite enough

Bear with me, dear reader, since I know I've ridden this hobby horse before: you simply cannot provide too much information on an archival finding aid!

Today's example was provided by a researcher from the National League for Nursing who was looking for information about a speech given by former OHSU School of Nursing Dean Carol Lindeman. We received several boxes of Dean Lindeman's papers (Carol A. Lindeman Collection, 2004-029) a few years ago, and although we did not have the staff time to devote to processing the collection then, we minimally processed the materials and created an inventory.

The need to create an inventory for an unprocessed collection presents a philosophical question: how much information is enough? What is the best information to pull out of the documents? You may not think this much of a conundrum, but plenty of ink has been spilled in the archival world about "folder-level" or even "box-level" versus "item-level" description. A now-famous paper, written by Mark A. Greene and Dennis Meissner, asserts that minimal description is required to reduce backlogs and get collections into use.

Now, this sounds like a reasonable approach--laudable even--until you start seeing the "uses" that these minimally processed collections are asked to serve. Since we're a small shop here, with a fairly small backlog and a firm dedication to our researchers, a fairly detailed inventory was created for the Lindeman Collection. That inventory was then put on our web site, which is where it was discovered by our researcher at NLN.

Did our somewhat detailed (but nevertheless incomplete) inventory answer her question? No. Did it help me locate something within the collection which, once read, would answer her question? Sadly, again no. The answer may very well be in there--in fact, I'd be willing to bet on it--but without the additional time it would take to either a) read through the whole collection, or b) create a complete item-level finding aid (which activities would really be one in the same), the answer remains elusive.

I suppose that supporters of Greene and Meissner would point to the fact that the researcher determined the location of Lindeman's papers, and then contacted us to look for the information, as support for their theory that just a little description goes a long way. With that I would agree. But sometimes the road to the answer is even longer, and I think everyone would be happier if we could finally get to the end!
Posted by Sara Piasecki at 2:00 PM No comments:

What's it good for?

Sometimes, people seem skeptical when I suggest to them that modern researchers might be interested in our old paper, these off-line collections of medical lore. Well, finally a concrete example of new uses for old dogs! An article recently published in the British Medical Journal (2006;333;1314-1315) describes how a group of researchers "mined" a 400-year old Dutch text for information on therapeutic plant extracts.

Called "Searching historical herbal texts for potential new drugs," it could not illustrate more plainly my point that, someday, everything old can be new again. In the section "Implications," the researchers state: "Our findings show that potential drugs can be identified by searching historical herbal texts;" and the conflict of interest statement at the end announces that the Mayo Clinic has already applied for the patent on the antibacterial properties of the plant in question. Peer-reviewed publication, patent money: now there's motivation enough for many a quester.

If someone wanted to get started on such an historical dig here in the OHSU collections, there are several prime candidates for scrutiny. Immediately coming to mind is our collection of three olas, manuscripts written in Pali-Sinhalese on the leaves of the talipot palm. One is called the YAKSHA RAJA THILAY—literally, 'King Devil Oil,' but really indicating only that this was a very powerful medicinal oil. Another, dated to circa 1570, is on THE PREPARATION OF PILLS AND OTHER DRUGS, and most probably belonged to a Ceylonese physician of the time period. Lastly, we have an early 19th century ola called YOGASATAKAYA—a collection of notes on malaria, typhoid, pneumonia, etc., and prescriptions for their treatment.

If Pali-Sinhalese is not your second language, you might consider approaching one of our continental manuscripts, such as the anonymous German Artznei buch dem menschen zu villen krankheiten, dated 1668 at the end. Or, Johann Conrad Keller's Manuscript on pharmacology, begun January 12, 1733.

Is English really your strong suit? We have something for you: an anonymous manuscript on medical prescriptions, written circa 1871-1887. See? Now you, too, can look for the miracle drug of the future--and all we'll ask for is a nod in the acknowledgments section of your groundbreaking paper!
Posted by Sara Piasecki at 2:21 PM No comments: