I've calmed down a little, so here are the full lyrics to the Tram Song, for those eager to sing it on their first rides:

This tram is your tram, this tram is my tram
From good ol' Pill Hill to the Willamette River
From the halls of science to Portland on the water
This tram was made for you and me

(Last verse same as the first)
Posted by Sara Piasecki at 11:13 AM No comments: 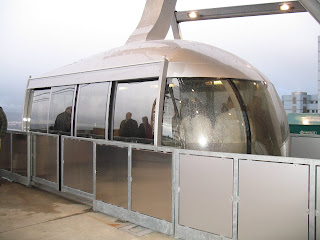 Well, I was one of thirty "randomly selected" OHSU employees chosen to ride the tram this morning on its inaugural trip (although, the media got a ride yesterday, so we weren't really the first to go).

We gathered together on the 9th floor of the Kohler Pavilion at the construction zone that is the tram terminus. We filed out onto the platform, which fully lived up to its billing as "open to the elements" (today's morning weather report: raining, 36 degrees Fahrenheit).

Out there, next to the car, we joined together in a rousing chorus of "This Tram is Your Tram, This Tram is My Tram" (full lyrics available upon request: I'm way too excited to sit here and type them all in!). That took long enough that we missed our ride! The first car headed out of the station, and we had to wait for the next to arrive.

Car having arrived, the doors opened and we started piling in: all 60 or so of us. I was hoping someone was keeping track of the load limits so we wouldn't stress the cables... Doors closed, a small lurch, and off we went!

The car was absolutely silent; as conversation quieted, we could hear someone's dog barking down below. The rain rolled down the windows, steamy from the bodies packed inside, but the view was amazing. A small bump and roll going over the support tower was the only distraction from the sensation of floating through the air, high above the city.

I turned around as soon as we got to the Center for Health and Healing (I needed to secure a cup of coffee to warm my camera-laden hands), and the ride back up was even more pleasant with a smaller crowd. The cabin attendant let us look at her control screen, which shows car speed, wind speed, and other diagnostics.

We slipped into the berth at KPV and disembarked. As the rain tapered off and the light came up on the city, it was a glorious view. For those of you who ever have a chance to experience it, I highly recommend the ride.
Posted by Sara Piasecki at 9:28 AM No comments:

It's been busy morning here in terms of in-house patrons, but between human-human interactions I've snuck in a little time for human-computer interactions. Working through the medium of electricity, I've managed to load into the Digital Resources Library several photographs of recent oral history interviewees, thus giving faces to the disembodied voices in the recordings.

It was just in 2004, when we began our closer collaboration with the history of medicine in Oregon project (sponsored by the Oregon Medical Education Foundation, with support from the Oregon Medical Association, The Foundation for Medical Excellence, OHSU and the Oregon Historical Society), that we started taking digital photographs of interviewees at the time of the interview. In the DRL, you'll see pictures of interviewees from both projects, since we're now acting as a secondary repository for the OMEF project.

While we do have a complete list of interviewees in the OHSU Oral History Project online, as well as indexes for all the completed transcripts, we have not yet embarked on our plan to place full transcripts and audio clips online as well. It's definitely a long-term goal, so stay tuned!

I have also added today some information to one of the photographs of Esther Pohl Lovejoy previously loaded into the DRL. Our Lovejoy expert, Dr. Kimberly Jensen, let us know that the man in the photograph (not identified on the print itself) is Francis Xavier Mattieu, one of the "octagenarians for sufferage" that were recruited during the women's campaign. An earlier theory that the man was in fact Esther's father Edward Clayson was discredited by Jensen, who reports that Esther and her father were very much estranged during the last years of his life.
Posted by Sara Piasecki at 12:45 PM No comments:

I came across photographs today of not one but two television filming events here on the Marquam Hill campus, both in the 1970s.

The first was filming for the television series Movin' On, which shot an episode on the UOHSC campus in 1974. I'm not old enough to remember this one, but Wikipedia tells me that it featured Claude Akins and Frank Converse as truckers. No mention in that article of which episode might have been filmed out here in Oregon; maybe the men are truckers with hearts of gold who give presents to sick children. You can't tell much about the plot from the photographs themselves.

The second event was the filming, in 1979, of the made-for-television movie Walking Through the Fire, which was based on a book of the same name written by Laura Lee. It tells the story of a young pregnant woman who discovers that she has Hodgkin's Disease.

The nearly-completed tram is sure to become a major draw for filmmakers. I'm already envisioning the potential chase scenes for the next James Bond movie....
Posted by Sara Piasecki at 9:45 AM No comments:

Penguins, goats, and snakes--oh my!

I've just finished foldering the contact sheets and negatives in the Proof Collection folder labeled "Animals." Of course, in a medical setting, one might expect small rodents, dogs, that sort of creature, maybe zebrafish. With the Primate Center out on West Campus, you'd definitely expect monkeys. No dogs or mice in this folder, and only one set of photographs of a monkey (part of a psychiatry department research project on appetite).

We have penguins (and we've seen the penguins before, in the Drum Collection, and heard the funny penguin stories courtesy of Joe Adams' oral history interview).

We have many, MANY pictures of the goats being used in cardiology research in 1975.

And we have shots of Zinger the Cat with Tinnitus, being studied by the faculty in Otolaryngology. Karen, our Archivist, asked me: How did they know Zinger had tinnitus? Hey, I just read the captions printed on back...

While taking a break from sleeving, I did also load some new pictures of Baird Hall into the Digital Resources Library. I added five new images, thus more than trebling the available Baird Hall views. One shows in beautiful close-up the entryway metalwork, dual caduceuses (caducei?)--two caduceus symbols side-by-side. The double-snaked caduceus, not to be confused with the equally well-known but single-snaked staff of Asklepios (Asclepius, Aesculapius, however you prefer to spell it), is a common symbol for medicine. It's also the symbol for the most coveted parking spots here on campus, the few stalls directly in front of, well, Baird Hall.

[Incidentally, this shot also makes nice desktop wallpaper! To use it for that, or presentations, or any other applications, click on the "Full Resolution" link all the way at the bottom of the image screen. Happy clipping!]
Posted by Sara Piasecki at 2:54 PM No comments:

Minutes for a lifetime: University of Oregon Board of Regents

This morning, one of our patrons accessed one of our unprocessed collections in her efforts to locate information on Grace Phelps, early director of the Multnomah Training School for Nurses (the first incarnation of the OHSU School of Nursing--SoN now has an endowed professorship named after Phelps, and there's a small blurb about her on the web site).

An unprocessed collection is one that has not yet been fully arranged and described by our Archivist, Karen Peterson. This generally means that we have some vague notion about what is contained in the box(es), but no sense of exactly what information lies within. Since it was down in the History of Medicine Room already anyway, I decided to take a peak into 2004-022, a.k.a. Medical School Committee, Board of Regents, Doernbecher Children's Hospital Records.

Turns out that the temporary collection name is only half the story: the collection (a single old-fashioned binder, half-filled with blank sheets) contains the minutes of the UO Board of Regents meetings that dealt with either Doernbecher Memorial Hospital for Children or the Medical School proper. The meetings were held between 1926 and 1929.

Because I couldn't restrain myself, I glanced through some of the bullet points. Here are a few tidbits:

Right off, I notice that the first meeting was being held in the offices of Lawrence & Holford. Interesting! Why? Not on university grounds, but in the offices of the "university architect," about whom we've learned so much over the past few months as we investigated campus architecture. Discussed in the minutes are all the expenses related to construction of Doernbecher, outstanding bills, donations and appropriations. "Blanket warmers etc." provided by Albatross Metal Furniture Co.--sounds comfy!

Close on the opening of the building (Aug. 16, 1926), the committee wanted Ralf Couch to approach Otis Elevator, to see what it would cost to change the elevator to "automatic control." Too much HIPAA non-compliance in front of the elevator attendant already?

Schedule of hospital rates for Doernbecher approved at the Aug. 30, 1926, meeting set rates for a private room at $7.00 per day, with major surgery costing $10. If you wanted anesthesia with that major surgery, that would set you back another $10.

In an important note for the history of the nursing school, Miss Phelps reports on March 14, 1927, that "several schools of nursing in the state are eager for affiliation with the Doernbecher Hospital." This was the start of the pediatric rounds which students in various nursing programs in the Portland area would make through the wards of Doernbecher.

While the Board clearly respected Miss Phelps' authority (she was "given authority to manipulate the pay roll within budget limits" in the April 25, 1927 minutes), you can still see evidence of her struggle to elevate the status of the nursing school within the institution: "Miss Phelps made a special report of her trip to New York to the Conference on University Relations with Schools of Nursing, one of the main decisions of the conference being that thos[e] present unanimously agreed that nursing units should be established definitely as a separate school and not as a part of a department of a school" (March 19, 1928)

Interestingly, we see in the Jan. 7, 1929, minutes this counterposed note from Dr. Richard Dillehunt: "[He] presented the matter of establishment of a Nurses' Training School in the University, either as a separate school of nursing administered by a Dean, or as a department of the School of Social Hygiene." Not very welcoming...

And that's where I really had to stop because, sadly, I have other work waiting! If you're interested in following the rest of the story of how the School of Nursing developed, check out Professor Emerita Barbara Gaines' history. As for the many other fascinating facts in the Board of Regents Medical Committee Minutes--come check them out for yourself!

P.S. We now have walk-in hours every Thursday noon-3:00. Appointments still required (but readily available!) for other days/times. Now you have no excuse not to drop by!

Posted by Sara Piasecki at 2:15 PM No comments: