The Oregon State League of Nursing Education (OSLNE or OLNE) began organizing in 1922 and then applied for membership with the National League of Nursing Education in April 1923. The mission of both organizations centered around consideration of all aspects of nursing education, defining and maintaining minimum standards for education, promoting professional relationships and collaboration, and developing and maintaining the "highest ideals in the nursing profession."

The Oregon League focused on nursing education and continuing education, public health nursing, training of Native American nurses (albeit, a seemingly minor program), and advocacy work (such as for greater nurse employment and better funding for education and employment opportunities). And they were pivotal in moving Portland's nurse training school from the County Hospital to the University of Oregon (which became OHSU).

From 1947 to 1950, the League operated as the Educational Section of the Oregon State Nurses Association (later the Oregon Nurses Association). They changed again, along with the National organization, in 1952, to become the Oregon League for Nursing, expanding the mission to include fostering the improvement of nursing services and education through more coordinated actions of nurses and associated professions, agencies, and schools. For a time, from around 1972 until 1981, the name was changed yet again, to Oregon Citizens' League for Nursing (OCLN). However, the name was returned to its earlier form after a number of concerns and complaints were raised in regards to the word "Citizens'" being added.

The Oregon League for Nursing records (Collection Number 2017-019) cover many of these topics, including becoming a member of the National League; advocating for nursing education and greater nurse employment; raising funds and advocating for better funding for both education and employment of nurses; producing educational programs, such as films, radio dramas, and public speaking engagements; and day-to-day governance of the organization.

Of particular interest is a significant run (1953-1985) of the organization's newsletter, "The Oregon Reporter." The newsletter charts much of the history of the organization, serves annually as a bulletin for the annual convention, and also documents related happenings in the region. View the finding aid for the Oregon League for Nursing records for more information. 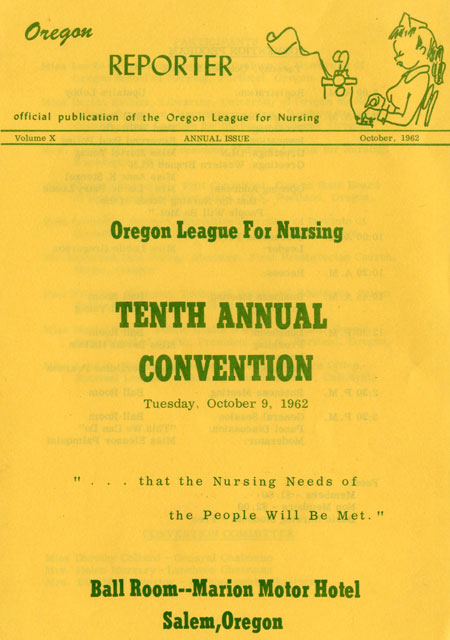 Posted by Steve at 8:00 AM No comments: Links to this post

I recently finished processing my first collection at OHSU - the Dorothy A. Robinson Mann papers (collection 2010-008). Mann graduated from the University of Oregon Medical School Nursing Department in 1942 and began serving in the U.S. Army Nurse Corps shortly thereafter. The collection contains a selection of her Army records, including a detailed inventory of the clothing and equipment she received while in the service (only one fork, knife, and spoon were issued – I hope she never misplaced them!). An avid photographer, Dorothy took many photographs to document her experiences in the U.S. and Europe. This collection includes a large scrapbook in which Dorothy arranged her photos and wrote copious descriptions alongside them. We had to dismantle the scrapbook for preservation purposes, and while doing so we came across quite a few gems. Below are just a few of them:

While in Europe, Dorothy served in the 46th General Hospital and didn't forget to take photos of their temporary tent hospital. Nor did she forget handsome Major Joe, a dog who "belonged to a GI that was headed for the front so a couple of our nurses adopted him - he had a fit whenever any of the men needed to work in our compound. He was left with another kind soul. The powers that be would not allow him to ship out with us".


While traveling with the 46th to Besançon, France in August-September of 1944, Dorothy found time to capture the beauty of her surroundings. 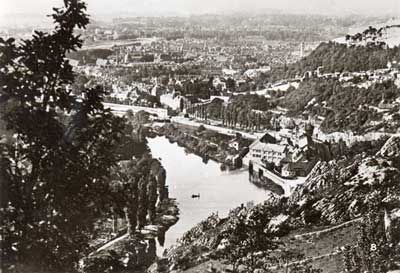 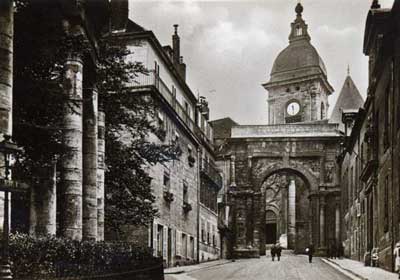 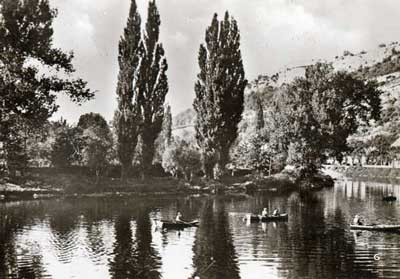 In December of 1944, a routine chest x-ray revealed that Dorothy had pulmonary tuberculosis, and she retired from the Army in late 1945. After recovering from her illness, Dorothy went on to earn her Bachelor's Degree in Biology at Lewis & Clark College. Included in this collection are copies of her paper "Cambarincola Gracilis Sp. Nov., A Branchiobellid Oligochaete Commensal on Western Crayfishes," which was published in the Journal of Parasitology in 1954.
Posted by Historical Collections & Archives staff at 9:00 AM No comments: Links to this post

Hi everyone. My name is John and I’ve just started as a student assistant here in the OHSU Historical Collections & Archives. After spending several years living across the United States, I finally settled down in Portland to begin my academic endeavors. I graduated from Portland State University in 2016 with a BA in Anthropology and a minor in French (the latter completed while studying abroad at l'Université de Poitiers), with the intent to work as an archaeologist on the Pacific Northwest coast.

After graduation, I came to the conclusion that I would rather spend my time curating cultural artifacts after they’d been brought back from various sites, rather than be the one who spent hours in the field. So I decided to pursue an MLIS with an archival focus at Emporia State University (much like several of the other past and present student workers here). As well as working here, I volunteer at Lewis & Clark’s archives (taking over a project that Rosie started there) and also barista and bartend.

When I graduate, I’m hoping to find work in a museum, anthropological department, or historical society working with artifact collections. While here at OHSU, as well as processing more document focused collections, it looks like I’ll be helping to organize and process some of the fascinating medical tools and objects in the artifact collection, putting my archaeological skills to good use. I’m more than looking forward to sharing some of my favorite finds with you here on this blog.
Posted by Historical Collections & Archives staff at 8:00 AM No comments: Links to this post

Hello! My name is Rosie Yanosko and I'm delighted to be working as a student assistant in the OHSU Historical Collections & Archives. Before starting here, I worked upstairs in the library's Access Services department. I'm a month or so away from graduating with my Master's in Library and Information Science from the University of Maryland's online program. I'm very much looking forward to completing my studies and having time to read for pleasure.

Though I'm new to the world of archives, I'm eager to delve into the collections and to learn more about archival processing and preservation. Prior to starting here, I interned at the Lewis & Clark Special Collections & Archives and volunteered at the Oregon Historical Society Research Library. These experiences cemented my desire to work in archives - I love exploring record keeping idiosyncrasies and long forgotten stories hidden in collections. I look forward to sharing noteworthy finds with you here on the blog!
Posted by Historical Collections & Archives staff at 9:00 AM No comments: Links to this post