I almost titled this post, "Bertha Hallam was a total boss," and if you don't already agree with me, you will after reading this!

A few months ago I came across the profile, "Portrait of a Librarian," in the Summer 1965 University of Oregon Medical School's "What's Going On?" publication. Honoring Hallam's forty-six years of service (she retired in 1965, the year of publication), the piece describes her upbringing in rural Minnesota, her start as the first UOMS librarian at the NW 23rd and Lovejoy building, and her larger-than-life stature among the medical circles of the Pacific Northwest. Click each page to enlarge and read more about the woman the writer calls a "four-foot, ten-inch dynamo": 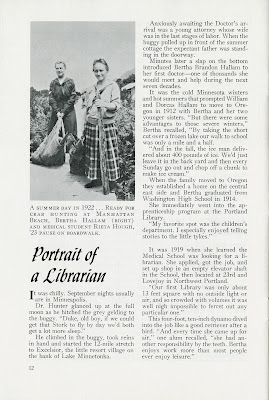 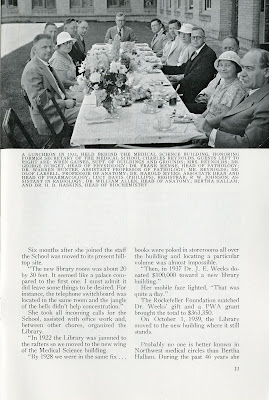 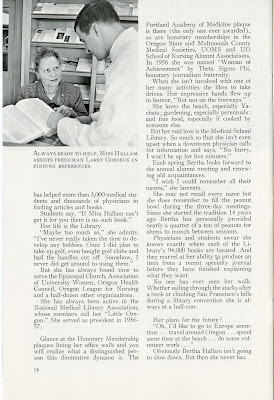 If one looks at Hallam's long list of honors, honorary memberships, and achievements, it becomes clear how passionately she advocated for medical libraries, and how proactively she engaged with the medical communities up on the hill and around the region. She was an honorary member of Oregon State Medical Society, the Multnomah County Medical Society, the Portland Academy of Medicine, and University of Oregon Medical School Alumni Association -- that's not even counting all of her pioneering work in the Medical Library Association!

So, how did a librarian become such a staggering figure among professional medical associations? I'd like to present you with one example of Hallam's determined advocacy efforts from the Pacific Northwest Medical Association Records. In 1931, the Pacific Northwest Medical Association was hosting their annual meeting in Seattle. Medical professionals from five states and three Canadian provinces were attending. Hallam wrote to Dr. Frederick Epplen, Secretary-Treasurer of the organization, to ask to attend and share the services and new acquisitions that the UOMS Library offered to the members as practitioners. Epplen wrote back to turn down her request:
Undeterred, Hallam took her request up the chain to the Dr. George W. Swift, President-Elect of the PNMA and chair of the Committee on Arrangements for the 1931 meeting, including an attached 2-page list of the services available to Northwest physicians and the new acquisitions the library offered. And when her first letter went unanswered, she persisted!
I am especially fond of her full steam ahead approach evident in her closing line, "If I do not hear from you, Miss Ashworth and I will drive to Seattle Wednesday afternoon." I was also quite pleased to see that Clarice Ashworth Francone, medical illustrator and future head of the medical illustration department at UOMS, was also part of the plan!

So, did her persistence pay off?
I guess that got Dr. Swift's attention!

One thing that strikes me about these documents is how they counter the narrative of the twentieth century reference librarian, sitting at the desk and passively waiting for students and faculty to come with questions. In 1931, Bertha Hallam was determinedly pursing the kind of proactive engagement with existing and potential users that liaison librarians are challenged to pursue today -- and she was quite successful! Keep in mind, Bertha Hallam was a female librarian at a relatively recently established medical library, with no postgraduate training, who managed to embed herself with numerous professional medical associations. Talk about a fearless trailblazer! We can all take a lesson from the playbook of "Miss Hallam," wouldn't you say?
Happy Women's History Month!