Any archivist faced with processing large collections of photographic material knows it can be a daunting, time intensive endeavor. I was handed such a project earlier this year, tasked with processing the School of Dentistry Image Collection, transferred from the SOD to HC&A in 2010. Consisting of 16 linear feet of photographic material, the collection contains both color and black and white prints, negatives, 35 mm slides, glass plate negatives, and glass lantern slides. Spanning the years 1890-2000, the images illustrate how the school has changed throughout the 20th century; notable figures in the school’s history, such as Dean Harold J. Noyes, D.D.S. and Professor J. Henry Clarke, D.M.D.; and the many professional and recreational activities students were involved in while completing their degrees.

Images typically require more detailed attention than paper-based records, including sorting by format and size and arranging and describing the materials in a way that 1) respects the organizational habits of the creator(s), when evident and 2) makes sense to archives staff and researchers. What use is a collection if no one can access it, right?! My job with the SOD Image Collection was to take the former arrangement of the materials, already divided into broad, general categories, and further subdivide them into more detailed series with more accurate descriptions. In order to make sure the photos are preserved for the long-term, I also sorted photos by format and size (bringing all 4x6 prints together, for instance). This was especially important for glass lantern slides, which are extremely delicate and nitrate negatives, which can off-gas and are potentially flammable. This also significantly reduced the amount of storage space needed to store the collection, requiring only 1 wall of shelves instead of 2!

What I enjoy most about processing the collection are the ways it reflects the camaraderie between students, faculty, and staff. In addition to images of dental and dental hygiene students and faculty in the clinic, labs, and classrooms, the collection contains numerous images of costume parties, banquets, sports games, and student trips. Contrary to the stereotype of the stern health professional, it is clear to me, at least at OHSU, dentists and dental hygienists know how to have fun!

To view a more detailed description of the collection, you can view the finding aid here: https://goo.gl/ubA8FH. Have any questions or interested in booking a research appointment? Feel free to send us an email at hcaref@ohsu.edu.

Don't forget, we'll be hosting Michael Helquist tomorrow, Thursday, September 17th, 10-11 am, BICC building, room 429. Please join us! To whet your appetite, here's a guest post by Mr. Helquist with some information on his research at HC&A and Dr. Equi's tenure at OHSU: 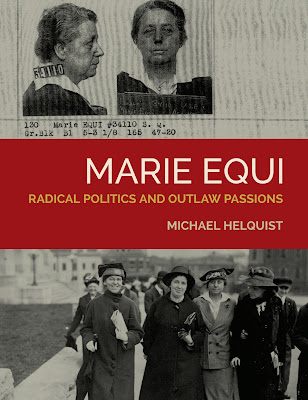 Historical biographies are possible because curious, dedicated librarians and archivists accommodate one more project and one more researcher who seeks their insight and hopes for their passion. I was fortunate to receive both for my biography of OHSU graduate Marie Equi (1903) at the Historical Collections & Archives of the university. At that time Sara Piasecki, former librarian of the collections, and Karen Peterson, former archivist, guided me through a trove of materials essential to my understanding of Marie Equi’s early medical study and career.

Marie Equi transferred to what was then the University of Oregon Medical Department in 1901 after completing two years of study at two different medical colleges in San Francisco. She was an earnest student, but she had developed a reputation for arguing with professors. She also endured considerable taunts from male students. Yet, documents in the OHSU collection revealed that Equi’s graduating class was one of the few to achieve gender equity, five women and five men. I also confirmed that Equi’s female companion in the California schools, Mary Ellen Parker, accompanied her to Portland, enrolled at OHSU, and graduated at the same time.

The historical records yielded significant information relevant to Marie Equi and other women students, especially the pioneering work of Lucy I. Davis who authored “A Study of Women Graduates of the University of Oregon Medical School and Willamette University.” Many graduates enjoyed solid, productive careers while a few had a tough time making a living or balancing a career with family life. Several made enormous contributions to medical care for the poor, lodging for unwed mothers, reproductive health services, and civic reforms, such as campaigns for pure milk and clean markets. A few sought to make national and global changes in woman suffrage, economic justice, and peace.

One physician I tracked closely was Belle Cooper Rinehart, class of 1897, who later co-founded a hospital and a nurse’s school in The Dalles, Oregon. Equi had befriended the older, married Rinehart years earlier when Equi homesteaded in the 1890s. Rinehart was the wife of the mayor, and Equi visited her at her house, reading in her library, and seeing her as a mentor. Rinehart also took a nontraditional route to medical school, enrolling only after the death of her husband.
Rinehart tried to block Equi’s graduation from OHSU. She reportedly told Dean Simeon Josephi that Equi’s temper was too fierce to function effectively as a doctor. The dean did not heed the warning.

Three years after obtaining her license, Equi was touted for her exceptional bravery and courage when she joined a contingent of Oregon doctors who rushed to aid victims of the San Francisco earthquake and fire in 1906. Equi was the only woman physician to join the group. After scouring through the medical school’s Annual Announcements and copies of local medical journals, I was able to profile the other doctors to understand better the dynamics of the relief mission. Equi travelled to Bay Area with doctors who later became influential civic and medical leaders, including Dean Kenneth A.J. Mackenzie. My research formed the basis for my talk in OHSU’s lecture series in 2006, for an article in the Oregon Historical Quarterly, and later for another chapter in my biography of Equi.

The materials and assistance from OHSU were both essential to completing my biography of Dr. Marie Equi, the first well-known lesbian physician in Oregon and the first physician in the region to adopt radical strategies to effect political change.

Join us Monday, October 12th for "Behind the Mask: World War I, Plastic Surgery, and the Modern Beauty Revolution"

We have a great History of Medicine lecture season ahead of us, and I can't wait for our first event! World history and its effects on plastic surgery and the beauty industry? You are not going to want to miss this one! See the event poster and details below. 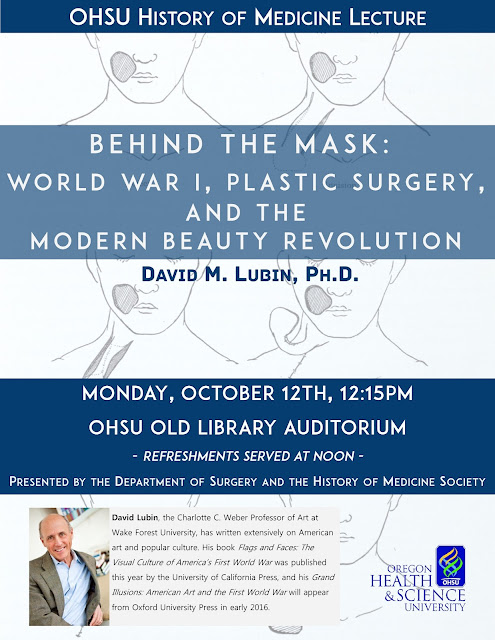 During the Great War, trenches exposed combatants’ faces to sniper fire and flying shrapnel.  In previous wars such wounds would have proved fatal.  Now, with improved medical and ambulance services, the wounded could be saved—but not necessarily their faces.  Crudely patched-together and sent back to the trenches or their homes, men with “broken faces” were routinely ostracized.  This lecture examines the humanitarian efforts of plastic surgeons to restore obliterated faces and sculptors to fashion prosthetic masks, while also considering the 1920s beauty culture that arose in reaction to wartime unsightliness.


David Lubin, the Charlotte C. Weber Professor of Art at Wake Forest University, has written extensively on American art and popular culture.  His book Flags and Faces: The Visual Culture of America’s First World War was published this year by the University of California Press, and his Grand Illusions: American Art and the First World War will appear from Oxford University Press in early 2016.

For a campus map, as well as customized driving, biking, and transit directions, please visit the interactive OHSU map: http://www.ohsu.edu/map/

See the event on the OHSU Calendar
Posted by Meg at 8:00 AM No comments: