We recently had a fun inquiry from Corban University. The university is situated on the historic grounds of the former Oregon State Tuberculosis Hospital in Salem, Oregon. They are converting the building below to a MAKER lab for students, and are seeking some of the history of the building in the process:

The structure is one of the early buildings of the TB hospital, and consists of one three-story main barn and an adjoining smaller barn that university folks have always known as the "milk shed."

We are fortunate to have the Oregon State Tuberculosis Hospital Collection here at HC&A, which is a relatively small but rich collection consisting of photographs from scrapbooks, hospital record books, and correspondence on the administration of the hospital and its assimilation into the University of Oregon Medical School in 1963. The hospital itself was housed on the grounds of the former Oregon Deaf Mute School, which was constructed in 1894 but abandoned shortly after because of its relative seclusion and difficulty of access. Seclusion and fresh country air, however, were exactly what the doctor ordered for TB patients in the Progressive Era, so the hospital moved in and started admitting patients in November 1910. For more information on the history of the sanatorium, I recommend checking out our 2005 exhibit, "Housing the Victims of the White Plague: The Oregon State Tuberculosis Hospital."

While I couldn't find images of the barn during its original use, I found some helpful supporting information that indicates some of its history. Searching through the images in the collection's scrapbook, I found an image of the hospital's dairy herd:
Included in the sleeve with the photo was the following information:

"In 1912 the engine room and dairy barn were constructed, and the Oregon State Tuberculosis Hospital maintained a large herd of dairy cows to supply the needs of the many patients on special diets, and the employees. At this time and for many years following the also maintained a farming project, which included raising of all garden supplies and feed for the dairy animals. The greenhouse was constructed in 1922."

When you think about tuberculosis treatment in the twentieth century (I know I do), the keeping of a dairy herd really fits in with the emphasis on occupational therapy and plenty of country air. TB patients often slept in open-air pavilions, such as the one below, also from Oregon State Tuberculosis Hospital: 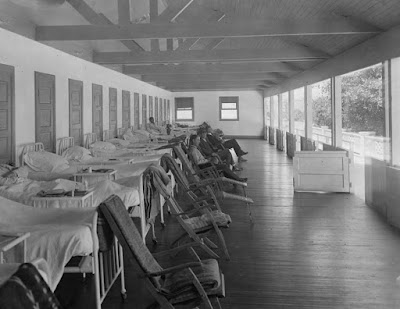 I also found a report from May 11, 1938 by superintendent, Dr. G. C. Beninger, that notes, "The institution maintains a herd of sixty Guernsey cattle for its milk supply."
We've even got the breed of cattle they kept - incredible! (Maybe I am the only person who gets excited about historic livestock and domestic animal breeds... Shout out to my fellow heritage chicken fanciers!) So from this information, it seems likely that the old barn is the former dairy barn, built in 1912. Below we see the sanatorium grounds in 1913, just one year after the dairy barn was built. Rustic!

It will be really fun to see how Corban University renovates the structure - it's always great to see historic buildings re-purposed rather than torn down. And if you have any further information on the Oregon State Tuberculosis Hospital dairy herd, you know we'd love to hear from you!