Highlights in the history of vaccines, inoculation and smallpox from our History of Medicine Collection

History of vaccines buffs and rare book fans, do I have a treat for you! As promised, I have some images to share of two books from our History of Medicine Collection, An Essay on the Animal Oeconomy: Together with Observations upon the Small Pox by Jean Claude Adrien Helvétius (published in 1723), and Thomas Dimsdale's Tracts on Inoculation (first published in 1768; our edition is from 1781).

First up is our English translation of An Essay on the Animal Oeconomy: Together with Observations upon the Small Pox. Jean Claude Adrien Helvétius is perhaps less famous than his son, the philosopher Claude Adrien Helvétius, but the senior Helvétius served as the first physician to the King Louie XV and Queen Marie of France. That the preeminent physician in all of France should address the issue of smallpox and its effect on the population indicates serves as some indication that the disease was cause for serious royal attention and concern.

For rare book lovers, I must say that our copy of this text offers two beautiful examples of bookplate/ex-libris stylistic flair! It features not one, but two distinctive bookplates, which identify the book as having passed through the libraries of two members of the British aristocracy, Henry Grey, 1st Duke of Kent, and Thomas Philip de Grey, 2nd Earl de Grey. This is likely unsurprising to a reader familiar with the labyrinthine genealogies of European aristocrats, but Henry Gray was actually a great-great grandfather of Thomas Philip de Grey on the maternal side.

Helvétius's opening remarks on the subject really speak to the impact of smallpox on eighteenth century European populations: "There is no Disease that can be less guarded against, than the Small-Pox." In the margin, a note emphasizes, "Small-Pox almost inevitable": 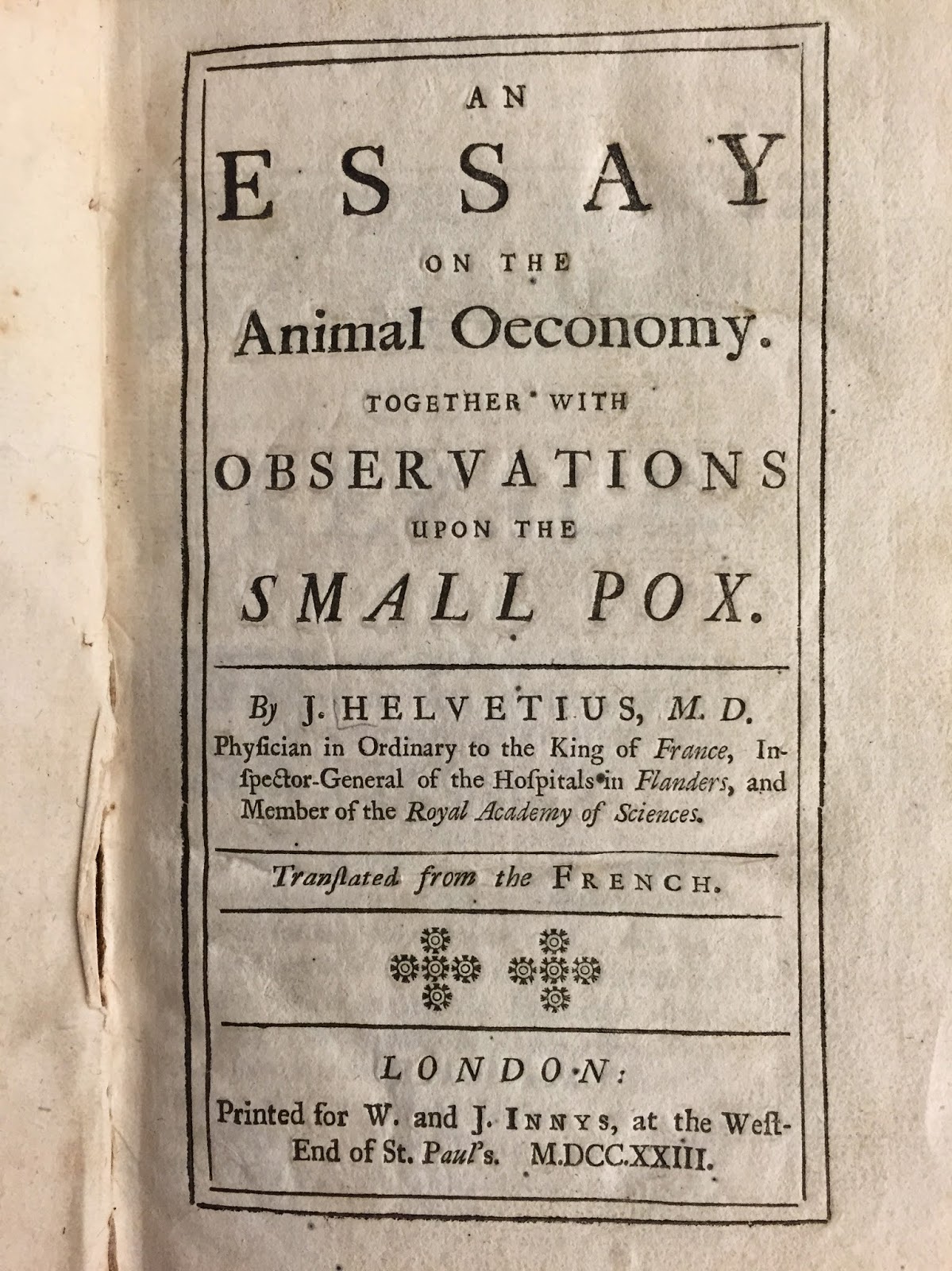 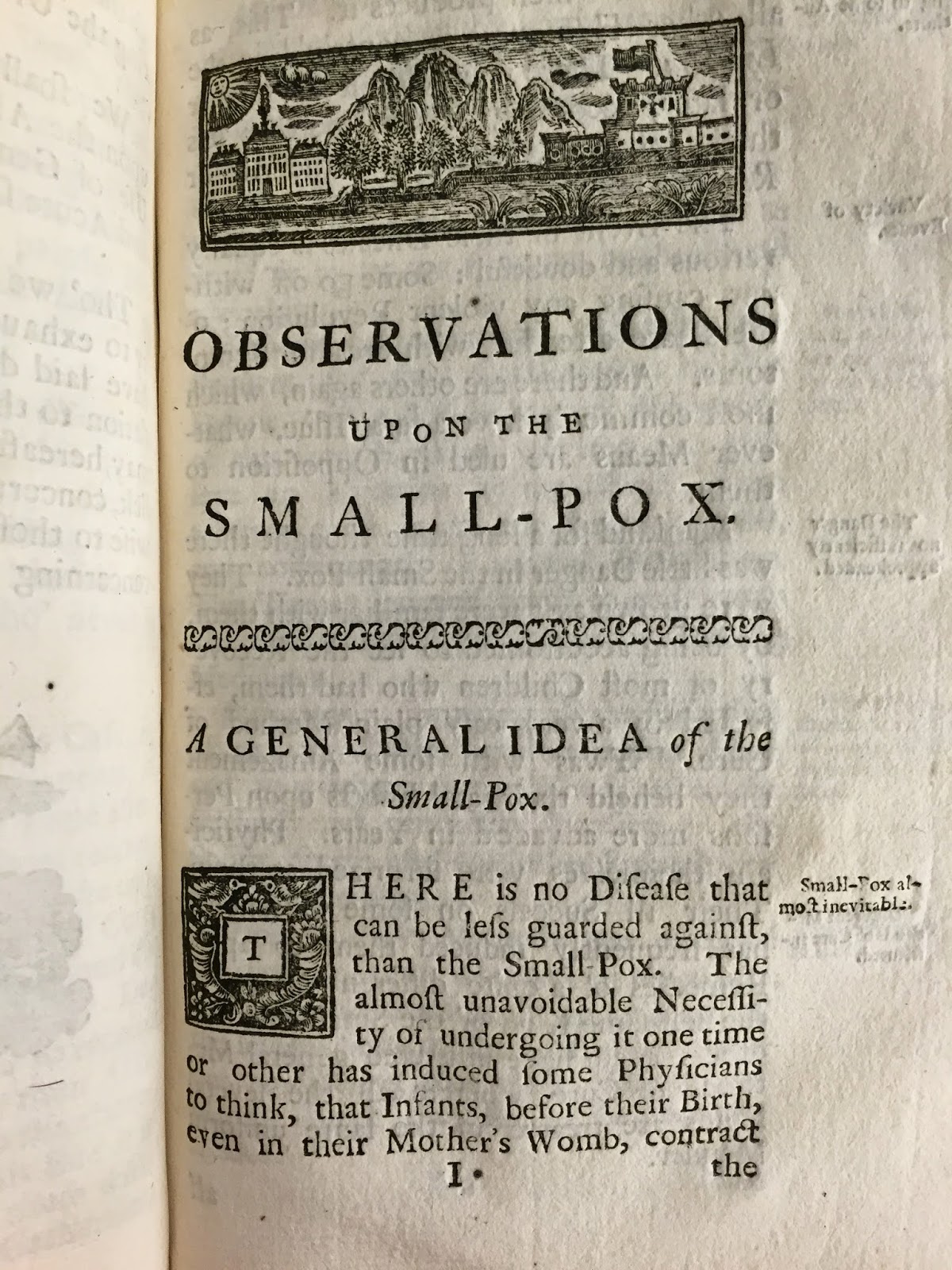 Advancing four decades in the eighteenth century, via our 1781 edition of Thomas Dimsdale's 1768 Tracts on Inoculation, we witness a great primary source on early European models of inoculation and desease prevention. Dimsdale's text, addressed to Empress Catherine II of Russia, describes his variolation of the Empress and members of her court. Empress Catherine, also known as Catherine the Great, extended this invitation after Dimsdale published The present method for inoculating for the smallpox in 1767.

Before we continue, you are probably asking, what is variolation and how does it differ from vaccination? I had the the same question! Variolation was the first method used to inoculate people against smallpox, using material from a patient or a recently inoculated individual.[1] This is a precursor to smallpox vaccination, a term first used in 1800 after Edward Jenner introduced his method of inoculating against the virus using material from the related, less dangerous cow pox. Variolation involved either rubbing or inserting dried smallpox scabs or fluid from pustules into superficial scratches on the skin (the European method), or blowing the material into the nose of the recipient (the original method employed by variolation's first practitioners in Asia). According to the National Library of Medicine, the practice arrived in Europe after Lady Mary Wortley Montagu, the wife of a British ambassador, observed variolation in Constantinople.[2] Upon her urging and with the support of the Princess of Wales, the practice was first attempted on prisoners and abandoned children, who were inoculated and deliberately exposed to smallpox in 1721. When the experiment turned out to be a success, the British royal family received the inoculation.

By Catherine's time, the practice was imperfect but popular among people with means in Europe. Catherine, who presided over what is often called the "Golden Age of Russia" or the "Russian Enlightenment," was very keen on bringing ideas from European arts and sciences to Russia, and stimulated advancements in the science of medicine and disease during her reign.[3]

In Dimsdale's account, we find not only comments on inoculation and the nature of smallpox, but also detailed accounts of the physician's variolation of Catherine and members of her family and the imperial court. 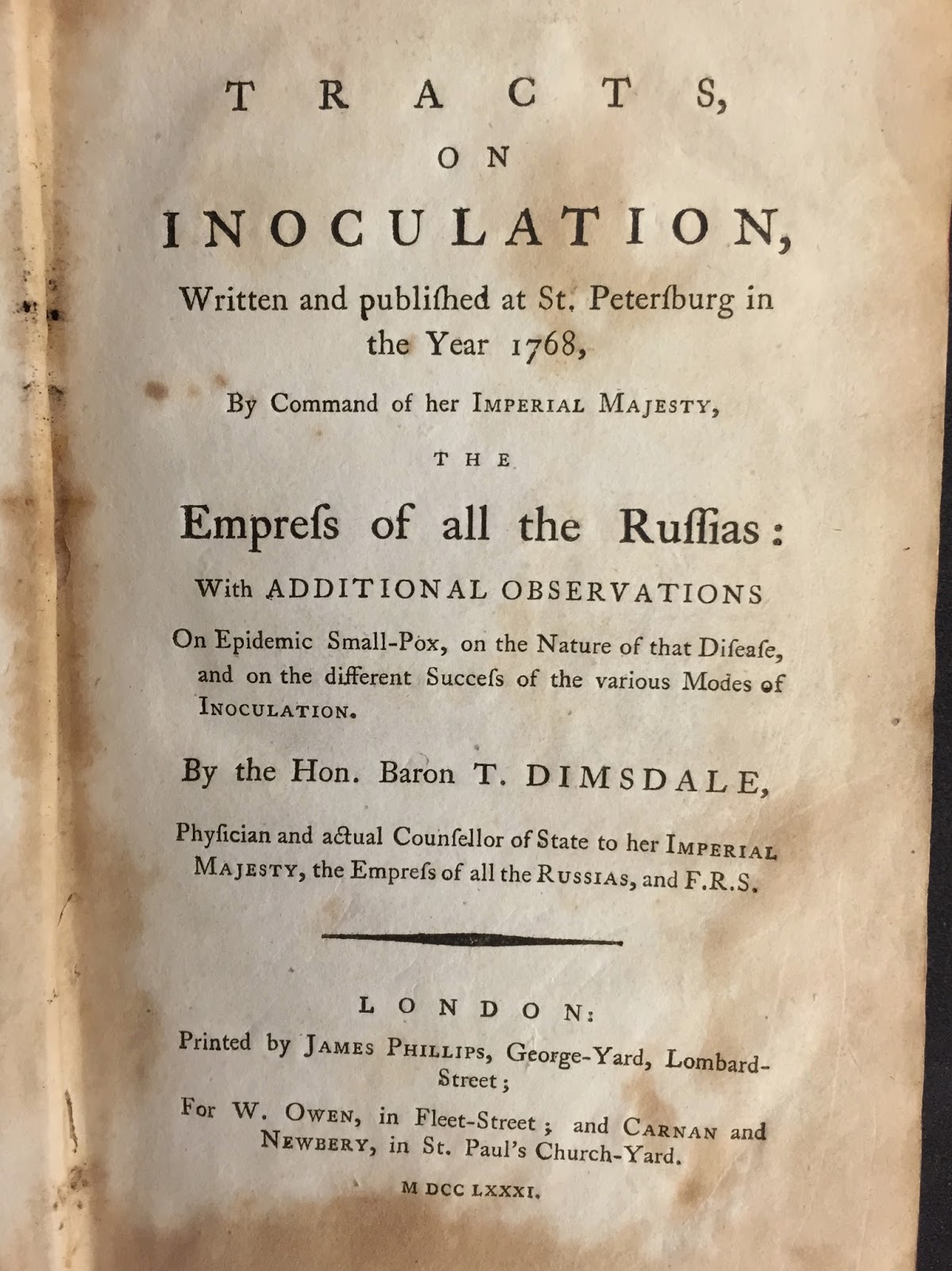 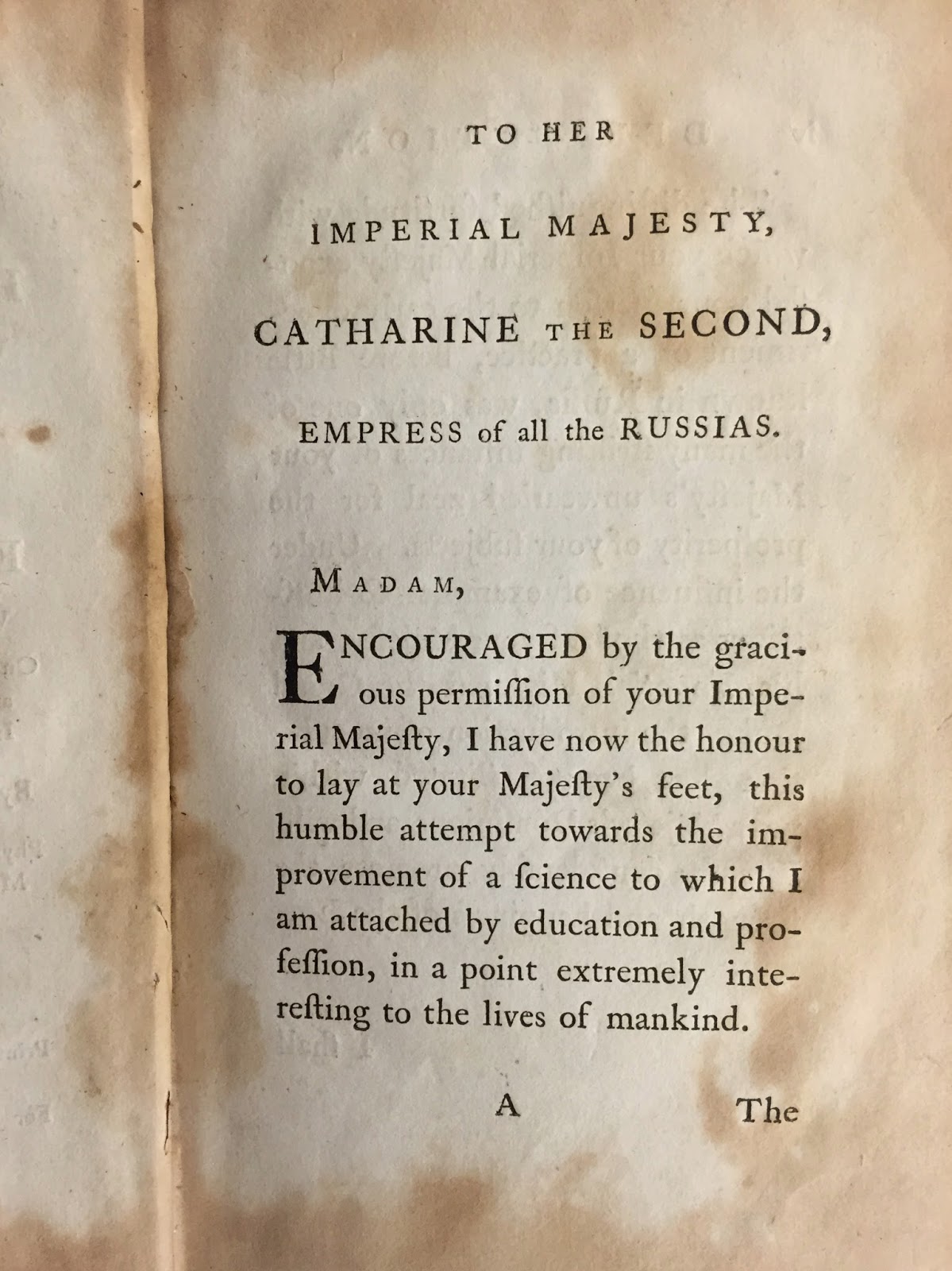 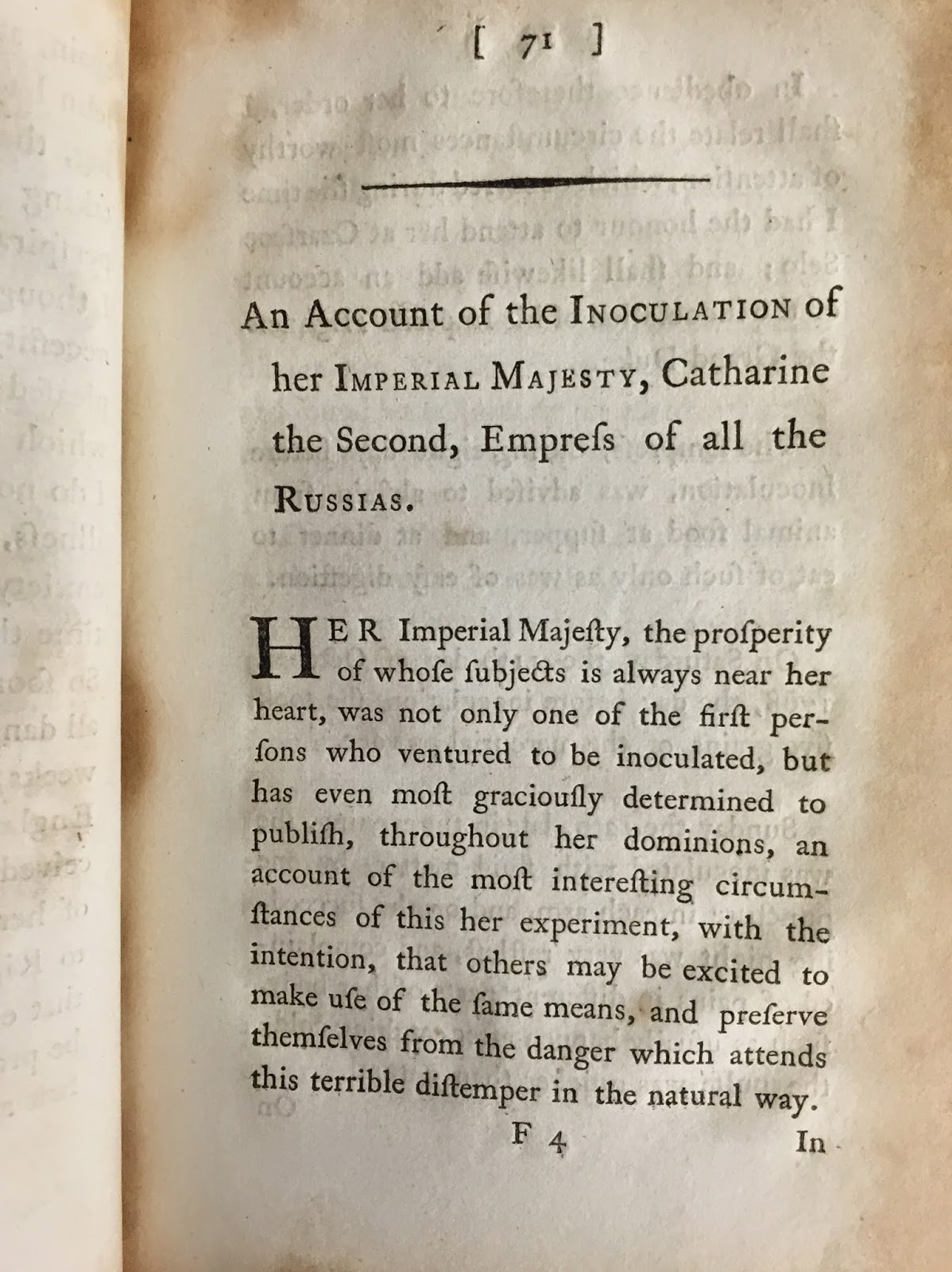 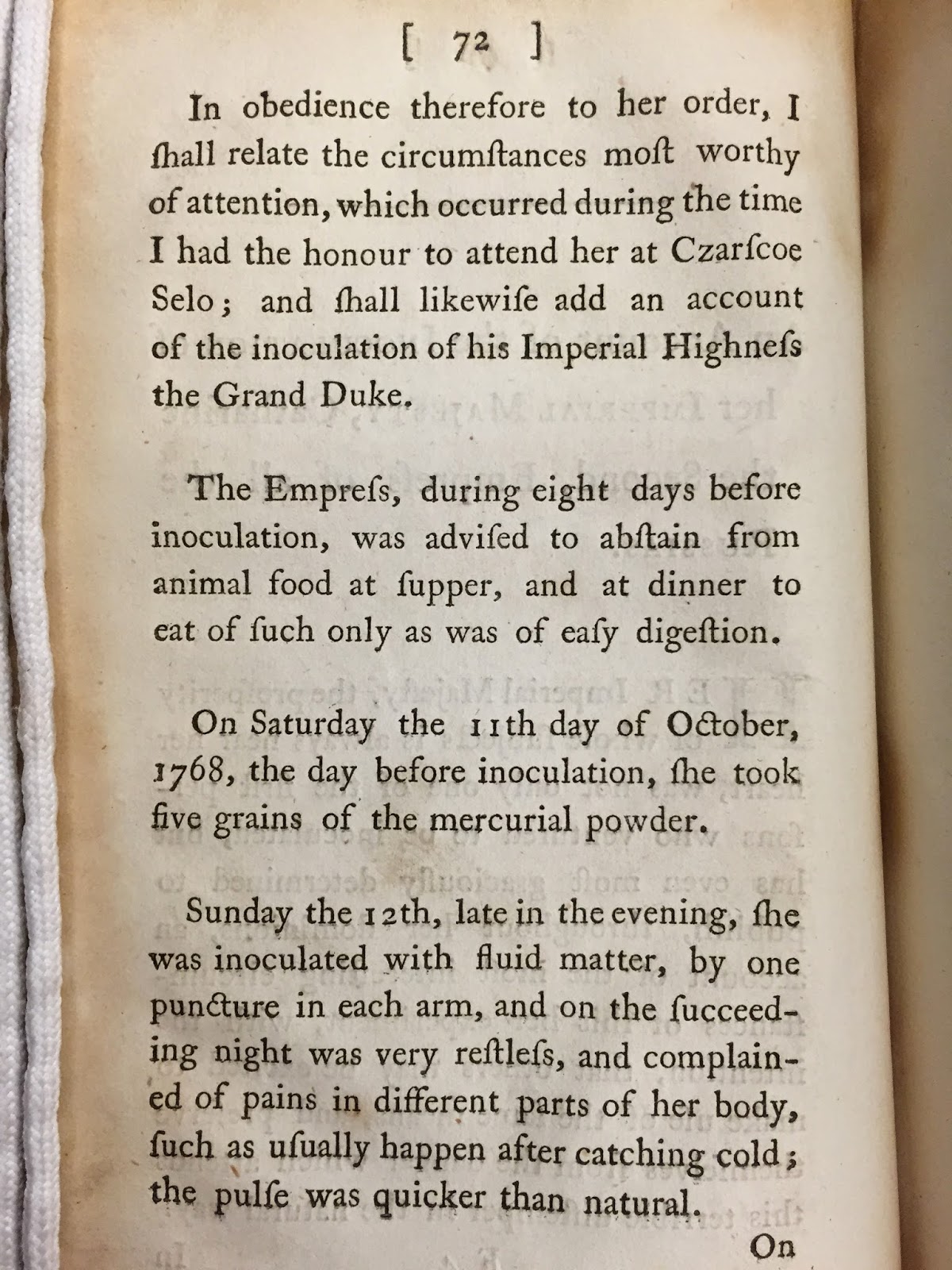 These texts serve as great examples of how rare books can be excellent primary sources in the history of the health sciences, as well as social and political factors shaping our concepts of disease. Rare books: not just for collectors, but also for historians, students, and public health crusaders!

Did you know that you can come explore our History of Medicine Collection for yourself? If you've got a burning question that you'd like to search in our historical texts, or if you just want to see some gorgeous bookplates, make an appointment to visit! Call (503)494-5587 or email me at langform@ohsu.edu.

The hottest artifacts in our collection

As promised last week, I return with something "hot."  Recently I asked Al Castellane, Research Radiation Safety Officer, to drop by the medical museum storage area to check out some potentially radioactive materials.  We visited the storage area and he ran a Geiger counter and a dose meter over the materials we have which include the following:

Sure enough, these items are hot as in, they emit low levels of radiation.  The actual readout for each material is as follows:
-The Revigator was the hottest with an emission 0.5 millirems per hour
-The Radium water emits 0.2 millirem per hour
The maximum dose allowed (not sustained) is 100 millirems per year and suffer no ill effects. Essentially, Archives Staff would need to work in close proximity (a few feet) of the object all day, every day for a year to potentially absorb enough radiation to be harmful.  Additionally, Al let me know that your average dental bitewing x-ray is ~0.4 millirems.  For additional perspective, Al said "the annual radiation exposure from natural sources (i.e. radon, cosmic, terrestrial and internal) is about ~310 millirems/year.

I took some detail shots of the objects to give you a better idea of the full "aboutness" of these materials.
The first image provides instructions for the use of the Revigator.  My personal favorite is that one should "drink freely when thirsty."  Solid advice.  The second image is of the inside of the jar.  Al mentioned that it could be interesting and sure enough we found it caked in radium salt (not for seasoning).

The Medical Museum Collection contains a wide variety of materials, however these are the only radioactive ones.  According to Al, he has not seen a Revigator in such pristine condition before, which makes this one of our more rare medical-related groups of objects.  They are available for viewing and research, just make an appointment with us and bring the lead apron!*

Until next time,
Max