It's been some time since we've delved into our fabulous History of Medicine Collection of rare books, so I thought I'd bring it back with a bang!* Behold, our two volume set of the 5th English edition of Antoine Lavoisier's Elements of chemistry : In a new systematic order, containing all the modern discoveries [QD28 L41 1802]: 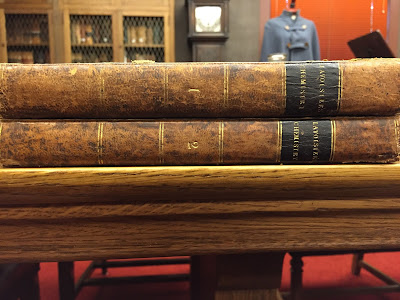 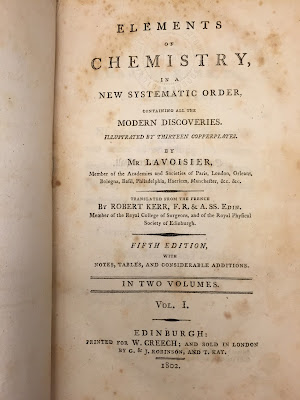 The book presented a host of new theories of chemistry, and is often considered the first modern textbook on the subject. Lavoisier is known for innumerable contributions to modern chemistry, including conducting some of the first quantitative chemical experiments and advancing a new theory of combustion. He also produced the first modern list of chemical elements, including oxygen and hydrogen, both of which he recognized and named himself. This "Table of Simple Substances" below lists thirty-three of what he deemed elements and their corresponding former names. The book also expounds on Lavoisier's ideas about elements formed chemical compounds. 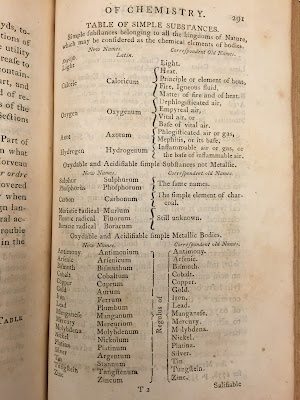 Volume II includes many illustrated plates, which detail both Lavoisier's instruments and their arrangements in his experiments. These diagrams are really a steampunk dream, with all of the early nineteenth century scientific apparatus you could ever hope for!

But perhaps the most compelling aspect of the plates to me is the fact that they were created by Lavoisier's wife, Marie Anne Lavoisier. Madame Lavoisier took instruction in chemistry from early in her marriage in order to act as her husband's laboratory assistant. One of her contributions was the creation of these plates. From initial watercolor sketches to final engravings, the plates were wholly the product of her work.** The detail of these plates allowed for the clear communication of the experiments, and more importantly, rendered the described procedures reproducible.

Below is the diagram for the gazometer, which allowed Lavoisier to take precise measurements of the weight and volume of gases.

While Lavoisier contributed a great deal to chemistry and the science of the Enlightenment, he found himself on the wrong side of the French Revolution's politics and was eventually executed during the Reign of Terror in 1794.

Marie Anne Lavoisier survived, though herself remained in jail for several months, and later published her husband's memoirs. Though she is not credited alongside her husband, Madame Lavoisier's contributions to his work indicate that she is another unsung heroine of modern science.