Last week, while searching for an appropriately impressive illustration to honor National Skull Appreciation Day (yes, this is a thing) on HC&A's Instagram, I pulled out William Cheselden's mid-18th century text, "Osteographia, or, The anatomy of the bones : in fifty-six plates." Turning the pages, I came across the illustration below and let out an excited "OOH!": 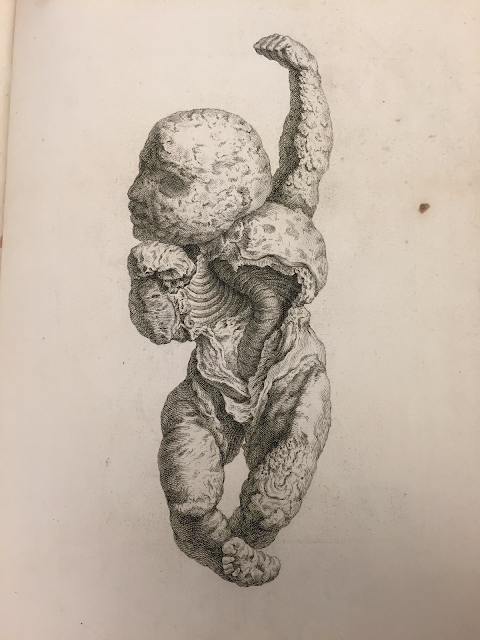 The table description reads, "A bony chalk foetus which was said to have lain in utero (I suppose in the faloppian [sic] tube) twenty-six years: Communicated to me by Monsieur Arneau owner of the french anatomy waxwork"

I recognized the image immediately as a lithopedion, also known as a "stone baby." The term derives from the ancient Greek root litho (λίθο), meaning "stone" and the word paedion (παιδίον), meaning "child" -- literally, stone-child. Lithopedions are incredibly rare, accounting for just 1.5-1.8% of abdominal ectopic pregnancies, which in turn only occur in approximately 1-2% of all pregnancies (1). A lithopedion forms when a fetus in an ectopic pregnancy dies, and is too large to be reabsorbed by the mother's body (they have been known to occur anywhere from 14 weeks gestation to full term). In order to protect itself from infection, the mother's body creates a protective calciferous barrier around the fetus, encasing it. Some recorded cases list the lithopedion remaining in the woman's body for decades -- a 2013 news item noted an 82-year-old woman in Bogota, Columbia carrying a stone fetus for 40 years! (2)

Fewer than 300 lithopedions have been recorded in medical history (3). As you might guess, lithopedions were more common in earlier centuries, and more recently in areas without access to quality prenatal care. Obstetric ultrasonography didn't come on the scene until the 1960s, and so prior generations of doctors had no way to see inside the womb and diagnose an ectopic pregnancy before it was too late. Even if they could have diagnosed it, the prospect of obstetric surgery (or any surgery, for that matter...) was quite dangerous and the surgical removal of a fetus and placenta from a mother's body was not likely result in a positive outcome. As such, a number of lithopedions were only discovered upon autopsy, often decades after the mother first had experienced symptoms of pregnancy with no delivery. Women who experienced this phenomenon, and their physicians, would report the failure to deliver, often accompanied by pain and other symptoms for years, but many would experience the return of their menstrual cycles and even subsequent successful pregnancies and live births (4).

Another book from our History of Medicine Collection contains a lithopedion lithograph, an 1899 edition of Ernst Ziegler's General Pathology. In the process of describing the formation of a lithopedion in its "Arrests of Development" chapter, the text  uses such terms as "enshrouded" "mummification" -- interesting, therefore, that the accompanying lithograph depicts the tissue surrounding the fetus as looking like mummy's bandages in popular renderings. You may think that my instant recognition occurred because I work in the special collections unit of a medical library, but actually I knew what I was looking at because several months ago I read Lyz Lenz's piece on lithopedions on the blog Jezebel. Her article, which outlines the phenomenon and draws in a feminist reading of its surrounding folklore, was memorable to me as an example of how historical medical information can support contemporary cultural critique. Lenz describes the case of the lithopedion of Sens, concerning a stone fetus removed from the corpse of Madame Colombe Charti in 1582, believed to have remained in Charti's body for 28 years following a pregnancy at age 40. One of the attending physicians, Jean d'Ailleboust, acquired the lithopedion and wrote a pamphlet on the case and drew quite the fanciful accompanying image of the autopsy and extraction, which I tracked down via the National Library of France: In his pamphlet, Ailleboust attributed the stone fetus to a lack of warmth in the womb and dryness of the mother's blood. Lenz points out that this assignment of blame can be immediately woven into two larger historical or cultural narratives: The history of obstetrics is rife with examples of attributing fetal abnormalities to personal or behavioral failings of the mother. In addition, there are a number of myths or folktales across cultures that associate female coldness, absence, or malevolence with human petrification -- think Medusa or the Chronicles of Narnia (5).

In conclusion, our rare books are full of unusual surprises and serve as documentary evidence of social, cultural, and political attitudes that have shaped health & healing practices throughout history. Pretty neat!