Lecture by author and physician Dr. Victoria Sweet at UO in Portland


The lecture below, hosted by University of Oregon in Portland, is likely to be of interest to many of our local readers:

Prize-winning author and physician Dr. Victoria Sweet will share her story of how healing practices of the past have shaped her approach as a modern-day physician in her lecture “God’s Hotel: A Doctor, a Hospital, and a Pilgrimage to the Heart of Medicine.” The lecture will take place at Thursday, March 6th at 7:30 p.m. at the UO in Portland, White Stag Block, 70 NW Couch St.

During her clinical work as a medical student, Dr. Sweet became curious about the anima—that mysterious invisible force that animates the physical body. Several years later, she happened upon the works of Hildegard of Bingen, a medieval abbess who was a theologian, visionary, and medical practitioner. Thus began Sweet’s quest to understand the pre-modern view of the human body and healing, and her pursuit of a Ph.D. in the history of medicine. Serendipitously, her part-time job as a physician at San Francisco’s Laguna Honda Hospital—the last almshouse in the country—allowed her not only the time she needed to study and write, but also a living laboratory in which to practice some of the medieval healing skills she was researching. She learned to embrace the “efficiency of inefficiency,” and to get to know her patients on a deeply personal level, so that she could assist them in accessing their own inner source of healing—the veriditas, or “greenness” to which Hildegard refers in her writings. In short, Dr. Sweet’s Ph.D. studies and her more than twenty years of experience at Laguna Honda changed the way she understands and practices medicine.

The lecture is free and open to the public. For more information, or for disability accommodations (which must be made by February 26th), please call (541) 346-3934.
Posted by Maija at 12:35 PM No comments:

Crystal Rodgers, one of HC&A's indispensable student assistants, has favored us with a blog post! 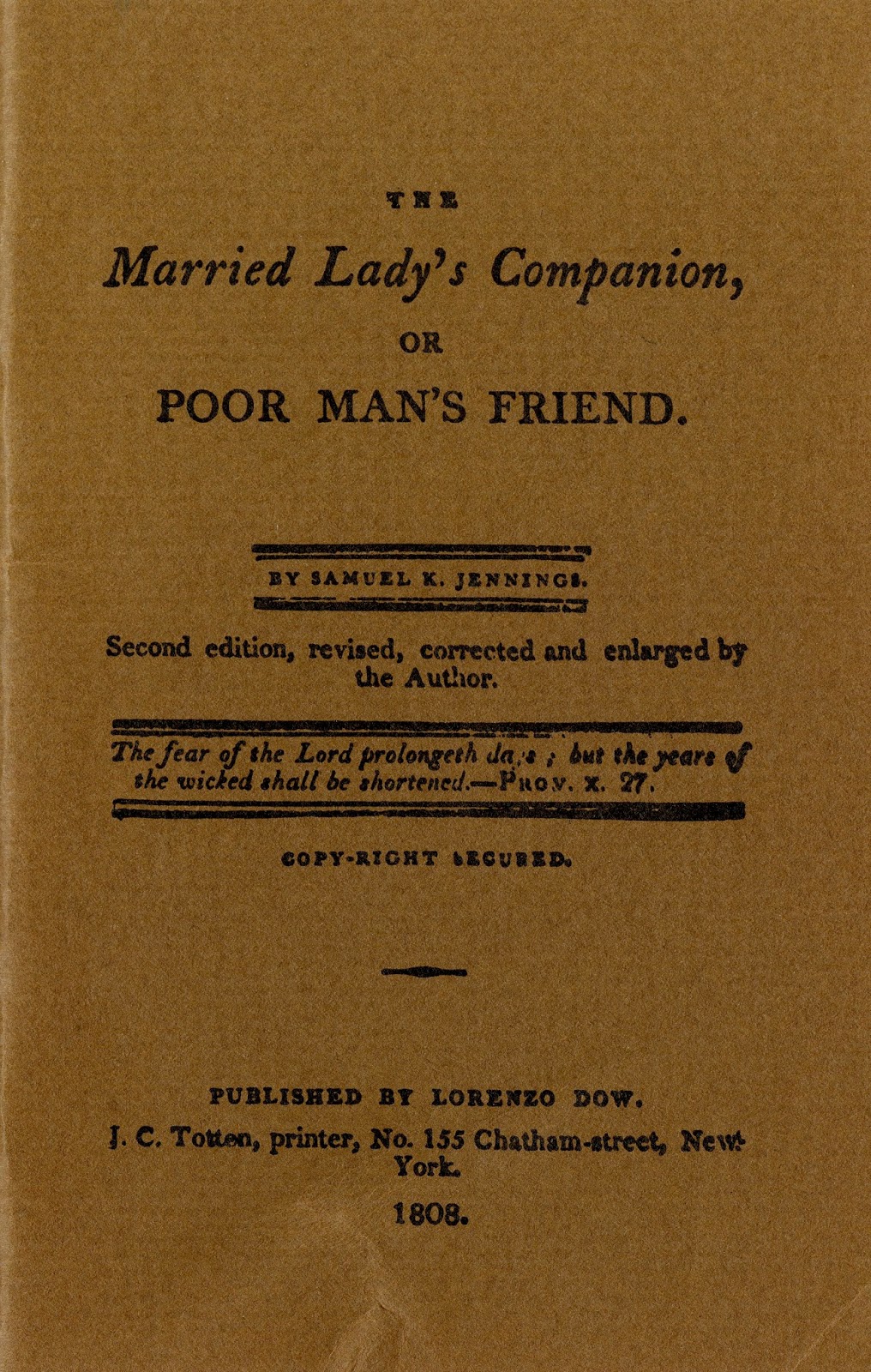 When accessioning new archival materials, one often comes across documents that remind us both how far we have come and how much further we have to go in dismantling sexist perceptions of women, marital relationships, and reproductive health. Such was the case when tending to the Quenten Scherman Medical Artifact Collection this past October. Among the 2 linear feet of medical and dental implements previously owned and used by Quenten Scherman, M.D. (1919-2003), are several gynecological and obstetrical instruments, including vaginal speculums, a Pelvifix obstetrical retractor, and obstetrical forceps.

Nestled amongst the artifacts was a small booklet entitled The Married Lady’s Companion, or Poor Man’s Friend*, written by Samuel K. Jennings and published in 1808. An instructional guide, the booklet informs women on how to appropriately conduct themselves as wives and mothers in order to ensure a stable marriage and a healthy pregnancy. An advertisement in the front of the booklet makes it clear that Jennings wrote with the poor woman in mind, stressing that the book be promoted to women living in rural, impoverished areas where physicians were scarce. The presence of this booklet amongst Sherman’s materials does provoke some questions; however, it is unclear how he obtained or utilized the text, if at all. Regardless, the booklet provides valuable historical context to the artifacts by illustrating the commonly held perceptions of women, particularly low-income women, and how these perceptions informed (and in some ways, continue to inform) reproductive healthcare.

The booklet contains only part 2 of the series, “An Address to the Newly Married Lady,” giving marital advice followed by information regarding common ailments in pregnancy such as heart burn and vomiting. Chapter titles include “Proper Conduct of the Wife Towards Her Husband,” “Wife Ought to Not Appear in the Husband’s Business,” “The Sure Way of Happiness in the Married State,” “Signs of Conception,” “The Pains Attendant on Pregnancy Perhaps Necessary,” and “Abortions."** Jennings begins by stressing that marriage serves as the only way for a woman to live a healthy and happy life, stating, “…your house is your only refuge, your husband your only companion. Should he abandon you, solitude, anxiety and tears, must be your unhappy lot.” Further advice instructs women to submit to their husband in all things, never accuse a man of infidelity, and if a woman must make the decisions regarding the household, to always make it appear as the husband’s decision.

The text also illustrates the influences of race and class on perceptions of pregnancy and motherhood. For a woman not used to physical labor (in other words, wealthy women), Jennings advises she abstain from any physical activity. He goes further to say,“The poor man’s house is filled with healthy children, while the rich with difficulty raises up an helpless heir…The female slave is healthy and prolific, while the mistress is sickly and barren” (p. 78). Such assumptions reinforce the perception of the white, wealthy woman as fragile and in need of protecting while also reinforcing the commonly held racist stereotype of the hypersexualized black slave, completely obfuscating the mental and physical violence of poverty and slavery. It is critical to take note of such evidence of these belief systems as a means of better understanding how these legacies of racism, sexism, and classism continue to influence legislative decisions regarding women’s reproductive health and family welfare.

You can read a digitized copy of the four part booklet in its entirety, generously made available by the Medical Heritage Library. You can also view a physical copy of part 2 of the booklet here at OHSU’s Historical Collections & Archives as well as other archival materials and medical artifacts related to obstetrics and gynecology.

Posted by Historical Collections and Archives Staff at 1:49 PM 2 comments: