Exhibit of rare books on primatology - closing end of December

If you haven't seen our current exhibit Selected Works of Art and Science, you still have a few more weeks. The exhibit is on the OHSU Marquam Hill Campus, BICC Building 3rd Floor, Main Library lobby. 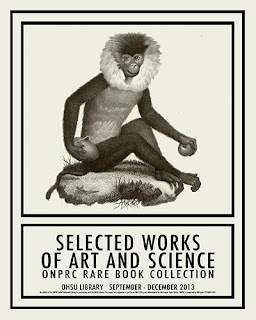 OHSU Library was privileged to be able to share these rare books from the collection of the Oregon National Primate Center's (ONPRC) Isabel McDonald Library. The exhibit celebrates the completion of ONPRC Library's rare book digitization project, funded by the Library Services and Technology Act via the Oregon State Library.

The exhibit will close at the end of December, and the books will return to their home at the ONPRC. But never fear, their digital surrogates will remain available to the public as a digital collection.
Posted by Maija at 2:02 PM No comments:

J. David Bristow was interviewed in 1997. He discussed his experiences at the University of Oregon Medical School, Multnomah County Hospital, the VA Hospital, and the U.S. Navy. He reflected on his work for the medical school's Department of Cardiology, including his experiences with notable figures such as Howard "Hod" Lewis and Herbert Griswold.

Bernice Orwig Cochran was interviewed in 1997. She remembered her recruitment to the medical school's nursing program by Elnora Thomson, and her work in turn, recruiting nursing students from across the state of Oregon. She speaks of the general development of nursing education, and shares observations about the variety of nursing programs in the state.


Gwynn Brice Dockery was interviewed twice, in 1997 and 1998. Drawing on her career in university administration, she noted many ways in which the medical school and hospitals responded to changes in health care and educational policy through the mid-20th century.

Ruby Hills, Kay Fisher Hilterbrant, and Edith Moore Richards were interviewed together in 1998. The three nurses discussed their experience during World War II, when they were recruited for service at the 46th General Hospital.

Transcripts and recordings of interviews from the OHSU Oral History Program are also available for checkout from the Main Library.
Posted by Maija at 1:51 PM No comments: