PANIC IN THE RECORDS ROOM!

The year 1931 was an especially hard one on the Hill. It was part of a cascade and congruence of circumstances guaranteed to make the most stolid and steady administrator want to tear their hair out. The Great Depression was in its 14th month at the beginning of year. Staff were flooded with desperate people needing medical help. The pressures on creation and maintenance of medical records were multiple. The young health facilities on Marquam Hill included the Multnomah Co. Hospital (1923), the Doernbecher Memorial Hospital for Children (1926), as well as the students and faculty of the University of Oregon Medical School who helped staff them. As the full scale of catastrophe became apparent, the People’s Free Dispensary moved up the Hill to help create the modern Outpatient Clinic. It brought with it a large and needy clientele, whose eligibility had to be checked by staff social workers, adding to the number of records created.

These in turn had to be sifted from a horde of out-of-county people in equal need, but ineligible. The problem became so bad that Poor Dumping Laws were passed with fines of $100 - this when a top plumber made $1.75 cents per day.

A delicate dance for limited funds and cooperation took place between federal, state, county, municipal and private entities, entailing its own flood of correspondence. Much of this concerned a variety of work-relief projects, like a wood lot downtown, which required medical oversight for public health reasons. Police were needed more to enforce the Poor Dumping Ordinance, but preferred to worry about Revolution at the wood lot. The doctors worried more about Cholera from common drinking cups.

Prohibition rules also applied, with its own mountain of red tape needed to procure even enough alcohol for lab work and make sure it wasn’t made into hooch.

Finally, in 1931 the City of Portland embarked on an ambitious campaign which totally changed everything from a records and postal standpoint - to change ALL the street and house addresses in town to make for a more comprehensible street grid - giving us our current geographically-co-ordinated system.

All these things produced an avalanche of work on the head of Laura Martin, R.N., chief of Medical Records.

She had arrived in 1926 as a freshly minted nurse at Doernbecher’s creation, admitting its first patient, and being nurse shift supervisor for the first six months. Then she was put in charge of records, which became her world. She got her 35-year pin in 1962.

To save the day, enter technology. The use of pneumatic communication tubes in the dental school has recently been described: www.ohsu.edu/xd/education/schools/school-of-dentistry/about/upload/,

A symbol of Industrial Age efficiency, with networks in some places sometimes hundreds of miles in length, they are still used for specimen transport on the Hill today. But its first application was less successful.

It seems that the great demand saw a rush order placed in 1931 with the Lamson Pneumatic Tube Co. with critical miscommunication on the contract requirements, with the consequence of wrong components being used, requiring extra air propulsion to get the tubes through - with explosive results.

Martin listed a variety of complaints. The system was incredibly noisy, and dusty. Canisters got stuck in the tubes. Some canisters made a round trip without stopping. Some canisters came out as if shot from guns. They caromed off walls. They shattered, spewing records and specimen samples. “It’s like a bombardment here!”, Martin complained. “Poor Miss Foster is just about a wreck! I don’t know how much longer we can stand this.” Alas, Miss Foster, already wilting under the pressures of records work, had to be let go for shattered nerves.

Relief was not soon in coming. A tedious correspondence ensued resulting in much finger-pointing, grudging service calls and demands for payment. Ultimately, it would be almost two years before the situation was able to calm down to a dull roar, but finally in 1933 Martin’s crew could once again process the records of the sick instead of playing duck and cover.

The last days of the Samuel L. Diack Science and Engineering Library

The Samuel L. Diack Science and Engineering Library, part of the campus of the former Oregon Graduate Institute of Science and Technology, officially closed on June 28 of this year. You can read an appreciation of the library and its staff on the OHSU Library blog. Since the closure, OHSU Library staff have been working to move the  Diack's collections to their new home here on the hill. On a trip to review part of the book collection, I snapped a few photos of the nearly-empty building that houses the library: 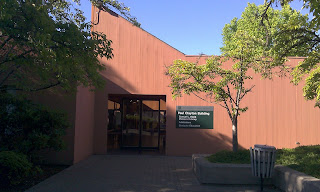 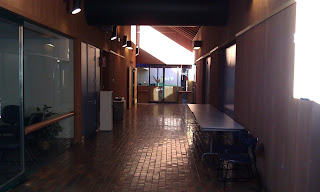 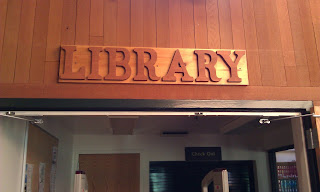 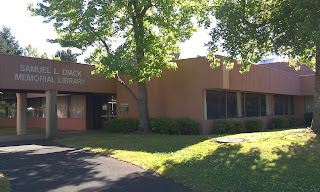 Karen and other HC&A staff have also been collaborating with SEL staff to ensure that archival collections and artifacts are preserved - not just records of the library, but of many of the offices and labs that were part of the campus. Unique artwork, photographs, and memorabilia have also made their way to us.
Posted by Maija at 1:26 PM No comments:

Our volunteer Kathleen has added two new transcripts to our new OHSU Oral History Collection in the Digital Resources Library.

Robert Koler, M.D. was interviewed in 1997. He discussed his education, internship and fellowship at University of Oregon Medical School in the 1940s, notably his work with hematologist Edwin E. Osgood. His later work as a faculty member, researcher, and administrator is also covered, including his role in the development of the Department of Molecular and Medical Genetics.

Charles M. Grossman, M.D. was interviewed in 2008. He discussed his education, his role in the first successful use of penicillin in the U.S., and the challenges and achievements of his long career as a physician, researcher, and activist. Foreign travel is also emphasized. He shares his observations on issues related to public health and social justice.

Transcripts and recordings of interviews from the OHSU Oral History Program are also available for checkout from the Main Library.
Posted by Maija at 12:52 PM No comments: