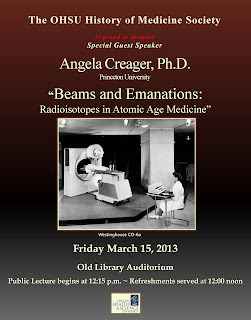 Angela N. H. Creager is the Philip and Beulah Rollins Professor of History at Princeton University. Her research focuses on the history of 20th-century biomedical science. Professor Creager’s first book, The Life of a Virus: Tobacco Mosaic Virus as an Experimental Model, 1930-1965 (2002), shows how a virus that attacks tobacco plants came to play a central role in the development of virology and molecular biology. Her second book, Life Atomic: A History of Radioisotopes in Science and Medicine, will be published by University of Chicago Press in 2013. She is also the coeditor of three volumes, most recently Science without Laws: Model Systems, Cases, Exemplary Narratives (2007). Professor Creager graduated from Rice University with a double major in biochemistry and English (1985) and completed a Ph.D. in biochemistry (1991) at the University of California, Berkeley, where she developed an interest in the history of biology. Supported by postdoctoral awards, she retrained as a historian of science at Harvard University and MIT, and joined the Princeton History Department in 1994. She served as Director of Graduate Studies for the Program in History of Science and is affiliated with Princeton’s Program in Gender and Sexuality Studies. She is currently serving as Vice-President of the History of Science Society.

The lecture is free and open to the public. If you have a disability and need an accommodation to attend or participate in this event please contact Maija Anderson (503-418-2287) at least five business days prior to the event.