A recent acquisition for our rare book collections is Thomas Smethurst's Hydrotherapia; or, The Water Cure... (London: J. Snow, 1843). 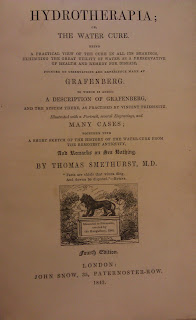 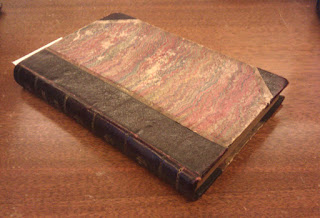 In this book, Smethurst reported the work of Vincenz Priessnitz, a layman who founded the modern practice of hydrotherapy in Grafenburg, Austria. It includes detailed descriptions of a wide variety of hydrotherapeutic baths, with some charming illustrations of rather uncomfortable-looking patients: 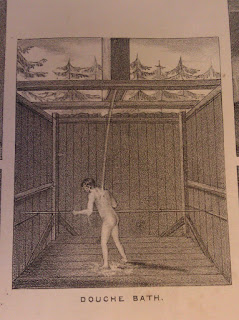 Above: The douche bath. "On entering the bath, wash head and chest, then fearlessly go under the stream." 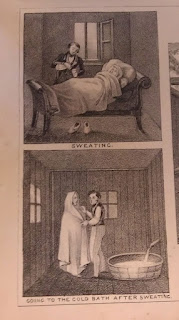 Above: Sweating ("The figure resembles an Egyptian mummy...the invalid remains in the blanket until perspiration has continued the required time"), followed by a cold bath ("The duration of the cold bath greatly depends upon the heat of the body arising from the perspiration...Much activity, and friction of the whole body with the palms of the hands, whilst in the cold bath, is strictly enjoined").

It appears that the author is the same Dr. Thomas Smethurst who, 16 years after the publication of this book, became notorious in Victorian society as a bigamist and convicted (then acquitted) murderer in the so-called "Richmond poisoning case."

Worldcat shows 10 other copies of Hydrotherapia in the U.S., with our copy as one of 2 on the West Coast.  This book is part of a collection of historical medical books, including many other works on alternative medicine, which were donated by Mrs. Cynthia Edwards this past spring.
Posted by Maija at 1:12 PM No comments: