Beginning in 2010, Historical Collections & Archives has worked with Katie Riley, Ed.D and emerita Professor of Public Health and Preventive Medicine, to document the history of her department and preserve her personal papers. Like many of our faculty, Katie's interests extend far beyond the boundaries of her profession: In 2010 and 2012, Katie ran for Oregon State Representative.

I was delighted when Katie told me she had saved all her campaign records and planned to donate them to the archives. We received them this morning, along with more records of her work with the Oregon Public Health Association. While Katie didn't win her bids for state office, her campaign records are a slice of Oregon's political life and are part of a rich history of OHSU faculty engagement with Oregon's communities.
Posted by Maija at 2:53 PM

New acquisitions in the history of medicine

Through a happy accident of accounting, I was able to make several unexpected new acquisitions for our History of Medicine collection: 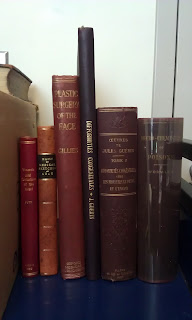 From left to right:

Pott, Percivall. Observations on the Nature and Consequences of Wounds and Contusions of the Head: Fractures of the Skull, Concussions of the Brain, &C. London: Hitch and Hawes, 1760.  Pott was a major figure in the evolution of surgery in Great Britain, and made important contributions to the treatment of head injuries.


Gillies, Harold. Plastic Surgery of the Face: Based on Selected Cases of War Injuries of the Face Including Burns. London: Frowde, Hodder and Stoughton, 1920. Gillies standardized existing surgical techniques to establish the principles of modern plastic surgery.


All five will be cataloged and available for research in Historical Collections & Archives.