New residents in the History of Medicine Room

In the last couple weeks, our colleagues in cataloging and acquisitions returned a bumper crop of new addtions to the History of Medicine Collection, including some extraordinary rare books from the 17th-19th century. The following are just some highlights:

Anderson, William. System of Surgical Anatomy. As Connected with Inguinal and Femoral Hernia, Tyeing the Iliac Arteries, and the Operation of Lithotomy Part First, On the Structure of the Groin, Pelvis, and Perineum. New York: Seaman, 1822.

Cowper, William. Myotomia Reformata, or, An Anatomical Treatise on the Muscles of the Human Body. London: R. Knaplock, 1724. See also my announcement of the acquisition in February.

All are available for research in HC&A.
Posted by Maija at 9:57 AM No comments:

More on OHSU crests and logos

Following up on my post last week about the evolution of university crests, a colleague in Strategic Communications passed along some valuable information about how the university's visual identity developed from the 1970s to the present.


First of all, she pointed out that the flame symbol I referenced is not actually the university logo:

"That artwork, along with the spelled out name of the university is the OHSU logo [see below]. The flame is only used by itself rarely, and subject to review before use." 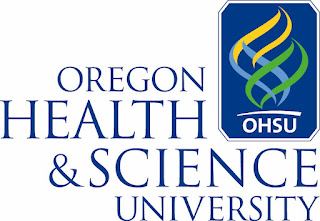 She also shared some highlights between 1974 (where my research left off) and the development of the current logo:


"In 1981 the University of Oregon Health Sciences Center (UOHSC) changed its name to Oregon Health Sciences Center (OHSU). The caduceus logo (frequently jokingly referred to as the "snake in the box") was replaced with the OHSU wordmark [below]. This evolution was spurred on by comments from the  School of Dentistry and School of Nursing that the caduceus related to medicine only and that their disciplines were not represented with this mark. It was also a useful way to showcase OHSU's evolution.

"Later, the mark was shortened to just OHSU and incorporated the words Where Healing, Teaching and Discovery Come Together.

"In 2006 the university updated the mark and through a long, multifaceted and strategy-based process made the move to the current OHSU logo...The OHSU logo was introduced in 2006 to support OHSU’s role as a knowledge leader. Each component has significance:

The words “health” and “science” in the university’s name are emphasized in the logo by size and weight to draw attention to our novel position among local competitors and other universities throughout the state.

The word “science” is the anchor for the logo’s visual element: a flame.


The flame, a historical reference point for OHSU that has long been recognized as a symbol of Doernbecher Children’s Hospital and a rallying point for children and their families, is also a symbol of:

It's great to be able to add this information to our documentation of OHSU's visual identity!
Posted by Maija at 3:13 PM No comments: