Dr. Peter Goodwin, champion of the Oregon Death with Dignity Act, died on March 11 at the age of 83. Dr. Goodwin suffered from a rare and fatal brain disorder, and chose to exercise the right he had worked to secure for Oregonians. Originally from South Africa, Dr. Goodwin joined the faculty of University of Oregon Health Sciences Center in 1976. He practiced family medicine at OHSU until his retirement.

Dr. Goodwin was interviewed for the OHSU Oral History Program in 2008 - he spoke about his involvement with the Death with Dignity Act, his outlook on doctor-patient relationships, and the role of family practitioners. The circulating DVD and transcript are available from the main library. Transcripts can also be requested via homref@ohsu.edu
Posted by Maija at 3:11 PM No comments:

Through our colleagues at Chicago Area Medical Archivists, I discovered this University of Illinois-Chicago's digital collection of brain speciments collected by Percival Bailey. 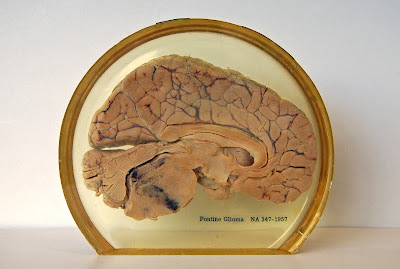 Percival Bailey (1892-1973) made important contributions to the fields of neurosurgery, neuropathology, and psychiatry, among other fields. He is noted for his investigations with Harvey Cushing, which led to the 1926 publication of A Classification of the Tumors of the Glioma Group on a Histogenetic Basis with a Correlated Study of Prognosis. We have several other publications by Bailey in both HC&A and the main library collections.
Posted by Maija at 8:45 AM No comments: