This week we received our first donation of papers of David K. Grandy, Ph.D., Professor in the Physiology and Pharmacology Department. Dr. Grandy's research focuses on neurotransmitters, with the goal of developing new drugs to treat drug addiction and mental illness. His work also seeks to raise awareness of the biological causes of mental illness, reducing the social stigma faced by its victims.

During our first visit with Dr. Grandy, Karen and I were treated to a guided tour of his busy lab. The Grandy Lab conducts research on dopamine signaling in the brain, and has also identified three previously unknown signaling systems.

We look forward to continuing to work with Dr. Grandy to preserve the records of his research in the university archives.
Posted by Maija at 10:00 AM

We're fortunate to have recently acquired a copy of one of the earliest American books on dentistry. 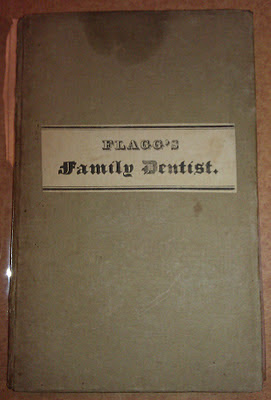 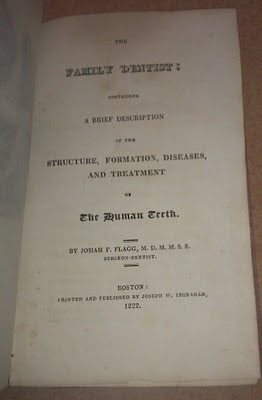 Worldcat shows 33 other copies, with only 2 other copies on the West Coast (at UCLA and UCSF).

Josiah Foster Flagg (1788-1853) was the son of Josiah Flagg (1763-1816), who is known as "the first native-born American dentist." The younger Flagg studied medicine in Boston under Dr. John Collins Warren. Flagg practiced a variety of professions, including medicine and anatomical illustration, before settling on dentistry. He devoted much of his career to improving dental technology and educating the public about dental care. Flagg and his brother John Foster Brewster Flagg (also a dentist) were both involved in the controversy surrounding the discovery of etherization in the mid-19th century.

Flagg's book is aimed not at dentists or students, but at a popular audience. He describes his purpose as "1. To give, in as few words as possible, a clear description of the structure and formation of the teeth...2. To give a brief sketch of the most common diseases to which the teeth are liable; together with such directions, relative to their treatment and preservation, as shall enable the reader to take the necessary care of his own teeth...3. To guard against the injurious practice of ignorant operators."

The book includes a striking frontispiece, probably created by Flagg himself. The text describes it as "a representation of the bones of the face, in which the first and second sets of teeth are so exposed as to show their relative situation in both jaws, as they are found in a child at about the age of six or seven years." 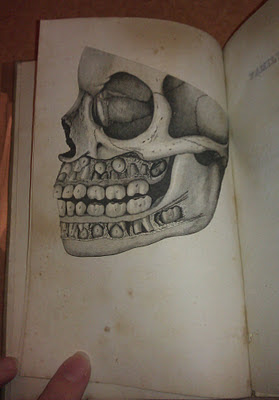 This title will be cataloged for our History of Dentistry collection, where it will join many other works by Josiah F. Flagg, and one by John Foster Brewster Flagg.
Posted by Maija at 9:57 AM